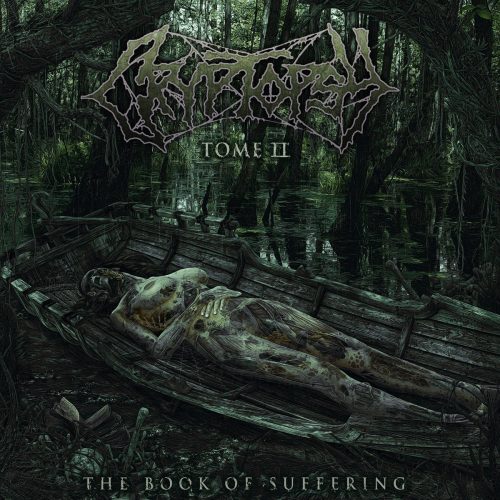 Cryptopsy tell you to “Fear His Displeasure“, but if you want to know what real fear is, take a turn in a Cryptopsy mosh pit. Those of us who’ve seen Cryptopsy live over the last few years have witnessed the spectacle of the band (metaphorically speaking) regularly injecting their audience into a cyclotron, quickly spinning it up to extravagant speeds, and then smashing it apart so that all the occupants go careening into a roiling mass of human wreckage.

It turns out, however, that it’s almost as much fun to watch the band (or in this case, two of the members) without an audience, standing against a black backdrop, displaying the mechanics of what they do to create such bruising, bone-breaking, blood-spraying mayhem in a live setting. What we’re talking about is a new play-through video that we’re happily premiering today, which features Cryptopsy guitarist Chris Donaldson and bassist Olivier Pinard performing their parts of “Fear His Displeasure” off the band’s new record The Book of Suffering – Tome II. 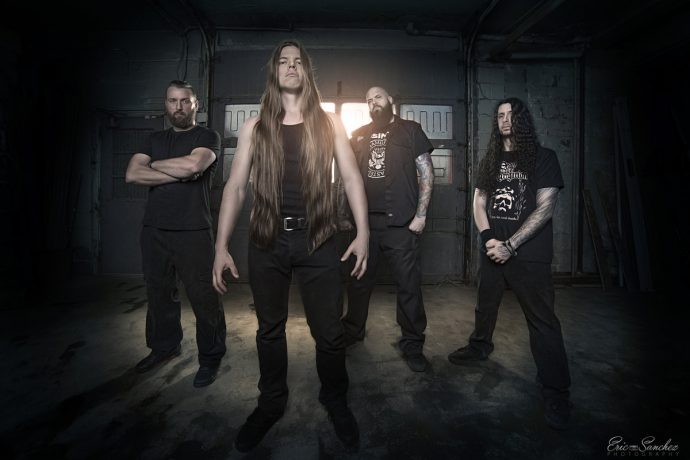 As spectacles go, the video might not be a match for a Cryptopsy mosh pit (few things are), but it’s still a delight to see — just as much as the song is a savage delight to hear. The music is a seething, roiling, brutally battering experience made for wrecking necks and fracturing skulls. Mainly fast and ferocious, the song is also brooding and brutish. When Pinard plucks the bass strings, it sounds like bombs going off. When Donaldson’s fingers really start to fly, it’s as if we’re in the middle of a school of giant piranha feeding in a frenzy. Watching their dexterity in action is icing on the cake.

We don’t see drummer Flo Mournier in the video, but he makes his presence felt. Holy hell, does he ever! On the other hand, the song as performed here is sans vocals, so as not to distract from what these two string-slinging wizards are doing — but if you’d like to hear the studio recording of the song, with Matt McGachy‘s barbaric vocals in the mix, we’ve included a lyric video for it just below the film we’re premiering, along with a video for another song off the new record, “Sire of Sin“.

All four tracks on Book of Suffering – Tome II are well worth your time, and you can pre-order it now in advance of its release on October 26th. The EP was produced, mixed, and mastered by Chris Donaldson at The Grid studio in Montreal, with visual art provided by Remy Cooper from Headsplit Design. The video was directed, filmed and edited by Chris Kells and produced by Ryan Andrade from FTB Visuals.

TRACK LIST:
1. The Wretched Living
2. Sire Of Sin
3. Fear His Displeasure
4. The Laws Of The Flesh

2 Responses to “AN NCS VIDEO PREMIERE: CRYPTOPSY PLAY THROUGH “FEAR HIS DISPLEASURE””