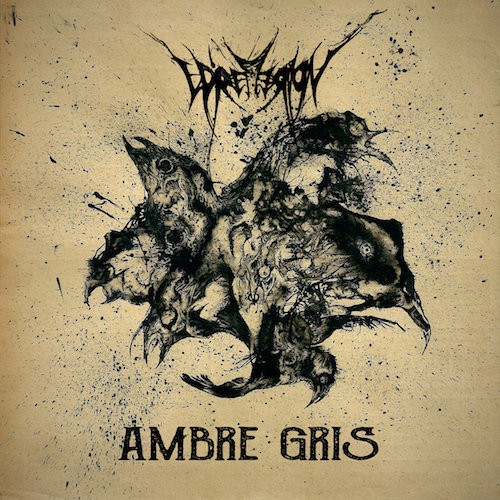 I’ve been grappling with words, trying to find the best means of capturing the impact this new song has  made on my impressionable mind, and only an agreed deadline has brought my struggles to a halt. I wonder why I struggle, since you’ll be able to listen for yourselves, but I guess it comes from a need to share my enthusiasm in a way that honors the artists who brought it about. So, here we go…

The song here is the title track from Ambre Gris, the debut album by the French avant-garde black metal band Edremerion. Two EPs preceded this album, but the line-up has changed since those were released, and I confess that I haven’t heard them anyway. Even if I hadn’t learned through experience that the labels responsible for this release dependably make good choices, I would have checked out Ambre Gris based on the labels’ comparative references to the likes of Ved Buens Ende, DHG, Ulver, Fleurety, Virus, and Satyricon.

“Ambre Gris” (the song) is just shy of 10 minutes long, but there’s no sense of time passing as the music engulfs you and wildly spins you away around its twisting axis. It starts, without warning, in a conflagration, a bonfire of blasting drums and deranged, boiling, tremolo riffs coupled with equally maniacal bass pyrotechnics. And just as suddenly, the sound transforms into beautiful, glimmering sounds that spiral and warp. It doesn’t take more than the opening and that transformation to teach you that you’re privy to something really interesting, and to kindle intrigue in what will happen next.

What happens next is the launch of a head-nodding bass-and-drum drive, with the guitars reaching heights of extravagant, flaring sound. The voice is a white-hot mania, the riffing swirls, the bass bursts with vibrancy. You become submerged in waves of guitar incandescence, the sound a blend of glorious ecstasy and fracturing reality.

There’s a subsidence in the surge, and the notes ring out in peals of minor-key madness, and become shooting stars of brightness over borealis-like sheets of gleaming sound, barely contained by the methodical punch of the snare and the magma-like froth of the bass. The wash of sound subsides even further, to be replaced by a layering of craggy, croaking spoken words, moody bass notes, and strange, hallucinogenic fretwork — and then the song erupts again in a boil of brain-splintering madness, the roiling guitars manifesting a shattered sanity, the rhythm section engulfed in its own lunacy, the voice crying out as if being impaled by a blizzard of broken glass.

And then everything abruptly stops, leaving the listener in a state of bewilderment and vibrating bliss.

Okay, you can tell that I’ve really been swept off my feet by this track. I will be most eager to hear the rest of the album — though like me, you can hear one more track immediately, since “Deûle” has been previously released, and I’ve included the stream below. If you enjoy this song, you’ll want to hear that one, too.

Ambre Gris will be co-released by Symbol Of Domination (Belarus) and Anesthetize Productions (France) on November 2nd, in a jewel-case CD edition with an 8-page booklet.

One Response to “AN NCS PREMIERE: EDREMERION — “AMBRE GRIS””