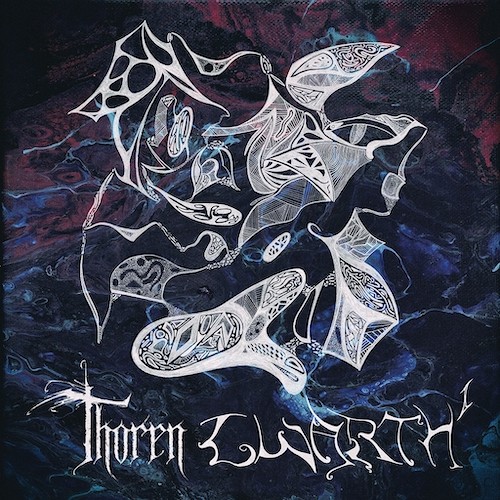 Instrumental metal, perhaps more so than metal with vocals, is a risky endeavor with mixed results. In addition to the risks of mediocrity (which are certainly not unique to solely instrumental performances), there’s the further risk that even when the music is excellent, it can seem to cry out for a voice (at least in the reception of listeners). You can expect to hear the unique dimensions of sound that vocals might add, and be disappointed when they remain absent.

The Detroit-based instrumental death metal band Thoren avoid these risks, not only because the music is so astonishingly good, but also because it’s impossible to imagine what vocals might add, or perhaps more to the point, how anyone could perform vocals over these bewildering sonic creations that would fit in any coherent or satisfying way. As proof, we offer “Daleb Dath“.

The song falls 10 seconds shy of three minutes in length, and it left this listener gasping for more. It’s so explosively exuberant and performed with such extravagant aplomb that it’s hard to imagine how anyone (whether in the band or in the audience) could reach the end the song without a big smile on their face.

In this relatively compact space of time, the band expose you to a cavalcade of high-speed, string-bending flurries that generate tones which dart like hummingbirds made of flame or shriek like torture victims, along with eruptions of jittery jabbing riffage and bone-breaking percussive bombast. There’s also a marvelous mid-paced segment that blends bass-heavy brutishness, blaring guitar fanfares, and blinding-fast drum athleticism. And all of these head-spinning (and often abrasive) machinations are tied together by the recurrence of strange, blurting pulsations of sound that prove to be paradoxically infectious and by bursts of pile-driving destructiveness.

Flashes of Blotted Science, Dysrhythmia, and Gorguts come to mind (among others) in this unconventional but electrifying blast, which is all to the good.

This isn’t the only track created by these mad geniuses. In fact, Thoren recorded 19 of them, and split them into two albums. “Daleb Dath” appears on Gwarth I, which will be released on November 9th by Drylands Records. Gwarth II will see release at some point in 2019. These two full-lengths follow Thoren’s debut album Brennenberg, which was released in 2016 (and is also well worth your time).

On this new album, the Thoren core of guitarist Anthony Lipari (Evilyn, Vihaan) and bassist Joseph Paquette (Evilyn) are joined by a pair of exceptionally talented session drummers: Alex Cohen (live for Malignancy, ex-Pyrrhon, Epistasis, Involuntary Convulsion, etc.) — who calls the album “easily some of the most thought-provoking, complex, and unique music I’ve played on” — and Kenny Grohowski (Imperial Triumphant, Secret Chiefs 3). It’s Grohowski whose handiwork is on display in “Dalab Dath).

The album also features guest vocals by Maggie Cocco on the song “Kos” — so perhaps it’s not entirely impossible to interweave a voice in what Thoren have cooked up this time.

Check out our premiere below, along with streams of two previously released singles, “Tyranny” and “Galvorn”.