However, in conversation with my friends/bandmates recently we got to chatting about the new Beyond Creation and Gorod releases, and I realised that these two would also make great fodder for a co-feature of their own, not only because both bands are going to be on tour together very soon, but also because both Algorythm and Aethra find their respective creators making an effort to expand and redefine their sound… although one of the two albums is certainly more successful than the other in this regard.

With Algorhythm the Beyond Creation crew have made the conscious and explicit decision to expand their sound in a more purposefully “progressive” direction, electing to extend their inherent proggy-proclivities further along their natural axis as a way of moving beyond the paradigm they established on The Aura and Earthborn Evolution.

Now, on the surface this is a smart choice as although both …Aura and Earthborn… were fantastic albums which made a significant splash in the Tech Death scene (and beyond) on their release, it’s entirely possible that a third album in the exact same style would have fallen afoul of the age-old law of diminishing returns, regardless of its overall quality.

Unfortunately, although the ambition behind this decision might be laudable on paper, the actual execution is much more uneven than either the band, or their fans (a group I count myself among), would have hoped.

That doesn’t make this a bad album by any means, it’s just that the Quebecois quartet occasionally fall into some of the more egregiously ill-advised tropes of “Prog” – unnecessary intro/interlude tracks, meandering song structures, introductions that feel divorced from the rest of the song – in ways that seem, quite frankly, like they could (and should) have been easily avoidable, and which serve to make the album somewhat less than the sum of its otherwise not inconsiderable parts.

Still, the good points of the record are very good indeed, and deserve to be highlighted on their own terms, regardless of whether you or I might think that the full package fails to live up to the exceedingly high standards of its predecessors.

“Entre suffrage et mirage”, for example, is a great track which, despite sticking closely to the standard Beyond Creation formula, still delivers the goods with all the verve and vitality which we’ve come to expect, while both the expansive, expressive strains of “The Inversion” and electrifying closer “The Afterlife”, as well as the utterly scintillating title-track (which displays a much greater sense of restraint and introspection than we’ve seen before from the band) demonstrate quite clearly that, when they have a clear direction in mind, the band’s increasingly progressive mindset can really work wonders.

It is, however, a little bit amusing that one of the album’s best tracks – the pulse-pounding “In Adversity” – also happens to be its shortest, simplest, and most aggressive cut, suggesting another alternative direction for these four Canuckleheads if they ultimately decide that this more proggy experimentation hasn’t paid off.

In the final reckoning, despite the fact that a fair proportion of Algorhythm simply doesn’t quite live up to the band’s own high standards of excellence, I’m still very much looking forwards to seeing them when they hit the UK again at the end of next month, and am hopeful that even the lesser songs from this album will come to life much more in the live setting. 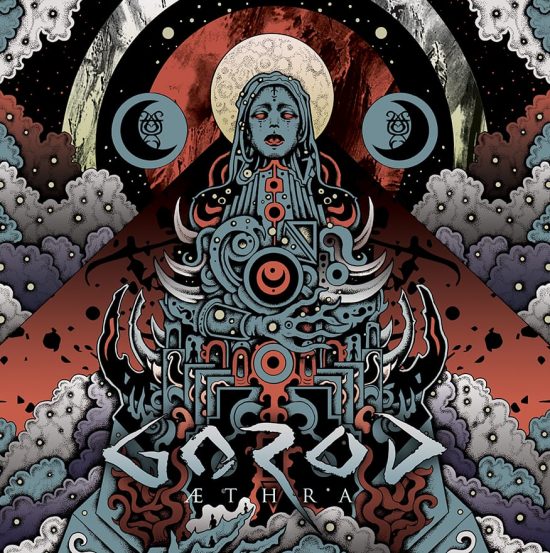 In direct contrast to their Canadian brethren, French fivesome Gorod have elected to significantly strip-back and slim-down their sound on their sixth album, a move which not only elegantly sidesteps the progressive bloat which afflicted the above record, but which has also resulted in the creation of one of the most instantly impressive, not to mention consistently catchy, albums of the band’s career.

Largely eschewing the outlandish eccentricity which characterised their previous full-length (2015’s A Maze of Recycled Creeds) in favour of a hookier and more song-based approach this time around, killer cuts like “Bekhten’s Curse”, “The Sentry”, and the spellbinding “And the Moon Turned Black” (to name but three of the album’s many multi-faceted delights) sound more lithe, more agile, and more spontaneous, than ever before, and practically pulsate with a sense of energy and vibrancy which is as intensely infectious as it is practically irresistible.

In many ways Aethra reminds me strongly of Equivoke, the phenomenal final album by Russian Tech-Death sensations Hieronymus Bosch, in that it successfully marries the band’s obvious (and unapologetic) technical talents and passion for creative weirdness to a form of keenly focussed, goal-oriented song-writing which sees hookiness and technicality not as two separate elements of the group’s sound, but as two complementary sides of the same coin.

As a result, songs like the brilliantly bombastic “Hina”, the blistering (yet strangely beautiful) “Chandra and the Maiden”, and the dynamically devastating “Goddess of Dirt” are an absolute joy to listen to from start to finish, and remain so whether it’s the first, tenth, or one-hundredth time.

And while all members of the band clearly brought their A-game to the table this time around, some special credit must definitely be given to the varied yet visceral vocal performance put in by singer Julien Deyres, who delivers a truly striking blend of belligerent barks, gritty growls, and surprisingly emotive semi-clean crooning across the length and breadth of Aethra, in a manner which frequently – such as as during the poignantly proggy title-track, or the utterly fabulous “A Light Unseen” – recalls the similarly varied vocalisations of Loic Rossetti from The Ocean.

If there’s one minor flaw to be found here it’s that opener “Wolfsmond” is, arguably, the weakest (or, perhaps more accurately, the “least strong”) track on the album, but when the rest of the record is as packed to the proverbial gills with catchy riffs, clever twists, and boldly unconventional hooks, as this one is, it’s very easy to forgive such minor infractions.

So, in the end, it looks like “less” (in relative terms at least) truly can be “more” sometimes!

2 Responses to “A(NOTHER) TALE OF TWO ALBUMS: BEYOND CREATION AND GOROD”