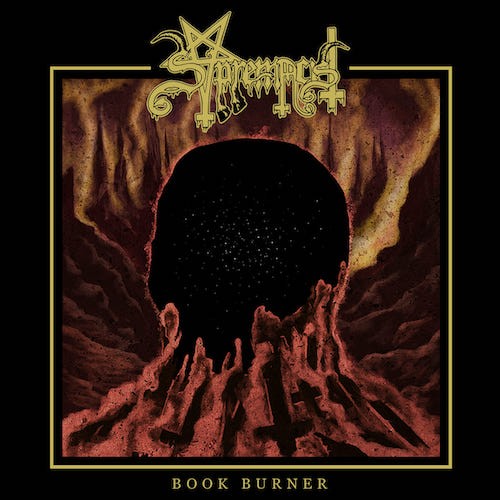 I can’t quite claim that Svpremacist has provided the bookends for my metal listening in 2018, but it’s close. ‘Twas early February when I encountered this Israeli band’s debut EP, with the smile-inducing title of Black Fuck You Metal, and now on this Samhain day they’ve just discharged a follow-on EP, the news of which I’m happily helping to spread around through this post.

The title of the new one is Book Burner, but have no fear, the band continue to proclaim loudly: “Svpremacist plays Black Fuck You Metal exclusively!” They have dedicated this new release “In honor of South American Metal warriors past and present”. 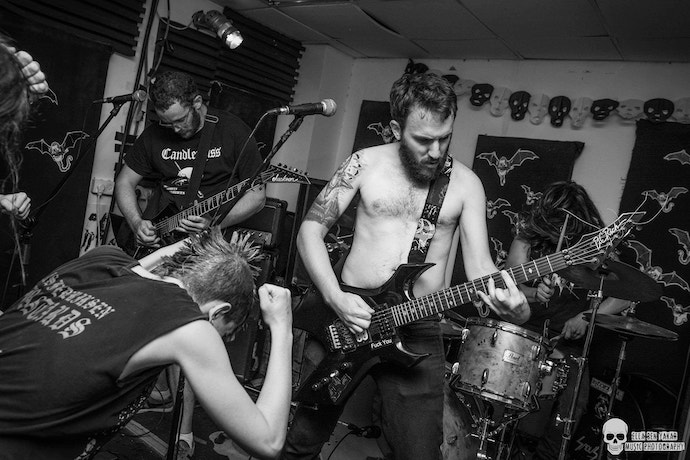 My grinning didn’t stop with the title of the group’s debut EP. The music did have a kind of fierce, feral, fuck-you energy, but it turned out to be more accomplished than I might have guessed from the title. As I wrote soon after discovering that little gem:

“In the main, what Svpremacist dish out is raw, ripping, take-no-prisoners black thrash. High-speed drumming, turbocharged riffing, and vicious, shrieking vocals provide the backbone of the music, and all of that is so electrifying and so infectious that I’d probably be happy as a clam if that’s all there were. But there’s more.

“There’s ‘classic’, arena-ready heavy metal DNA in this genome, too, leading to changes in the rhythms and the riffing (and to eye-popping solos) that make you sit bolt-upright when they happen. And these really are true, well-structured songs, with variations in the pacing and the mood that make them even more interesting than if they’d just been balls-to-the-wall thrashing straight through.”

All of those impressions are revived again in listening to the two songs on Book Burner, but I think it’s fair to say that both tracks are even more diabolically unhinged and unpredictable.

The title track is lurching and ghoulish, swinging and swaying like the sulfur-steeped celebrants at a demonic carnival — and it just grows increasingly frenzied and demented as the music unfolds. Fanfare-like chords ring out; the drummer engages in bursts of unpredictable athleticism (and periodically discharges booming detonations); skittering fretwork injects a feeling of febrile ferocity; searing solos spurt from the mayhem, hot enough to singe your eyebrows; the vocalist shrieks like a blood-lusting madman; the song becomes a boiling cauldron of deviant ecstasy.

The second track, “Unintelligent Design” (a great title), is about a minute longer than the mad melee of “Book Burner”. It too begins in a lurching cadence laced with bursts of drum mania, with imperious pestilential chords ringing out, paving the way for a volcanic eruption of hyper-blasting and crazed riffing as the vocalist continues his expulsion of cauterizing shrieks.

The rhythms and pacing continue to change, but Svpremacist have already uncorked your adrenaline stores and they’re not about to dam them up again. The drumwork continues to be fantastically lunatic; the high whine and whir of the guitars shift on a dime between livid, high-speed thrashing, punk-like romping, the creation of macabre slithering melodies, and the discharge of deranged pulsating tonalities — with the performance ending in a cacophony of gruesome distorted voices.

Keep a sharp eye on Svpremacist, because their take on black thrash is fiendishly good, and more intricate and inventive than a lot of what you’ll find among the newer practitioners of the genre. Let’s hope they’ll return again early in the New Year with more nastiness for our ears.

Book Burner was recorded live by Yuri Idomsky at Polar Studio in Tel Aviv. It was mixed and mastered by Ofir Bachmutsky, who is also responsible for the intro and outro. The cover art was created by Daniel Sasson. You can pick it up right now on Bandcamp: