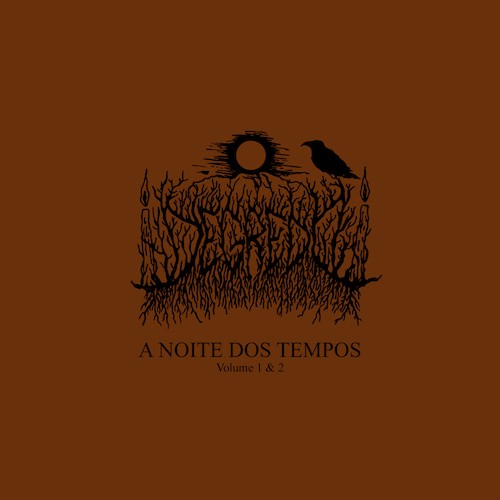 We’ve written before about the music of projects from within Portugal’s Aldebaran Circle — such bands as Ordem Satânica, Trono Além Morte, Occelenbriig, and Voëmmr. And to that list we now add the equally mysterious (and intensely unnerving) Degredo.

This entity’s newest release is a massive one — a double album named A Noite dos Tempos. Each album (Volumes 1 and 2) consists of two long tracks, for a combined run-time of an hour and 15 minutes. In advance of the release of A Noite dos Tempos on November 30th by Harvest of Death, today we premiere the first of the four tracks you’ll encounter as you enter Degredo‘s nightmare realm — “Parte Um“. 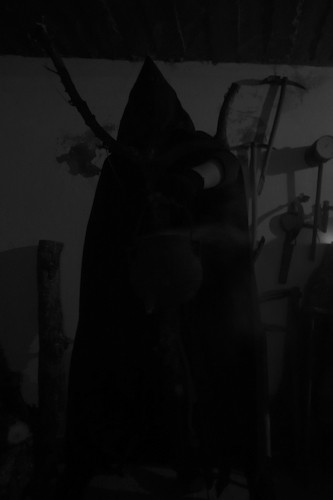 For reasons you’ll probably understand if you listen to Degredo‘s creations on this album, there’s a temptation to link them to black metal, but (as the label’s publicist so eloquently puts it) “the band dislocate and desiccate it to such an extent that only a ghostly aspect remains”. One might also mention drone and harsh noise in attempting to capture the sounds in genre terms, but I’ll try a different way of preparing you.

The nearly-19-minute experience of “Parte Um” is a harrowing collage of dense, distorted, and disturbing sensations. It becomes a gigantic, hellish hallucination — a summoning of primal fear, ancient horror, torturous pain, and terrifying transcendence.

Shrieking tones flicker from the maelstrom like heat lightning, along with weird shimmering and warbling melodies that seem both deranged and mystical, like the ringing of spectral chimes or the discordant ripple of piano keys mixed with the bubbling of tarry poison over open flames.

The assault on the senses over these nearly 19 minutes isn’t unchanging, but it’s certainly unrelenting. It’s a seeming paradox how something so mind-fracturing could also become hypnotic, but it does… at least it will for certain minds receptive to its hellish spells.

We are informed that in recording the album Degredo mostly used “acoustic and rural artifacts for precision and sound ambience”, and that Degredo‘s lyrics “are based on rural and ancestral essays, tales from the Serra Da Estrela Mountain and its surrounding areas, extracted from old sayings of their grandfathers and grand grandfathers”.

And with that, still inadequate, preparation, we leave you to the immediate experience of “Parte Um” — and if you allow the stream to continue, you can also hear “Parte Três”, which is the track that begins the second album. It’s similar in its strategy (the creation of supernatural audio terror) but different in the mix of its sonic weaponry.