I’m racing against the clock to finish the second part of today’s SHADES OF BLACK column, because I’m going to join about 65,000 other loud drunks watching a bunch of grown men engage in feats of athletic derring-do (and beating the crap out of each other) at Seattle’s Century Link Field. Fortunately, I have an hour more than I thought I would have to finish today’s two-parter because I forgot about that ridiculous thing I was supposed to do with my clock last night. Still, if this comes off as a bit hurried, now you know why.

I ended Part 1 of today’s column by writing about a band I hadn’t heard of (Andeis) before listening to a track off their new album that was included on a great Fallen Empire sampler released in mid-October. And now I’m beginning Part 2 in a similar way. 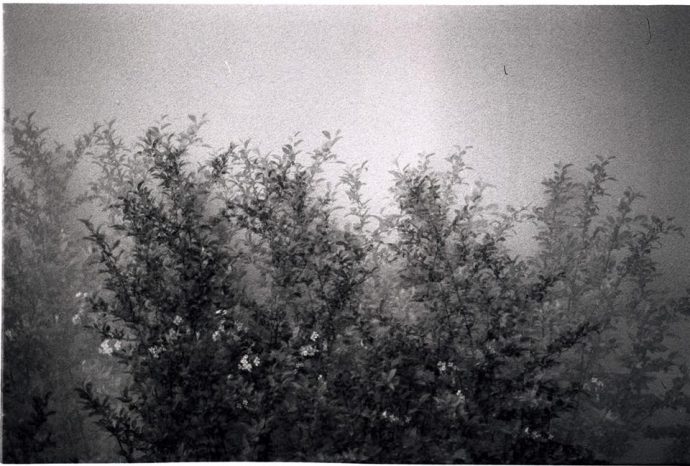 The second track on that sampler (“Stellar“) was drawn from the debut album of a band from Uppsala, Sweden, named Det eviga leendet. The album — Lenience — was released by Fallen Empire on October 20th. “Dragged out of the gloom into bright sunlight” is the description they give to their music.

We do begin in gloom as waves of bleak, perilous melody cascade across hyper-blasting drums and then more stately rhythm in the opener, “O”. Streamers of gleaming melody do emanate from these tension-torquing sounds, and the music eventually transforms into a glistening ambient shimmer.

If we’re being dragged out of gloom in the ensuing tracks, it’s often like being pulled behind a race car powered by a rocket. “Ingest” burns with fever and ferociousness, accented by the vocalist’s first appearance, whose tortured shrieks have an incinerating impact. But the music also transforms into a panoramic ambient soundscape that’s both beautiful and mystifying, and after that interlude, the song seems to soar in grandeur, finding the sunlight above the clouds.

This mixture of spasming pain, wretched abandonment, and sky-bound magnificence spreads across the four remaining tracks. The music is marked by unrelenting emotional intensity, finding lows of terrible grief and highs of heart-exploding wonder, often in the same track. It’s a wonderful album, deeply immersive from start to finish, but I’ll mention “Repent” as my personal favorite if you’re looking for a test case. 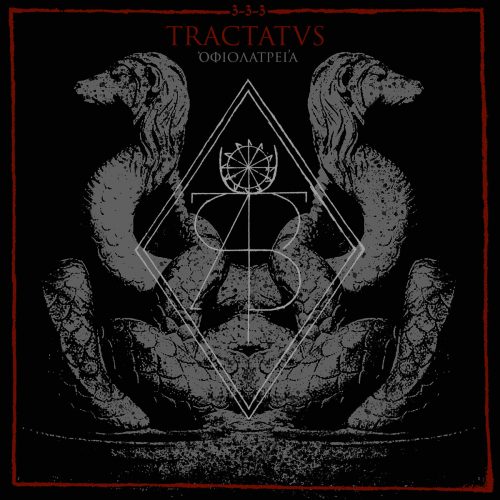 Ὀφιολατρεία is the debut album of an Athenian black metal band named Tractatus, who identify themselves as members of a circle whose differing approaches to the Dark Arts have been drawn together in the creation of musical “treatises.” Musically, they say, “it stands as a Treatise on the merging of the Essences of the Orient and the Occident, using Black Metal as its vessel.” The album was released on September 7th, and I finally got around to paying attention this weekend.

In both Parts of today’s column, I seem to have been especially drawn to music of great dramatic intensity and haunting (or ominous) grandeur, and those qualities are front-and-center in the music of Tractatus.  Whether rushing ahead in a wild hunt or falling into more stately rhythmic patterns, there’s an almost symphonic power and sweep to these sounds, yet there are also softer reveries — no happier, to be sure, but more wistful or wondering than devastating.

While each track stands very well on its own, the flow of this album both within songs and from one to the next is a big part of why I found it so immensely captivating. And in that sense, I suppose it’s like a symphony again, even though I don’t mean to say it’s “symphonic metal” in the sense most fans would understand that term (though you will hear synthesized strings and horns in the mesmerizing title track). It’s simply so well-constructed and elaborately textured, so ever-changing in the way it investigates the nuances of the human condition, in all its degrading failures, straining  aspirations, and fleeting achievements, that the album has the power to sweep you away into Tractatus‘ world and out of your own.

I’ll close by noting that all the performances here are first-rate, including the noticeable bass-work (which isn’t hidden by the glazing on the guitars or the mystical shimmer of the keyboards) and the utter savagery of the vocals. 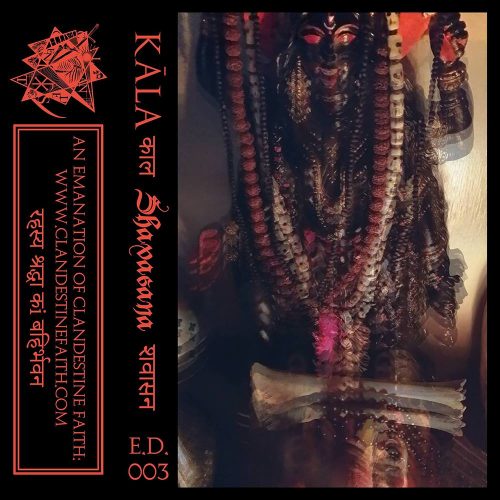 In August of this year I wrote about the first complete track to be publicly revealed from the debut demo, Shavasana, by a multinational collective who’ve chosen the name Kāla. That song, “Like Fires Of Virabhadra”, made a strong first impression, and now the entire demo is available for streaming, introduced by the band in these words:

O LORD, who rests beyond the stars, yet is the stars themselves. Upon your lotus feet, which are the color of jasper and reflect all of the darkness in ourselves, we adorn this hymn called Shavasana, a kirtan of reverse birth, knitted with the very fibers of our spirits. As it is, Shavasana: A Tale Of Everlasting Dissolution.

True to that introduction, the music is a reverential and mystical experience, and one that’s often exotic — as will become apparent from the melding of strings and the sound of many other more unusual instruments in the opening track (“Crossing The Virajā”), which feels uneasy, haunting, and hypnotic.

With that beguiling but dark introduction, “Like Fires Of Virabhadra” begins to work its own wonders, building in intensity as it goes. As I’ve written before, a haunting and mystical gloom also flows from the early moments of this song like scented smoke, as whispered words slip out over echoing notes (and that experience is re-cast at the end). The cadence remains stately as the drums come in (even when they catch fire), and as the layered guitars cast disturbing spells, shading the mood of the music in an even deeper and more miserable gloom. The vocals are harsh and intense, cracked with agony. The long, lingering reverberations of the chords and notes bespeak the eminence of death, and when the riffing becomes a fiery whirr, pain becomes manifest.

You feel as if you’ve entered a netherworld populated by lost souls at the end of  “…Virabhadra”. You feel as if you’ve entered a plague zone at the beginning of “Death By Kadga”, a place of misery in which you’re surrounded by the dying and the dead. The song flares to vicious life, becoming a monument of delirium and pain, but also becomes solemn when reverential spoken words appear, and there’s soulful grief in the beautiful extended solo that takes center stage in the song’s final minutes.

The song’s closing title track, like all that have preceded it, is a changing experience, even though it’s entirely instrumental, with a significant component of shimmering ambient sound in the mix. It’s almost dreamlike in its varying visions, as if we’ve been guided to see beyond the frames of our mortal existence and to become privy to intractable terrors and intangible magnificence.

Shavasana will be released by Clandestine Faith. I’m unsure of the release date. 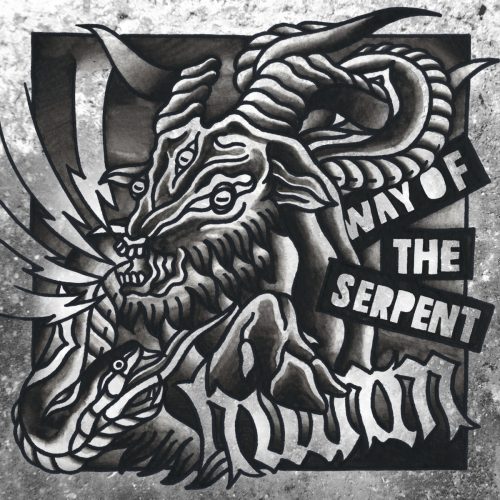 Three years have paced since I last wrote about Humm, the solo project of Fabio Gatto from the Piedmont region of Italy. Three years ago, the subject was Humm’s second album, Sanctuary, which was musically quite eclectic but constantly absorbing. The occasion today is a new Humm EP, Way of the Serpent, which was released on November 1.

I warned you at the outset that I was racing against the clock to finish this post, and I’m about to lose the race — so I’ll have to be brief. “Post-black metal” is the way Humm portrays the music. I would describe it as a combination of blowtorch black-metal shrieking, tremendously powerful pile-driving and bone-sawing riffs, and gut-punching drumwork, laced with a changing array of melodic accents — from pernicious skittering tones to fanfare blasts, from whirling frenetic dances to flights toward the clouds.

There’s considerable dynamism on display in these songs, and as in the case of Humm‘s last release, black metal is only one of many stylistic ingredients in the mix. As the last word, I’ll underscore that the recurrent grooves in this music are powerful enough to drive you right into the ground, or at least give you a very sore neck.

This last song in today’s two-part collection wasn’t love at first listen, but I think it surreptitiously hypnotized me because I went back to it later, and then returned again (and again).

“Na Imensidão do Vazio” does have a head-moving back-beat going on, as well as bursts of faster, metronomic snare-work, more punk-like scampering, and other rhythmic patterns besides. The guitars come across more often than not as a wash of bleak and harrowing sound, though strange melodic arpeggios and ominous reverberations also surface. The vocals, which aren’t way forward in the mix, are terrifyingly caustic.

I’ve lost count of how many times I’ve used the words “grandeur” and “majesty” (or derivations thereof) in this two-part post, but I would add that I’m inclined to use them again in describing this song.

“Na Imensidão do Vazio” is one of three tracks on a new 7″ EP from an obscure Portuguese black metal band named Nefastu, the title of which is Obscura Transcendência. It will be released on the last day of this wretched year by Purodium Rekords.