Two Sundays ago I had planned a giant edition of this column that included a trio of advance tracks and a trio of full albums, and then Kriegsmaschine‘s new surprise album diverted me. After writing about it I only had time to devote a second feature to the three advance tracks, and put off writing about those three full-lengths. I didn’t get to them last Sunday either, because a short vacation didn’t allow me the time I needed. And I’m not doing it this Sunday either.

This is the way things work in my defective brain. As you can see, this will be a two-part collection of new music (a very large one), but it’s all stuff I’ve discovered in the last two weeks. Those three albums that fell by the way-side two Sundays ago are still in the back of the room with their hands up, waiting to be noticed. I’ve promised myself I’m going to get to them, even if it means preparing a week-day edition of this thing. But for now, let’s get to the newer stuff.

As I hope you know by now, and certainly would know if you regularly hang around our putrid neighborhood, the Icelandic band Svartidauði will be releasing a new album named Revelations of the Red Sword via Ván Records on December 3rd, six years to the day after the advent of their debut album Flesh Cathedral. In mid-October the band provided a stream of a terrifying new song called “Burning Worlds of Excrement”, and now you can listen to a second one. 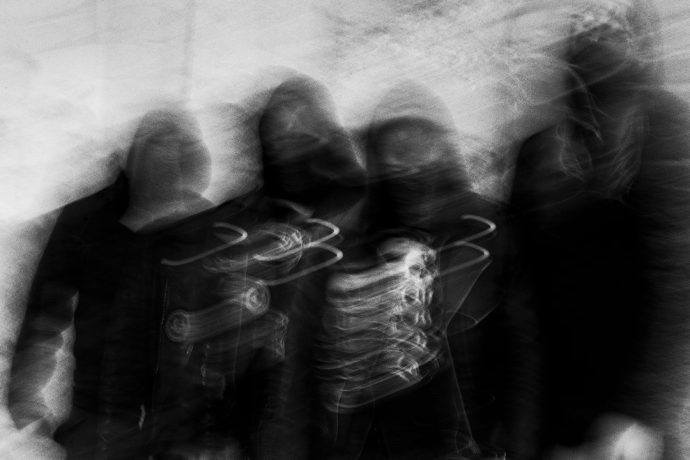 You will make up your own minds, but there is something about the long intro of “Wolves of A Red Sun” that’s majestic. Granted, it’s like the ominous grandeur of a rising sun that’s about to burn all the life off the planet. The burning does begin almost three minutes into the song in a flurry of blast-beats, a frenzy of roiling riffs laced with dissonant leads, and horrid echoing howls. As the music becomes more panoramic again, the drumming threatens to steal the show, and then the mercurial manipulations of the guitars steal it back.

The artwork in the video is by David Glomba and Karmazid. The album was produced by Stephen Lockhart at Studio Emissary in Reykjavík, Iceland. 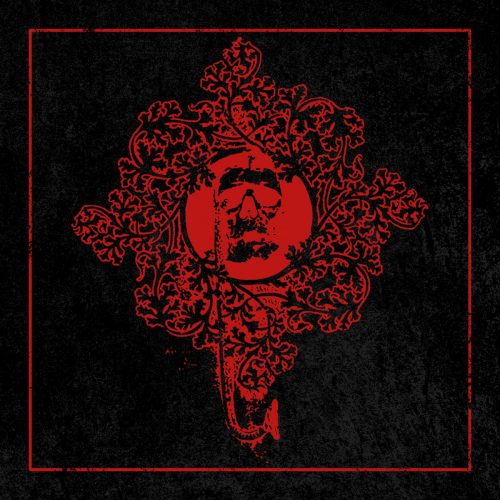 I discovered this next EP within the last week, but it was released in July of this year. It’s one of those better-late-than-never events.

Metal-Archives identifies Spain and Germany as the homelands of the band’s members, but otherwise they’re anonymous, at least for now (though I have it on good authority that the members are involved in other projects you’ll have heard of). The music on the Smoking Mirror is intense and dramatic, with an almost grand, symphonic sweep in the cascades of bleak and ominous melodies and the riveting, sky-bound cries of one of the vocalists (the other issues his proclamations in a haughty growl).

Darkness reigns supreme in these powerful, otherworldly sounds, which seem tailor-made for performance in a vast, pitch-black arena of spellbound fans, even if such an event would only ever occur in your imagination. Against the dense backdrop of infernal pageantry created by the threatening and even oppressive riffs, blaring chord fanfares, and the gripping work of the rhythm section, the lead guitarist surfaces with an array of eerie, serpentine leads and solos that moan, wail, and shriek, exploring shades of misery and desolation, and also creating sensations of arcane sorcery at work.

I’m puzzled as to why it took me five months to hear about this EP (unless someone told me and I stupidly failed to follow up), because it’s fantastic. 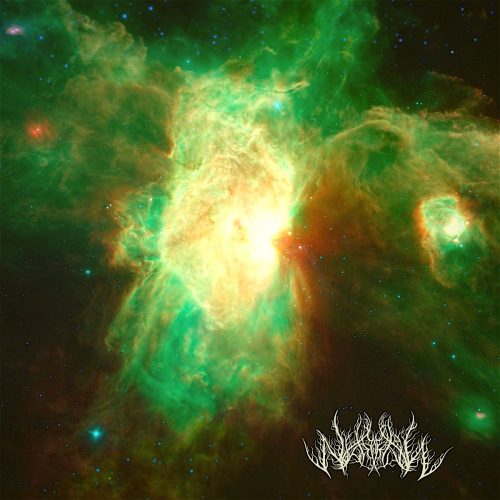 As many of you will recognize, I’ve written about Nightgrave a ton, in part because Nightgrave is now releasing albums at a fast clip, and in part because the music has consistently been very good and easy to recommend. The latest release of this one-man Indian band (the work of self-taught musician and vocalist Sushant Rawat) is an album called The Loom Of Void | The Curse Of Life, and it came out on October 24th.

This is a monumental work, in the sense that it’s nearly an hour long. That’s a lot of room, in which Nightgrave maneuvers far and wide, exploring a sweeping range of musical ideas. The limitless reach and astounding mysteries of the cosmos become manifest in ethereal, glinting and gleaming, melodies and in sweeping layers of guitar sound and bombastic percussive eruptions. There’s also intense turmoil to be found within the album, when obliterating drum avalanches provide the foundation for wretched howls of pain and anguished tremolo’d frenzies. At times, the intensity of the sound becomes wholly enveloping; at others, it’s so soft and fragile that it feels woven of tears.

The ebb and flow of the musical textures is well-calculated to keep you hanging on, never getting the feeling that you’re stuck in one place but instead waiting to hear what’s going to happen next. The music reaches out into the void, and also pushes inward, peeling back layers of personal pain through introspection and hallucination. As we’ve already discovered through previous releases, Nightgrave works these changes in part by interweaving an array of musical styles, black metal being only one of them.

What persists through all the changes is a kind of unifying theme in the atmospherics of the music. Though the moods do vary, encompassing isolation and abandonment, anxiety and anguish, fear and fight, they’re all dark. Look again at the album’s title. 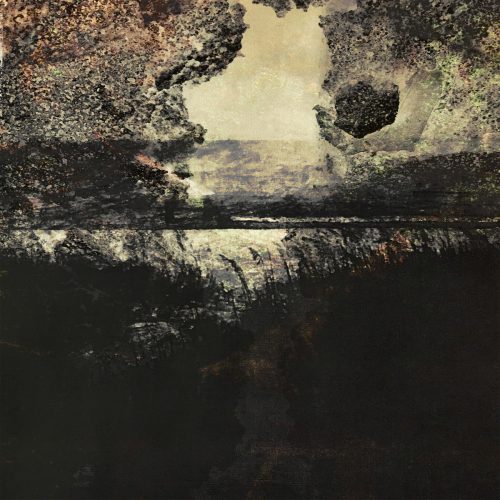 Nailbat Tapes is based in Portland, Oregon. On October 22nd they released what I think is the first record by a band named Dim Lords, Last World, Dead Universe. The Bandcamp page for the release includes this statement by Nailbat, which was enough to seduce me into listening:

This album came to Nailbat Tapes anonymously, the creators refusing to identify themselves. What they left was a screed formed out of twisted and barbed black metal, and this message:

“We are strangers . . . dim lords compared to what we once were. We transmit to those who have forgotten. Signals for those in thrall to infernal machinery. This world is the last in a dead universe. The silence of all space soon shall reign. We accomplished nothing. We endured no tests. Our pathetic excretus shall fall.”

Twisted and barbed — yes, the music is definitely that. It twists and turns, rocking and racing, spinning and soaring, bounding about and brawling with hammering chords, whirling and whirring in displays of demonic ecstasy, and opening up into manifestations of off-planet (or astral) wonder.

The Bandcamp stream opens with one of the most head-moving tracks (“A Dead Thing”), but Dim Lords have the controls over your autonomic nerves firmly in their grasp in every song. You’ll want to move, but the band do an effective job keeping you off-balance, too, interspersing their head-moving drives with miasmas of nightmarish sound (made even more frightening by the unhinged intensity of the vocalist’s shrieking expulsions), tirades of blood-lusting viciousness, and ominous, otherworldly visions.

In a nutshell, there’s a hell of a lot going on within these five songs, only some of which I’ve tried to capture. There’s a serious risk they will fly under the radar of most people, but that would be a shame, because Last World, Dead Universe is seriously good. Whoever Dim Lords are, I also seriously hope this won’t be their last release. (Last World… is now available digitally, and tapes will ship in mid-November, limited to 50 copies.) 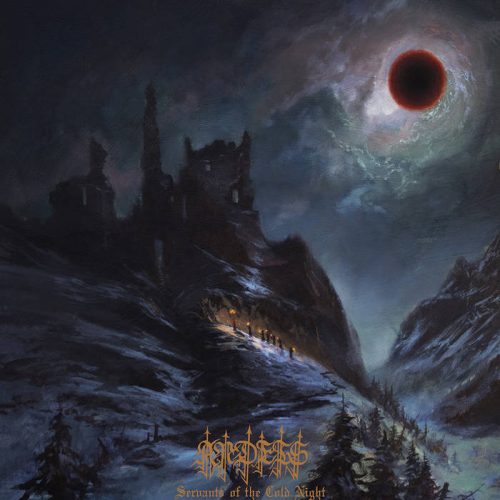 In mid-October I tried to give some extra exposure to a fantastic new sampler that had just been released by Fallen Empire Records. I was familiar with most of the bands (and knew them to be excellent), but the first two tracks on the sampler were from bands whose names I didn’t recognize. The first one, responsible for the sampler’s opening track, was Andeis (a multi-national group, I believe, but with most of the members from Sweden).

That first song (“Skalkos blindons nahts”) really struck a chord, and the debut album from which it was extracted (Servants of the Cold Night) came out on October 26. It turns out to be just as eye-opening and impressive.

The song on the sampler follows a spooky intro track and quickly throws the listener into a cruel, plague-stricken world made of jumping, head-nodding rhythms, ugly, blood-freezing snarls, and wild pulsations of melody that seem both cold and crazed. Over the course of the following five tracks, which range from blasting rampages to depressive, mid-paced romps and cyclones of outright lunacy, Andeis deepen the mood of harrowing heartlessness, the urgency of their riffing portraying forces that seem deranged, diseased, and implacably murderous. At times, the music becomes so nightmarishly vicious that it seems like a hallucination (“Wintrus hailagaizos aggwiþos” is a prime example).

Speaking of deranged, the drumming is frequently off-the-hook — remarkably fast and dexterous — and the vocals become so cauterizing and cacophonous that they’re capable of making you break out in a cold sweat all by themselves. Even when the band throw in brief, haunting, ambient interludes and a symphonic lament (“Skauns dauþus”) to provide breathers, there’s no real relief from the feelings of degradation and despair.