The first one is a live recording of Opeth performing the glorious “Ghost of Perdition” on May 11, 2017. It comes from the band’s new live album, Garden of the Titans: Live at Red Rocks Amphitheatre, which was released on November 2nd by Moderbolaget Records and Nuclear Blast on DVD, Blu-Ray, and vinyl formats.

When I published the original version of this post about an hour ago, I left out the next video for The Monolith Deathcult‘s “Dawn of the Planet of the Ashes“. I can’t explain why. It was on my typewritten list, and then simply disappeared. Of course, it’s most probably my own fuck-up rather than some form of black magic at work, but I’m not willing to completely rule out the latter possibility.

I haven’t figured out the conception behind the video yet. Visually, we’re either on a space station or we’re playing a video game set on a space station. Lyrically, we’re dealing with the Nakam Group, a band of roughly 60 Jewish partisans and survivors of the Nazi death camps who entered Germany after the end of World War II in order to seek vengeance by, among other plans, poisoning the water supplies of Munich, Berlin, Weimar, Nuremberg and Hamburg, with the intent of killing as many Germans as the lives of Jews lost in the Holocaust — roughly 6 million. As recounted here, that plan was foiled, but the Nakam Group did succeed in poisoning more than 2,000 German POWs, 300 to 400 of whom died.

The connection between the video and the lyrical subject matter is what’s eluding me. The music, however, hasn’t eluded me. It has instead stomped on my neck and blasted my brain, sending the fragments off into the cosmos. (The song comes from the band’s new album, V2 – Vergelding, which will be out on November 30 through Human Detonator Records.

We’ve already reviewed the new Arsis album, Visitant (also released on November 2nd), and you can read what Andy had to say about it here. He identified the song featured in the new video (“Fathom“), along with “A Pulse Keeping Time With The Dark”, as examples of “the moodier, chunkier heaviness” displayed on the album, “a darker, and more direct, take on their signature sound, one that’s both groovier and gloomier, but still fret-blazingly bombastic”. 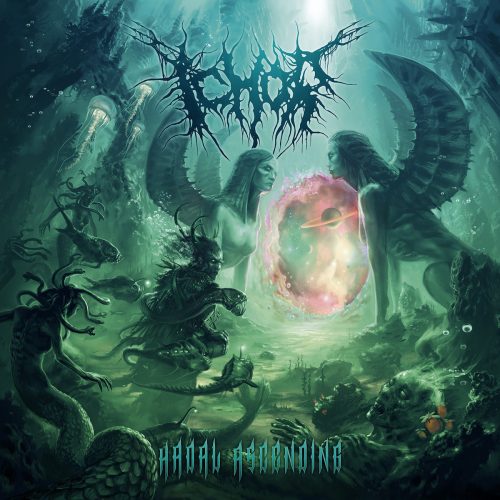 Hadal Ascending is the fourth album by the German death metal band Ichor, whose thematic focus is “the horrors of the depths and the end of all existence”. It will be released on December 7th by Unholy Conspiracy Deathwork and WOOAAARGH and features a cover painting by Pär Olofsson. It was recorded, mixed, and mastered in Hertz Studio in Poland, which is fitting because the music in the next video reminds me of Behemoth, though not exclusively so.

The vocalist, Eric, has a mighty roar and a fearsome mien, and the music is fearsomely powerful, too. Enjoy this well-made video of the band performing “Tales From the Depths“.

“Barricades” is the second single to be released from the forthcoming third album, Autumn Kings, by the German death-doom band Décembre Noir. Lifeforce Records will release it on November 9th and recommends it for fans of October Tide, Katatonia, Paradise Lost, and My Dying Bride — and you’ll understand why when you listen to “Barricades” as you watch the video. As autumn deepens and winter approaches, the sounds are fitting.

And here, coincidentally, we have the third German band in a row to close out this collection of new videos.

Köhlbrand are a death/crust band from Hamburg, and on November 9th they’ll release their self-titled, eight-track, 22-minute, debut EP through Slaughter Race Records. They describe it as a “journey through beer-induced riffs with glorifyingly silly lyrics”.

Their new video is for a track named “Curse of the Sex Wizards“, which is a high-energy romp and a hell of a lot of fun to listen to. The video tells a story, which begins in a bar that isn’t as conventional as it seems, and ends in blood. Or I should say, blood and boobs.

If you’d rather not see shapely bare breasts, even fleetingly, you can instead watch the censored version on YouTube, which I’ve helpfully included as well.

Köhlbrand – Curse of the Sex Wizards (OFFICIAL VIDEO/uncensored version) from Köhlbrand on Vimeo.