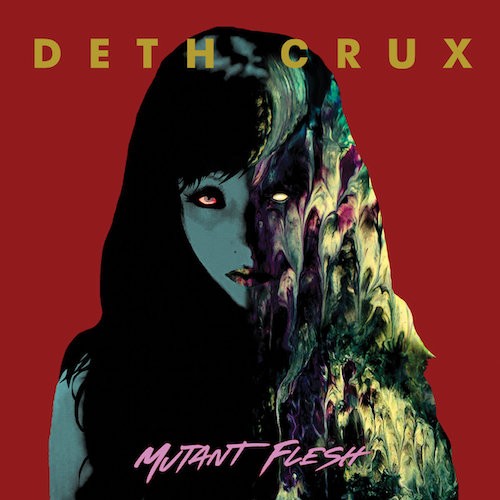 Three years on from their Pears of Anguish demo tape, the L.A.-based deathrock shape-shifters Deth Crux are returning with their debut album, Mutant Flesh, set for imminent release on December 7th through the collaboration of Sentient Ruin Laboratories (U.S.) and the Italian labels Legion of the Dead and Aural Music. “Chrome Lips” is the name of the ravishing new album track that we’re bringing you today.

While we normally resist parroting what labels and PR agents write about the releases they’re promoting, sometimes the verbiage hits the nail on the head so squarely that it’s difficult to resist, and that’s the case here. There is indeed a “chameleon-like approach to post-punk” and gothic rock in the music of Deth Crux, “where beauty and ugliness, seduction and perversion, dream and nightmare interchange constantly and construct the foundation of their sound”. 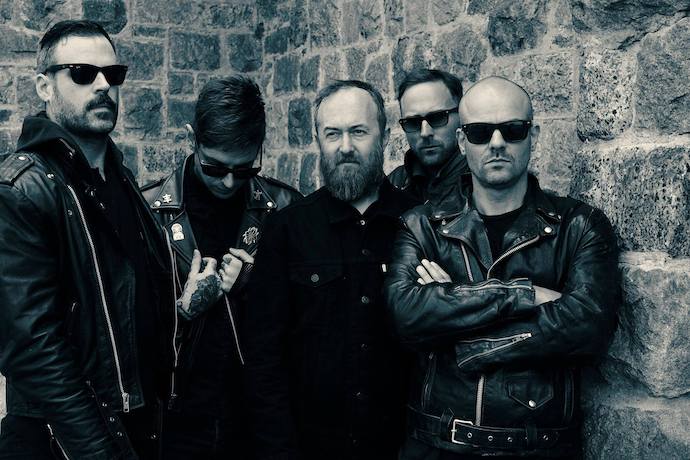 Musical influences that include the likes of Bauhaus, Sisters of Mercy, Fields of the Nephilim, and Christian Death play out against an L.A.-inspired “backdrop of urban chaos and decadence, glamour, sex, perversion, seduction, death, and body horror”,  then stirred into “a blood-soaked and hallucinating rock and roll horror story about deviated and once-human beings aimlessly and erratically populating and roaming a damned neon hellscape”.

Evocative words, which is why we’ve quoted them, but we have a few of our own about “Chrome Lips”.

The song is irresistibly head-moving, thanks to the drummer’s skull-hammering back-beats and slashing, gleaming chords. When the drums tumble, the guitars radiate a searing shine, vibrating in a sweaty sheen of desolating fever. The song is also laced with spiraling leads and long peals of glistening melody. The singing holds its own seductive, Jim Morrison-like allure, conveying gothic gloom, and also rising in a kind of wrenching wail.

There is indeed a kind of perverse and damned romanticism at work in the song, which is otherworldly and haunting, and also earthy and primal. There’s also a perilous edge to the music, a seductiveness that pulses with a warning beacon — the kind of pleasure that involves pain.

The music of Deth Crux may not qualify as extreme metal, but the line-up includes members of Buried at Sea and Lightning Swords of Death, and it was recorded with Sanford Parker (Leviathan, Wovenhand, Nachtmystium, Voivod, etc.). Mutant Flesh will be released on tape and vinyl in the US by Sentient Ruin, on vinyl in the EU by Legion of the Dead (the goth subsidiary of Italian crust punk label Agipunk), and on CD by Aural Music.

Enjoy “Chrome Lips” below, along with the previously released tracks “Spectral Other” and “Black Abominable Lust”.