Despite how stultifyingly stressful this week has been for the most part, yesterday turned out to be a pretty good day all in all, as things at work took a major turn towards the positive, while the evening found me taking a trip over to Birmingham to catch three (out of four) great bands of the “technical” persuasion. 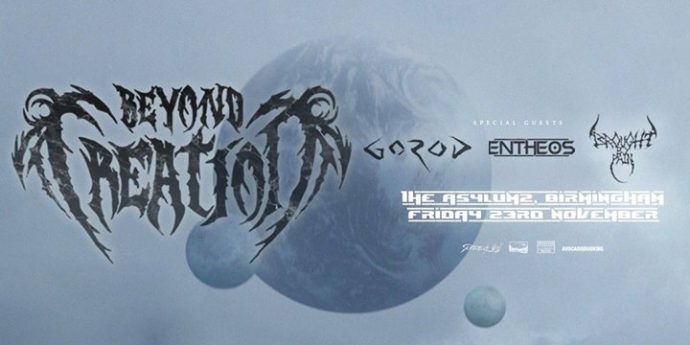 Arriving just in time to catch American Prog/Tech quartet Entheos (apologies to openers Brought By Pain, who we missed due to general traffic/lateness issues) my companion and I were treated to a solid set of complex yet punchy, electronica-injected, material drawn from the band’s two albums that left a mostly positive impression, despite the band’s live sound occasionally being a little on the thin side.

Granted, it still feels like the group’s song-writing isn’t as smooth as it could be (some of the more abrupt changes in structure/direction stood out as a little awkward live), but their energy and technicality (not to mention their atmosphere-enhancing light show) were both top-notch.

It’s been a long time since I’ve seen fearsome French five-piece Gorod live, and even though they were stunningly good back then, tonight’s performance proved that they’ve somehow gotten even better in the intervening years.

It helps, of course, that they’re out touring in support of an absolutely fantastic new album (the title-track to which you can see/hear below), but there’s more to it than that, as the band perform with a level of precision, spontaneity, and charisma (particularly vocalist Julien Deyres, who comes across between songs like an engagingly confident comedian moonlighting as a Metal vocalist) that speaks to not only their collective experience but also the innate connection between the members, who play off and respond to one another like a well-oiled machine.

It also helps that the band’s material is absolutely stellar, from scintillating opener “Bekhten’s Curse”, through the classic “Here Die Your Gods”, to the closing strains of “Disavow Your God”, and that they kick out every one of their hook-heavy, riff-tastic jams with such infectious zeal and enthusiasm that it’s impossible not to get swept up in their set.

An absolutely brilliant performance, make no mistake about it.

Now despite my somewhat lukewarm response to the band’s new album, I was very much looking forward to seeing Beyond Creation again this evening, as I’ve enjoyed every single one of the band’s shows – whether they’ve been on big stages or in tiny venues – which I’ve attended over the years.

Unfortunately it turned out that the Quebecois quartet would be performing the entirety of Algorythm for us this evening, which meant that the exact same flaws which I pointed out in my review (the meandering song intros, the tendency towards navel-gazing repetition, etc.) would end up being magnified over the course of the evening, although this didn’t seem to bother the majority of the crowd that much, who were happy to eat up whatever the band put out.

Still, I’d rather focus on the positive than the negative, and several of the new tracks (“Surface’s Echoes”, “Algorythm”, and especially “The Afterlife”) actually sounded even better live than they do on record.

The final phase of the band’s set is where things really picked up, however, as they followed up “The Afterlife” with a pseudo-encore of “Earthborn Evolution”, “Omnipresent Perception”, and “Fundamental Process” – three of their signature songs – that ended the evening with a reminder of just how good Beyond Creation can be when all the stars are rightly aligned.

Still, I have to say, it was Gorod who really stole the show this evening, and if you get the chance to see them anytime soon I highly recommend that you do so!