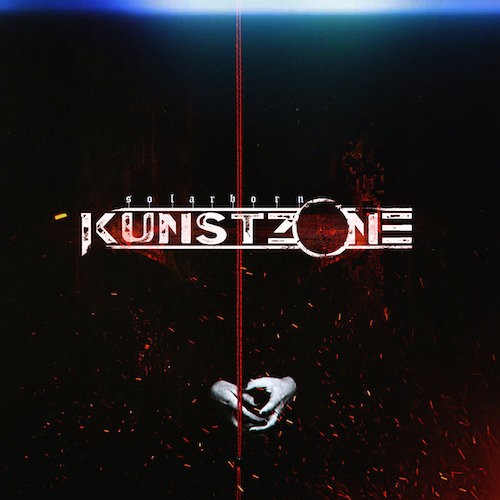 (In this post DGR reviews the latest album by one of his favorite projects, the two-headed industrial-death monster known as Kunstzone.)

I’ve followed Kunstzone for a long time, having covered them at this site since their debut release — an interest spawned by my having enjoyed its two component musicians’ prior projects: Khaozone and the various messes musician Alex Rise involves himself in, at the time his Tyrant Of Death project.

Half of the fun of following Kunstzone has been witnessing the tug-of-war for the group’s sound on each one of its releases, with one side slowly gaining a victory over the other. If one were to pick apart the industrial death metal group’s sound, one would note the slow favoring of more and more overall extremity on each one of the band’s releases, with the group’s 2017 single Creatures Of Sinew And Lard serving as a bellweather for what the group’s newest album Solarborn was going to subject us all to.

Upon further dissecting the group’s sound one might note two pretty clear influences: that of Anaal Nathrakh and their branch of increasingly electronic extremity and that of Fear Factory and their relentlessly precise industrial hammerings with big echoing choruses meant to soar above the machine-work below.

One might also notice how each disc has split, with the group’s first album Eschaton Discipline going for a pretty evenly distributed 60/40 approach in favor of Nathrakh and an increase in that influence on The Art Of Making The Earth Uninhabitable, at about 70/30. Solarborn only increases that division, with the ratio now lying somewhere in the favor of 80/20; the death metal hammering precision and all its non-stop rhythmic impulses are still there, but Solarborn is probably the group’s most chaos-focused release to date.

We probably should’ve taken it as a signal when they credited themselves with something resembling real names – Andy Benz and Alex Rise, respectively — rather than the thin joking Star Trek-themed layer that has been something of a band hallmark. That might have been a clue that their goal for us as listeners would be to leave us sonically immolated  by track three.

Yes, Solarborn is Kunstzone’s most ferocious work to date in a discography that has slowly embraced more of the band’s loud and chaotic side since its inception. Solarborn is one of those albums that from moment one basically has its foot planted on the accelerator with very few stops in between. It swings back and forth from an extremely-fast take on industrial death and songs that are just monstrous groovers, with the sheer speed-and-acceleration batches of songs winning out in the long run.

It is immediate in Solarborn’s second song “The Harrowing Dawn” just how evident the tug of war is for Kunstzone, genre-wise, as it shifts immediately into a blast-fueled, white-knuckled adrenaline rush, with the lyrics delivered just as rapidly and in a suitably high scream. It is in moments like “The Harrowing Dawn’s” chorus where Kunstzone draw the Fear Factory comparisons, as they shift suddenly into a powerful, echoing-across=the-room style of sung chorus before just as quickly snapping back into the act of melting the listener’s face off.

This is a comparison that becomes all the more blatant during “Blank Soul Imprint”, whose futuristic terminator-grinding may satiate quite a few people who’ve missed the machine-like precision that defined much of the industrial death scene. That continues on in “What The Mouth Conceals”, which is basically “The Harrowing Dawn” but with the glory-chorus art surgically removed, leaving behind a snarling monster of a song that can move just as quickly.

Funnily enough, though, it’s because Solarborn’s chosen tempo is as close to melting the listener as the band could get, that the slower grooving songs actually stick out a little more, and so you wind up with five or six really fast tracks that are near-instant highlights and then a song like “Endpoint Zero”, whose percussive impact and loud pinging noise during the guitar-chugging chorus makes it one of the most headbang-heavy songs on the disc. “Endpoint Zero” is book-ended by two songs that are in the lightspeed territory tempo-wise, so its sort of brain-dead grooving makes for a welcome change before we’re flung back into the Solarborn maelstrom.

In between the sheer amount of vitriol being discharged the listener’s way and the constant back-and-forth dynamics there is occasional room for experimentation, past the album’s intro and outro bits of ambience. A little bit past the halfway mark of Kunstzone’s latest noise-hurricane you’ll find “First Snuff Generation”, which could best be described as an industrial dirge, electronics seething at the edge of a slowly moving guitar line and pulsating low end.

In comparison to the rest of Solarborn, including the on-off hyperspeed switch that is the first collection of tracks on the album up to this point, “First Snuff Generation” crawls at a tortured pace for its five minutes. It is the only point on the album when the band give the listener a chance to breathe, because almost immediately after it wraps up they scorch all evidence of existence off of this mortal plain with the song “Downfocus”, which happens to fall very much in line with the songs early on in Solarborn such as “What The Mouth Conceals” and “Infinite Hell Panorama”. The latter track, whose title is probably the most fitting for the amount of shrieking and pyrotechnic blastwork involved, is both a monstrous visual to imagine and almost non-stop in its pacing, which fits with the near-breathless first-half of Solarborn as a whole.

By The Art Of Making The Earth Unihabitable, Kunstzone had pretty much mastered the art of weaponizing sound and volume, so the fact that Solarborn is similarly filled with booming low end and everything else cranked up to as high as it can go is no shock. It is an intentionally abrasive album, meant to distort and at times to sound like a war with white-noise. It is a futuristic branch of the extreme sensibilities reserved for this class of metal, as if Solarborn were a transmission filtered through a multitude of computers rather than the up-front and in your face explosiveness that has become a genre mainstay.

It’s in that sound that Kunstzone’s two component musicians’ own tastes for industrialized hostility rings the clearest, and you really recognize the parts of their previous projects and how they mesh into their current form. The titular “Solarborn” especially, feels like a Dark Space-era Tyrant Of Death track clashing head on with the Khaozone work that had been put out previously.

Solarborn is an impressive work from a project that seems to still be hidden amongst the sinister reaches of space. Kunstzone is a project whose name has taken on a sarcastic sheen, a sneering take on an ‘art zone’ but whose music is more inclined to be calculated chaos designed to inflict violence upon the listener. It is a project that makes art out of extremity with a healthy dose of the digital age thrown in, so that it isn’t so much fiery demons from hell in this latest earth-scorcher as it is ones that explode out of your computer screen, leaving behind nothing in their wake.

Of the three albums so far, Solarborn is the most consistently heavy and dynamic disc that Kunstzone have put out to date and one that shows that a ton of promise is still left in the band’s sound.