(Andy Synn wrote this review of the new album by the Trondheim black metal band Whoredom Rife, which was released by Terratur Possessions on November 30th.)

While the prevailing narrative may be that 2018 has been “a Death Metal year” (and not without good reason), to dismiss the plethora of thrilling, chilling, and blistering Black Metal albums released over the last twelve months would be a huge mistake.

I’ll be saying more about these next week, when I’ll be rounding up the multitude of meaty metallic morsels which I’ve had the chance to sink my teeth into this year (and highlighting some of my favourites) but, in the meantime, I thought I might try and bring a little bit of extra attention to Nid: Hymner av hat, the second album by Norwegian duo Whoredom Rife, which was released last week. 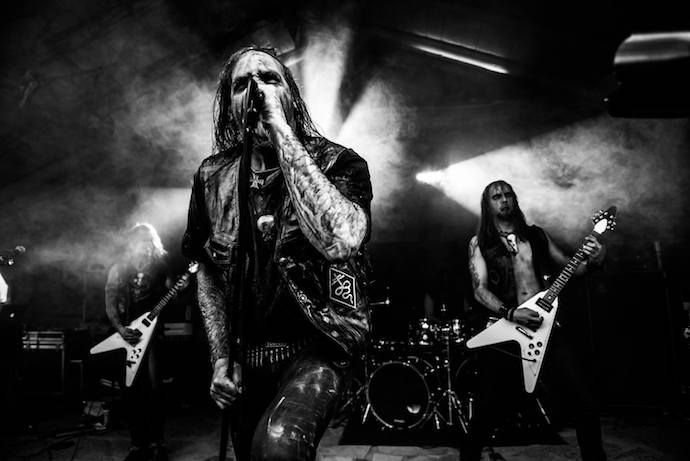 Possessing a searing melodic menace reminiscent of Dark Fortress and a strident grit that recalls early Watain, along with a sense of blasting belligerence not a million miles away from latter-day Enthroned, the seven songs which makes up this album will undoubtedly appeal to anyone who considers themselves a committed connoisseur of the blackened arts, while even the most wide-eyed neophyte should find something here to capture their attention, such is the band/duo’s clear grasp of the most vital and fundamental elements of Black Metal.

But although the above comparisons inevitably mean that Nid possesses a certain inherent familiarity, there’s also an undeniable rawness and intensity to the material (especially the vocals) which precludes any accusations of piracy or plagiarism and runs rough-shod over any suggestion that this is anything less than another vital, visceral entry in the ever-expanding annals of the genre.

Tracks like scything opener “Summoning the Ravens” and its similarly scorching companion “Verdi oeydest”, for example, may have their roots in the classic sounds of Dissection,Immortal, etc, but are notably grimmer and more dissonant than their progenitors ever were, while even the more melodic and atmospheric “Where The Shadows Dwell” pursues an even darker and more discordant path than its sombre acoustic opening might suggest, constantly seeking to swamp and suffocate the listener in waves of sinister, Shining-esque gloom.

Bristling with razor-sharp hooks and practically pulsating with power, the album’s fourth track, the spellbinding “Hyllest”, is undoubtedly its high point, showcasing every aspect of the band operating at peak performance, from the harrowing, hellhound snarl of vocalist K. R., to the impressively multi-layered and multi-faceted instrumentation provided by guitarist/bassist/drummer V. Einride, all of which is further enhanced by the growing sense of impending doom and encroaching darkness which hangs over the track like a tattered burial shroud. 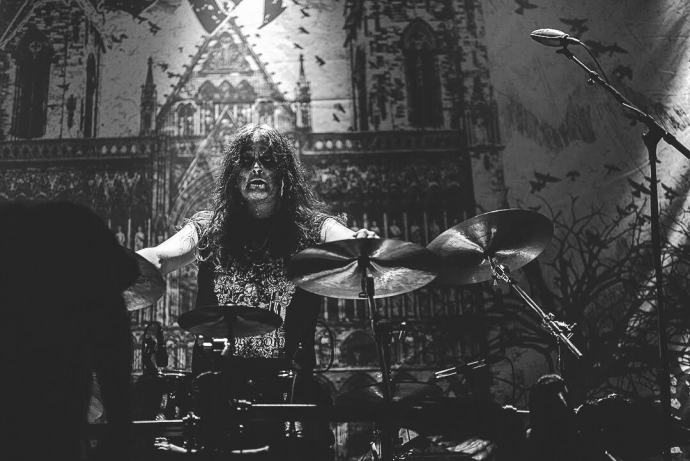 Of course this doesn’t mean that the subsequent tracks are in any way lacking in venom or vitriol, as “Crown of Deceit” immediately distinguishes itself as one of the most unrelentingly violent songs on the entire album, balancing the more eclectic and esoteric dynamic of its predecessor with an equal and opposite dose of pure, unmitigated fury, and “New Hate Dawns” errs more towards the more darkly melodic end of the spectrum while also maintaining a respectable undercurrent of palpable rage and anguish.

It’s titanic closer “Ceremonial Incantation”, however, which comes closest to matching the devilish delights of “Hyllest”, as the band indulge themselves in over ten minutes of writhing, coiling riffs and hypnotic percussion, punctuated here and there with molten eruptions of malevolent groove and bombastic blastery, that somehow seems to fly past in the blink of an eye.

Make no mistake about it, although Whoredom Rife may not really bring anything extravagantly new to the table on this album, ultimately they play the game so well that they simply don’t need to!