Majestic Downfall‘s new album, Waters Of Fate, will be released on December 7th by Solitude Productions and Weird Truth Productions in Europe and Asia, and by Chaos Records in the Americas. It consists of five tracks and 52 minutes of music, and the European/Asian version of the album includes one further bonus track for a total playing time of over an hour.

You can lose yourself in this album very easily. The four long songs of doom/death and one brief interlude that make up the Americas version of the record are staggeringly intense and atmospherically immersive, and the melodies are powerfully alluring, but the music will prove especially appealing to listeners with a taste for crushing heaviness and soul-splintering sorrow.

As you’re about to hear — because the album will become available for streaming in full today — there is tear-stained beauty to be found here, and passages of epic yet bleak grandeur, but this is an album that will dash your fondest hopes and smother your budding joys in their crib.

When I heard the album’s first single, “Veins“, which is the opening track, I thought of it as an anthem for the trying times in which we live. Slow tears weep from bruised eyes in this music, and it also channels mutilating pain and a level of desolation that seems unsurvivable. It howls in agony, roars in furious defiance, and glimmers with faint and forlorn yearnings, mixing ethereal reverberations, bludgeoning chords, drum blows you can feel in your spine and that go off like the crack of gunfire, and harsh vocals that seem to be a hybrid of agony and fury. The song becomes feverish and fierce, demands retribution, and reveals the magnificence of imagined but hollow triumph.

The sequence near the end is especially moving, with a glorious, soaring guitar solo followed by a head-moving bass in the spotlight, and then by one last heart-pounding surge of power before the soft, chiming notes of grief return, accompanied by cataclysmic percussive blows. There’s enough emotional intensity in the track to power a large city. Once you’ve heard it, “Veins” will stay with you.

Waters of Fate ends in a way that’s also transcendent, but you don’t reach that point until five minutes are left of the 13 1/2 minutes of “Collapsed Pitch Black“. When the time comes, the pacing increases, the drumming becomes a series of earthquakes, and the riffing turns more delirious, and more exalted. A flurry of blasting drums and furious riffing, accented by bursts of soaring melody and capped by a sorcerous guitar solo, push the song to heights of desolate splendor, and its closing melody is again one that stays with you.

But before you reach that finale, the song earns its title, suffusing the senses with anguish and gloom, with deep, moaning leads and bone-breaking drum work, with tortured vocals and mountainous rhythms. When tension builds, as it often does in these tracks, it’s a grim experience, alleviated only by the reverberation of haunting notes and solemn snare patterns.

The other two long tracks on the album, “Waters of Fate” and “Contagious Symmetry“, present contrasts, two slightly different sides of this album’s death’s head coin.

The opening notes of the former are a clarion call to the wretched faithful — followed by massive juggernaut chugging geared toward getting your head driving like a piston. After downshifting into greater gloom, the music builds a sense of anxiety, a mounting fever, and then the drums become a tumult beneath long, dismal chord reverberations, and the percussive intensity is then transmitted to all the instruments. The band ratchet the mood of tension and despair, yet break the mood with light, rising notes that sparkle with life, forming a kind of prelude to a guitar melody that resonates with a feeling of longing, veined with loss.

On the other hand, “Contagious Symmetry” is slow, aching, and ominous. It builds an oppressive atmosphere of inner turmoil, the vocals gradually boiling over in agony, but the song seems unrelentingly dismal and dolorous. The ghostly guitar reverberations that open the song and later reappear give the music a spectral and even hypnotic dimension, but there’s no escaping the grief that so completely inhabits the music.

For those who choose to acquire the version of the album that includes the bonus track, the name of which (“Waters of Faith“) is a kind of play-on-words of the album title, you’ll be in for a disturbing surprise. It’s like nothing else on the album, an experimental-sounding concoction that’s hallucinatory and kaleidoscopic.

The crushing weight that’s a constant companion in the rest of the album is gone, replaced by the persistent crackle of static (almost like rainfall) and the occasional appearance of detonations. There are slow, somber, mystically beautiful keyboard melodies, as well as tortured tones that resemble a sax, warbling organ notes, funereal strings, the fanfare of horns, and the ripple of piano keys. Gone also are the growls, and in their place, in and around the music’s strange and often disorienting sounds, are equally strange and disturbing voices.

The remaining days in the year tick down, not many left now, but great albums are still being released, and you can add Waters of Fate to the list of December stunners, a doom monolith that you can drown in. 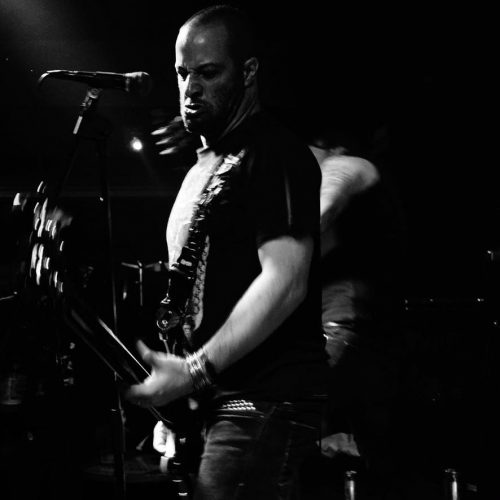 Credits: Bass, rhythm guitar, and vocals were performed by Majestic Downfall’s mastermind, Jacobo Cordova. He was joined by Alfonso Sanchez (drums), Dah (lead guitar), and Aly (guitar solos). The cover art was created by Ars Moriendee. The album was mastered by Tore Stjerna at Necromorbus Studio in Stockholm.