(Today our premiere is introduced by Andy Synn, and features a new video for a single from the new album by Endolith. The album will be released on January 18th by Rob Mules Records. The single is available digitally today.)

It’s been well-documented that Voyager, the astonishingly good debut by Norwegian Prog-Metallers Endolith, is one of my favourite albums of the last ten years, and one which I’m constantly trying to get more people to listen to… hint, hint.

However I’m just as hopeful that the band’s upcoming second record, the blood-pumping, brain-teasing, Chicxulub The Fossil Record, is going to become one of your favourites too once it finally hits the streets (and the internet) on the 18thof January.

Having heard the entire album already I can offer a few minor spoilers to help get your juices flowing, such as letting you know that it’s a warmer, more organic sounding affair than its predecessor, and while it’s also more melodic in many ways, it’s still just as groovesomely heavy and, arguably, a few shades darker too.

The band released the first taste of Chicxulub (whose title refers to the impact crater of the same name in Mexico where an asteroid or comet hit the earth precipitating an extinction-level event that wiped out the dinosaurs) back in July with the video/single “Rex”, and now we’re lucky enough to be able to present you a second helping of metallic magic in the shape of the new video by Steffen Normark for “Ichthys”. 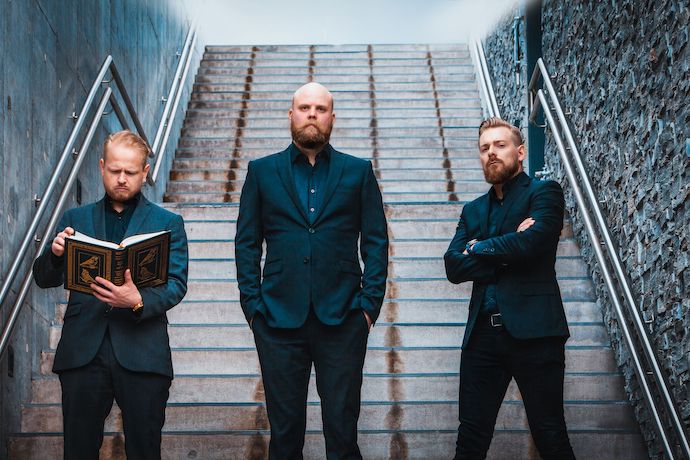 Showcasing a thrashier, more frenetic delivery than established fans might be expecting, “Ichthys” immediately demonstrates how much the band’s sound has evolved in just two short years, trading in some (but not all) of the mechanical, Meshuggah-like precision of their debut in favour of a much more lithe and limber approach which owes just as much to Strapping Young Lad as it does to Devin’s more recent solo work.

And while the vocals are just as potent as ever – switching between a guttural, yet surprisingly eloquent, growl and a dramatic, emotive croon as the song requires – this time around the diverse, down-tuned guitars and pummelling percussive patterns are accompanied not only by an electrifying electronic undercurrent but also by the presence of an honest-to-goodness eighteen-strong string ensemble courtesy of The Arctic Philharmonic Chamber Orchestra.

These scintillating symphonic embellishments add a dose of naked grandeur to the track that’s a perfect counterpoint to its humongous metallic grooves and captivating melodic hooks, so if you’re a fan of any of the artists mentioned above, or just a fan of ambitiously arranged and powerfully progressive extremity, then make sure you check out “Ichthys” below asap and mark down January the 18th in your calendars asap!

One Response to “AN NCS VIDEO PREMIERE: ENDOLITH — “ICHTHYS””