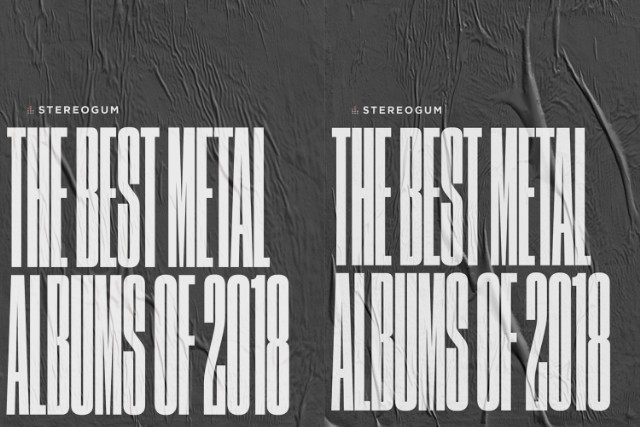 Stereogum easily qualifies as one of the “big platform” web sites whose year-end lists of metal we perennially include in our LISTMANIA series. Of course, the site appeals to an audience of music fans much larger than devoted metalheads (they have, for example, a list of the “50 Best Albums of 2018“, across many musical genres), but its staff includes a talented and tasteful group of metal writers who among other things are responsible for the site’s monthly “The Black Market” column, which has been a great source of discovery for extreme music for six years running now.

It follows that Stereogum‘s annual metal list is one I especially look forward to seeing every year, and the 2018 edition appeared yesterday — though it’s a shorter list than I recall from past years.

As Aaron Lariviere wrote at one point in the column that rolls out this Top 10 list, “There will be no Thou. No Yob, Panopticon, Horrendous, Slugdge, At The Gates, Dödsrit, Deafheaven, High On Fire, Sleep, none of it. Not even Deicide.” Instead, he, Ian Chainey, and Wyatt Marshall “made a collective decision to eschew grand narratives and editorial coherence, and instead give you our unvarnished favorites — the things we loved most (or hated least).”

There’s a lot of interesting writing to be found in this year’s annual summing-up by that trio, which you can find here, but rather than attempt to summarize all the topics they address, including the the reasons for their selections, I’m just going to present the list — and of course invite our readers to Comment at will.

(I will say that I fuckin’ loved their No. 1 pick. Don’t know if it would have been my own No. 1 if I could be bothered to make a list, but just seeing it here put a big smile on my face, as did many of the others.)