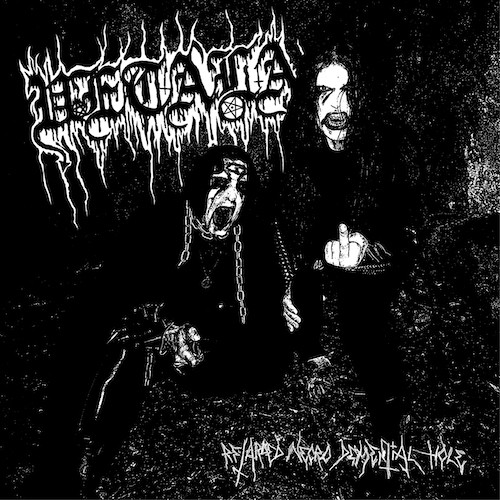 “This album REALLY isn’t for you!” So states the PR material for the new album on the Harvest of Death label by the duo of unrepentant Portuguese extremists in Vetala. The wordsmith in question wasn’t referring to me in particular (at least I don’t think so), but to some broad swath of “critics” who might take offense at an album named Retarded Necro Demential Hole and whose utter depravity could be perceived as a way of taking a shit on good taste and “any and all conceptions of ‘black metal'”.

Of course, I took that as a dare. I mean, most of you know the range of extreme metal that typically forms my own bread and rancid butter. How could it possibly be too transgressive or disgusting for me to swallow? 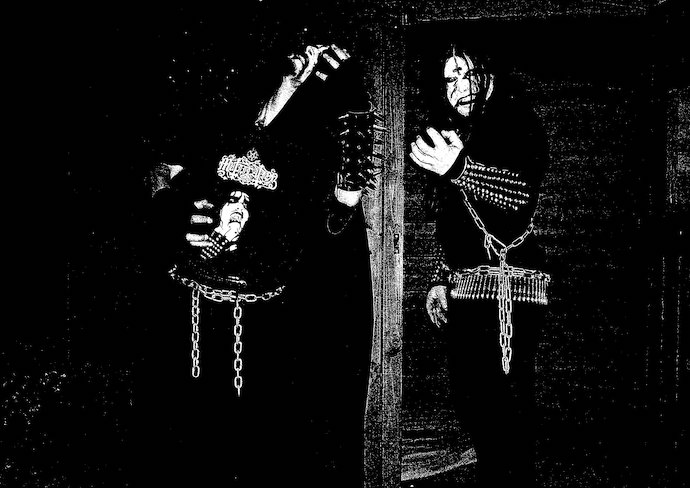 More intimidating than the foregoing warnings (and others I haven’t quoted) were the song lengths revealed in the track listing: The shortest track (which opens the album) clocks in at nearly 8 minutes; the other three each range from 11 to nearly 16 minutes. Having found few bands who can pull off such monumental sonic treks without provoking ugly yawns, I was more hesitant than I might have been from the characterization of the music as “so beyond primitive and artlessly improvisational, so nightmarishly unhinged, one could qualify it as PRE-black metal” (okay, I quoted another warning).

But a dare is a dare, so I picked up the gauntlet.

Is the music “primitive”? Well, yes indeed it is, in the sense that Vetala use a stripped-down collection of sonic ingredients in their creations and eschew complexity in their compositions — but they nevertheless create kaleidoscopes of sound. Is it “artlessly improvisational”? It does have a distinctly improvisational quality, as if the creators maneuvered themselves into the throes of some kind of possession and then let the resulting dementia take them wherever it might. And I suppose it’s artless, but only in the sense that it doesn’t seem consciously calculated or manipulative. “Nightmarishly unhinged?” Oh hell yes.

As for the sonic implements, there are drums and other percussive devices, deployed in an ever-changing and unpredictable way. The rhythmic patterns of the dry clattering and ticking noises are often capable of getting your head nodding, though they also devolve into seemingly random tones, like field recordings in some 18th century manufacturing facility.

Sometimes you can hear a guitar. Sometimes you can even hear the eerie radioactive resonance of distinct notes, which sometimes take the form of a riff or melodic refrain. At least as often, they seem to be used as devices for generating gales of abrasive feedback, or maybe something else is being used to generate those typhoons of abrasive noise. And make no mistake, these tracks aren’t easy on the ears (that’s a giant understatement, by the way).

The most torturous, most unsettling aspects of these mainly cacophonous assaults, however, come from the vocals. Grotesquely distorted, the shrieks, screams, yells, roars, gurgles, crocodilian growls, and demonic mutterings sound completely insane, and they tend not only to pierce the ears like icepicks but also nearly to overwhelm the other sounds in blast fronts of abrasion every time they leap out of that brutally shredded throat.

There are other sounds in these tracks, though it’s unclear what was used to make them — maybe a synthesizer or other keyboard? maybe effects-laden guitar strings? Whatever the source, these tonalities ping and ring, chime and swirl, warble and glide, through the shrouds of distortion. They’re used in a way that sometimes comes close to being hypnotic, or at least hallucinatory. Combined with everything else, they help render these experiences unearthly, nightmarish, creepy, and cold.

To me, the most beguiling of these tracks are the third and fourth ones (none of them has a title), perhaps because they strike me as the most multi-faceted and the most willing to indulge in melody. They actually kind of rock in their beginnings, and there’s even a lilting acoustic guitar that I think I hear in the third track’s back half. They become kind of dreamlike, in a way that’s not completely nightmarish (the fourth one actually channels a yearning brightness as well as deep melancholy in its melodies). Of course, like everything else, they’re also weird, malicious, and demented.

I took the dare. In retrospect, am I glad I did? Well, yes. Otherwise you wouldn’t be reading this and we wouldn’t be premiering a full stream of the album. I’ve actually been drawn back to it more than once, especially the haunting last track, which does something perversely pleasing and narcotic to my mind, even though the last minute sounds like a field recording in Hell.

On the other hand, the odds are that “This album REALLY isn’t for you!” But there’s only one way to find out.

Harvest of Death will rain shit all over Christmas Day by releasing Retarded Necro Demential Hole on December 25th.