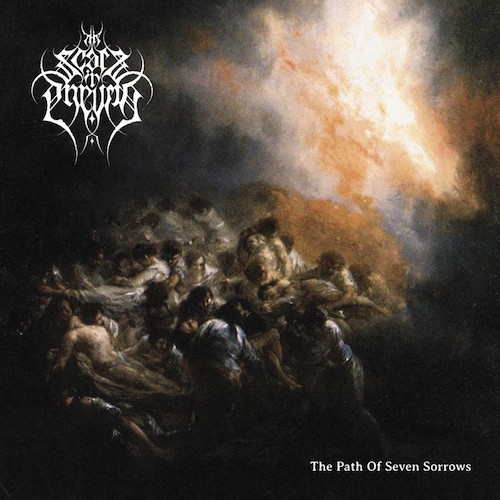 On February 8th of next year, Promethean Fire (a side-label of Kolony Records focused on black metal) will release The Path of Seven Sorrows, the debut album of the Italian band The Scars In Pneuma. Originally started in early 2017 as the solo project of vocalist/guitarist/bassist Lorenzo Marchello, the line-up was expanded with the addition of guitarist Francesco Lupi and drummer Daniele Valseriati later that same year.

While black metal forms the backbone for Marchello’s compositions, the music morphs into different sonic shapes through the incorporation of ingredients drawn from death metal and doom, and a favoritism for evocative melodies. In other words, strict genre conventions don’t hold much influence here, as you’ll soon discover through our premiere of a song from the new album named “Souls Are Burning“. 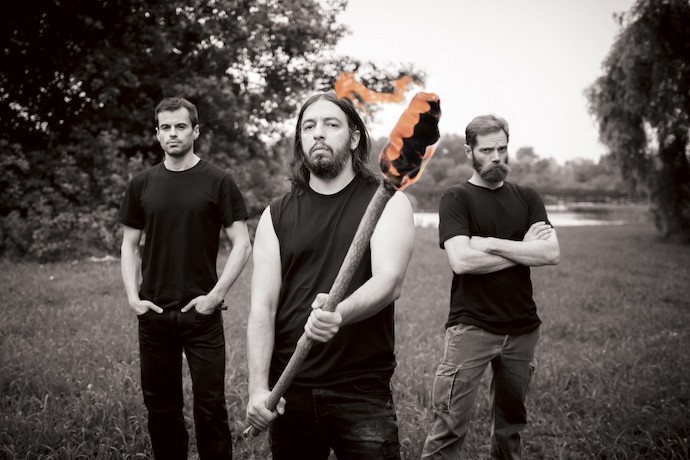 As frequent consumers of our premieres are well aware, our usual practice is to share our own thoughts about the music even though it’s very easy for you to simply listen for yourselves. And we’ll do that here as well — but this time we also have a detailed description from Lorenzo Marchello.

What we hear in the song is a multifaceted experience, one that begins with heavy, low-tuned, jolting chords and cannon-blast drum strikes, and then erupts in a seething, cutting burst of lethal tremolo riffing and battering percussion, accented by ripples of gloomy and shining melody, with a barbarous voice issuing savage growls. . The sequence that follows is guaranteed to get your head moving as the band segue into a stomping rhythm and a hard-punching riff, which becomes the foundation for a slowly slithering lead that emanates pestilential misery, eventually joined by a wailing, exotic solo and a female voice (courtesy of Irene Ettori) that adds an ethereal, haunting, gothic dimension to the song.

There’s a further change as the heaviness evaporates, replaced by the reverberation of a slowly strummed, moody refrain, and then the finale of the song brings another surge, in a flurry of battering drums and sweeping, sorrowful melody.

Those are our impressions of a song that stays in the head like a lost soul after it ends — and here’s Lorenzo Marchello‘s own description:

“Souls Are Burning” is the 2nd track off our upcoming album The Path Of Seven Sorrows and it can be ideally divided into three parts: the first one is characterized by a pounding, hypnotic black / death metal style; the second part includes swinging, rhythmic and doomy riffs and it’s one of the most “progressive” parts of the whole album. The third part includes dreamy, clean guitars and a very melodic yet epic ending. The track also features a short insert of female vocals in the second part.

The lyrics mainly deal with the meaning of life: is it worth it to get busy, or not? In both cases we’ll end up in the grave, it’s all about what we want to take in the grave with us. “Souls Are Burning” is one of the songs I like the most from the new album, and also one of the very first I wrote.

The Path of Seven Sorrows was influenced by such bands as Dissection, Mgła, Be’lakor, Rotting Christ, Forgotten Tomb, Blut Aus Nord, and Emperor, and its lyrics deal with such subjects as “your own demons, life’s biggest regrets, the passing of time, the beloved people we lost.”

Look for the album on February 8th, and enjoy our premiere of “Souls Are Burning” as well as the previously released track “Spark To Fire To Sun”.

THE SCARS IN PNEUMA:
https://www.facebook.com/thescarsinpneuma/