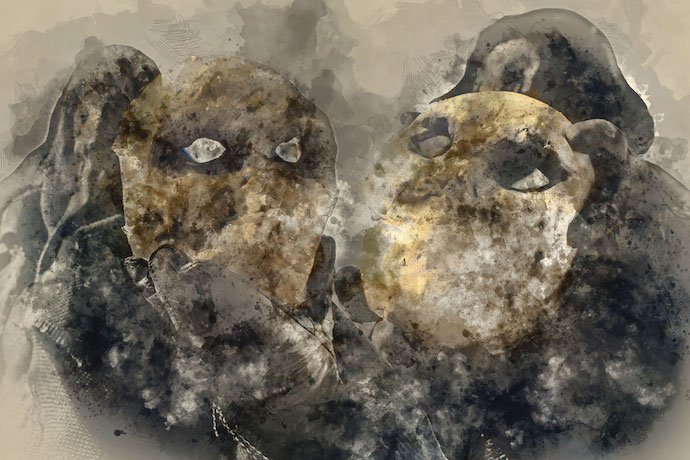 (For the final edition of THE SYNN REPORT for 2018, Andy Synn compiles reviews of all the albums released to date by Veilburner, including their brand new record A Sire To the Ghouls of Lunacy, which is being released today.)

I’ve been so busy over the last few weeks, first with a mix of work and band commitments, then with more personal stuff going into the Christmas period, that I honestly almost forgot that I still had a new edition of The Synn Report (the last one of the year) to produce.

Thankfully it didn’t take very long to select which band would be this month’s lucky recipient of my attentions, as prolific Pennsylvania duo Veilburner are releasing their fourth (and likely finest) album today via Transcending Obscurity Records, meaning that the timing really couldn’t have worked out better.

With an incredibly diverse, yet distinctive, sound – the closest true comparison I can think of is with those Avant-Garde Australian extremists in Ur Draugr, though you’ll also see that, multiple times throughout this column, I’ve tried to make references which I think will appeal to our readers – over the past four/five years Mephisto Deleterio (instrumentation) and Chrisom Inferium (vocals) have produced several hours of warped and twisted, tumultuously technical and deviously discordant Black/Death Metal which doesn’t really sound exactly like anyone, or any thing, else out there. 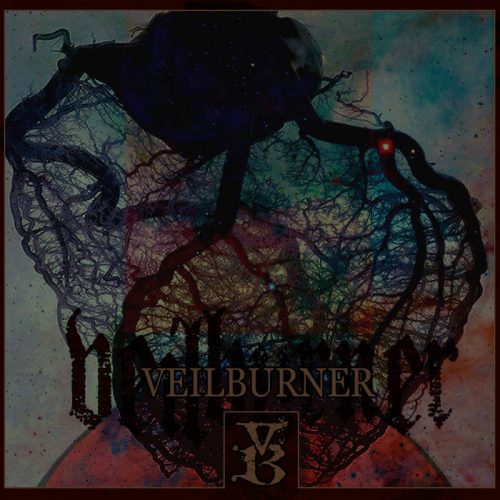 Unsurprisingly, the band’s first album remains the closest thing they’ve got to a “traditional” Black/Death Metal record, although even here the word “traditional” is used only in the loosest way.

The moody, melodic menace of “In The Constellation of Dust and Shadow” frequently sounds like a darker, more abstract version of Behemoth, albeit a version of the band who actually believe the message they’re trying to sell to you, rather than simply going through the motions, before the poisonous proggery of “Nil Absolute” manages to be both a cataclysmic convulsion of deathly dissonance and a skin-scraping deluge of discordant blackened fury at the same time.

“Purgatorium” is four minutes of mechanical rhythms and whirling dervish riffs that doesn’t pull any punches or show any mercy to the listener, while “Where the Light Is Death and Darkness Is the Lord” is an even more aberrant and unconventional affair, coming across like some mutant hybrid of Tech Death and Atmospheric Black Metal, which leads – in angular, spasmodic fashion – into the haunting melodic majesty of “Solarcide”.

“Revelation Genesis” is another Akercocke-esque blasterpiece of prodigious, punishing proportions, which seems practically straightforward in structure when compared to the experimental, pseudo-industrial lurch of “Stigmatic Levitation” (which reminds this particular listener quite strongly of The Axis of Perdition at their most menacing).

Concluding with the juxtaposition of “Idol Horror” and “Damnation A.D.” – the former a short, seductive piece of acoustic ambience, the latter a face-melting blast of pure Death Metal malevolence – The Three Light Bearers may seem a little primitive now when compared to the ever-stranger, and ever-more-savage stuff which would follow it, but still retains much of the same power and intensity as it did the very first time I heard it. 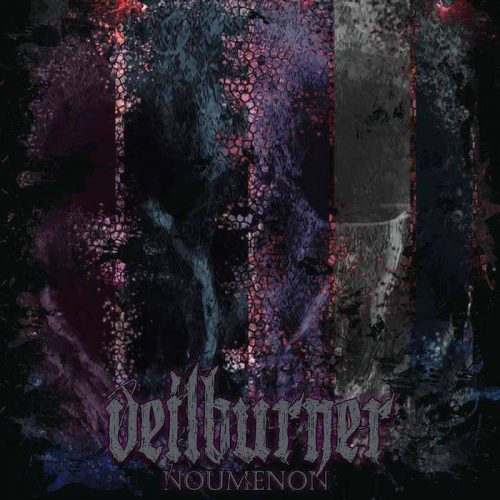 The second installment in the band’s conceptual trilogy of albums begins with the metallic madness of “Astral Caskets, Abstract Flesh”, and the group’s evolution in sound is immediately apparent, with everything sounding significantly harsher, heavier, and somehow even darker.

The saw-toothed guitars and pulverising drums possess an almost mechanical precision reminiscent of Industro-Death dealers Myrkskog or Wormed, laying down a veritable barrage of inhuman brutality atop which Deletero and Inferium deliver their increasingly warped patterns of strange synths, finger-shredding leads, and babbling, demonic vocals in a way which frequently defies rational explanation.

“Ever Relapsing Fever” is armed to the teeth with an array of stomping, industrialised Black Metal grooves, jagged, limb-ripping riffs, and some surprisingly sharp and seditious hooks, which contrasts nicely with the angular, avant-garde extremity of “Grave Wax Cenotaph”, which finds Veilburner walking a razor’s edge between the ugly technicality of Artificial Brain and the dissonant pseudo-melody of Deathspell Omega.

The first half of the epic “Godspeed Lucifer” is the sound of pure chaos given form and function, and is almost totally overwhelming in its intensity. However this is simply the set-up for the song’s far more nuanced and melodic second half, wiping the slate clean with an explosion of pure fury before writing something new in the aftermath.

Landing somewhere between the blackened brutality of Enthroned and the discordant density of Ulcerate, “Scorched Earth Exorcism” is exactly as OTT as you might expect, especially during its climactic transformation into a psychedelic celestial freak-out, which serves as a perfect primer for the destructive dissonance of “Prayer Morgue Orphace”, which sounds a little bit like Dødheimsgard trapped in the middle of the world’s worst acid trip.

“Omnicosmic Interstellar Lucivore” is an experimental piece of atmosphere-heavy, blackened cyber-prog, with the band eschewing any form of straightforward or standard song-structure in favour of a looser, more linear approach that serves to propel the listener headfirst into the creeptastic, slow-burn of “IHVH”.

Last, but by no means least, the eerie atmospheric soundscapes of “Hypsiphrone” brings the album to a close in a suitably haunting and unorthodox fashion, reminding you that trying to second-guess Veilburner’s methods is a fool’s errand at the best of times.

For their third album in as many years Veilburner pulled out all the stops, ending their transhumanist trilogy with what was, at the time at least, their most outlandish, and outstanding, effort to date.

One thing you’ll immediately notice, as opener “Postmortem Exordium” attempts to rip and claw its way through your ears directly into your brain, is that the lines between the band’s varying ingredients and influences have practically blurred into nonexistence, with little to separate the angular aggression of Gorguts from the polluted atmospherics of Godflesh or the mutated malice of Portal this time around.

This sense, that all bets are now off, and all boundaries have now been broken, leaks through into “Necroquantum Plague Asylum” like some sort of caustic industrial runoff, the song by turns exposing different sides of the band’s many-angled sound, moving from unsettling ambience to unstoppable fury to moodily melodic over the course of just under seven malevolent minutes.

“Vaterchen” is a morbid monolith of dissonance and doom that sounds like Ævangelist remixing classic Incantation whilst in the throes of a major depressive episode, though this comparison only really touches on the ugly, soul-crushing depths which the song reaches as it steadily grows heavier and more abrasive, while “Eucharist of the Breathing Abyss” finds Deleterio mangling his fretboard in ever more twisted and tormented ways even as his companion attempts to summon demons through his throat, all building towards a truly arcane and abstract finale.

“Masquerade Macabre” is a haunting instrumental interlude which showcases a much more meditative, albeit still subtly menacing, side of the band, after which the blistering “Baphometic Catalyst” unloads itself all over your face in a blasturbatory frenzy that only seems to get more furious, and more violent, as the song progresses, until it suddenly switches gears, sheds its skin, and transforms into a truly uncanny and unsettling outro of dissonant doom.

With “Dilemma Manifestation” the duo take things in an even more unexpected direction, one which recalls (although actually predates) the transformative journey which Imperial Triumphant took on their most recent opus, Vile Luxury, in that it finds the band playing obscene games with melodies and hooks which should make their sound smoother and more listenable but which, instead, all end up twisted and contorted into queer new forms that purposefully jar the ear while still remaining disgustingly catchy.

Saving the best, or at least the most unexpected, for last, The Obscene Rite closes with the epic “In The Revelations of Bloodstained Void” and the hypnotic “Phainops”, the former an over-eight-minute odyssey of titanic riffs, towering melodies, and tortured atmospherics, the latter a pulsing industro-black anthem of electro-clash synths and anguished vocals, which together prove that it’s almost impossible to predict what this band are going to do next. 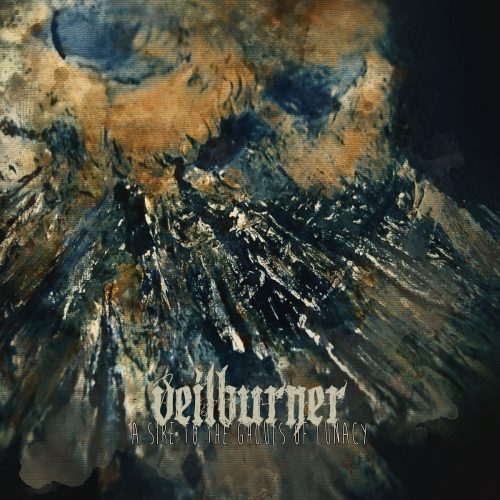 If, a couple of years back, you’d have tried to tell me, or anyone else, that the fourth Veilburner album would turn out to be their most melodic yet, you’d probably have been committed on a 48-hour observation period for your own safety.

But, wouldn’t you know it, that’s precisely what has happened on A Sire to the Ghouls of Lunacy.

Of course that term “melodic” comes with a major caveat, in that these eight songs are still capable of stripping the flesh from your bones and blitzing your brain like a mixture of bleach and bath salts injected straight into your ear canals, but the inclusion of ever-darker, ever-more compelling splashes of melody and moody ambience, soaring lead lines and, wouldn’t you know it, some honest-to-god clean vocals (on the Anaal Nathrakh-esque “Panoramic Phantoms”) definitely qualifies this album as their most melodic yet… at least in relative terms.

Opener “Introvertovoid” is easily one of the best songs the band have ever written, melding a bevy of hard-hitting, mechanistic riffs and pulverising blastbeats with some seriously strange and proggy moments, as well as one extraordinary solo section, and is followed in swift succession by the chunky, chugging riffs and spine-tingling harmonies of the aforementioned “Panoramic Phantoms”.

The sinister pseudo-melodies, finger-shredding riffage, and inhuman intensity of “Agony on Repeat” hearkens back to the band’s earlier years, only somehow more ravenous and more refined in nature, while the unconventional hooks of “Abattoir Noir” seem to be drawn directly from the same warped well of inspiration that serves to feed such similarly eccentric artists as Sigh and Dødheimsgard.

The title-track is six minutes of scalding, acid-drenched guitar work and howling, snarling, gibbering vocals, with Inferium doing his very best to sound like a man possessed. Twisting and turning and spitting like a viper, it’s simultaneously savage and seductive, dissonant and melodic, and another major step in the evolution of the band.

The deviant prog-doom of “Glory Glory Grotesque”, however, could well be a step too far for many listeners, as the almost djent-like guitars during the song’s mid-section are certain to be a shock to the system. Still, once the initial surprise had worn off, I was pleased to see just how well this groove-like element had been incorporated into the band’s corrupted cauldron of intriguing influences.

Compared to the previous track, the thrashy and frenetic strains of “Upstream and Parallel” are perhaps closer to what Veilburner fans might expect from the devilish duo, although even here the increasingly Tech Death feel to the riffs and the surprising melodic embellishments (particularly during the song’s spooky, synth-based outro) find Deleterio and Inferium still pushing the boundaries of their sound.

Ending with the Khonsu-esque “Where Torment Has Danced Before” – one of the most abstract and atmospheric tracks on the album – A Sire to the Ghouls of Lunacy is yet another example of Veilburner at their mind-bending, genre-blending best.

One Response to “THE SYNN REPORT (PART 104): VEILBURNER”