How bands come to exist and the connections between their lives and their music is usually of only secondary importance (if important at all) to the appreciation of the music itself. Yet in some cases it proves interesting, and might even shed a bit of light on what we’re hearing, and this is such a case.

We are told that the origins of the Swedish black metal band Blodskam dates back to 1998 when the two brothers Aghora and Dödfödd (as they have named themselves) “decided it was time to put the family madness on public display”. But rather than fighting in public to the dismay of their parents (or maybe they did that, too), they began writing music. But it took quite a long time for the bad seeds planted then to bear fruit, “due to other musical engagements, and some mental health issues”. 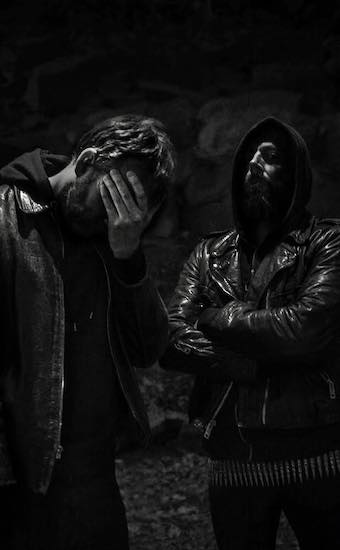 The Blodskam project was revived only in 2014, by which time the brothers were living in different places (Dalarna and Stockholm). They wrote new material, finished some of the old songs, and, with the help of session drummer Kim Filppu from Convivium, they recorded a debut album named Là-Bas, which is now set for release by Suicide Records on February 6th. It is described on behalf of the label and the band as “a desperate cry from the subconscious”:

“Each song stands on its own, but also reveals a common thread and can be seen as part of a greater narrative. It is a story of psychosis, hallucinations, endless corridors and floors full of filth which shows a glimpse of an enclosed institution of human decay. What is real and what is just drug fuelled imagination?”

Something of these sensations and reflections would come through in the music, even if you hadn’t been so educated, and certainly something of the kind of turbulence and ferment that flares when brothers work (or fight) together, entwined with the effects of shared experiences; I say this as one of two brothers myself, and is more a matter of speculation than personal knowledge of the workings that produced Là-Bas. What’s not speculative, but instead unmistakable, is the emotional intensity that floods the track we’re premiering from Là-Bas, the name of which is “Routines” — and is anything but routine.

The sound is rough and powerful, and also piercing — a pulse-pounding and heady experience that manages to be physically compulsive even as it swirls the mind and entangles the heart. Kim Filppu makes his presence known in arresting fashion, delivering piston-hammering and hard-rocking beats in conjunction with visceral bass lines that give the music a bit of gloomy undercurrent as well as a deep, thrusting rhythm. But the music’s flaring intensity and raw emotional resonance is even more pronounced in the vocalist’s vicious snarls and splintering howls, and even more so in the guitar work.

The fast riffing and leads generate bursting waves of gleaming sound — roiling and rising, seeming to express yearning and ecstasy — while slashing chords and flickering notes develop a sound of anxiety bordering on psychosis. And in the finale, when the drums pound and tumble, the music sears like a brand. 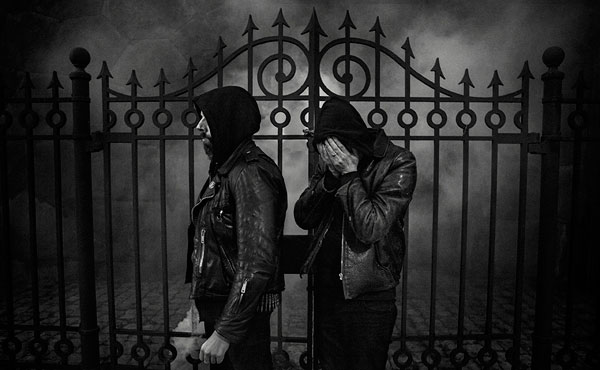 “Routines“, all by itself, generates intrigue about Là-Bas, and makes it an early-year album well worth paying attention to.

The album was recorded, mixed, and mastered at Misfortune Recorders Studio in Ludvika, Sweden by Johan Hjelm, and it features the artwork of Christoffer Engvall. Look for it on February 6th via Suicide Records. For more release info, check these spaces:

One Response to “AN NCS PREMIERE: BLODSKAM — “ROUTINES””