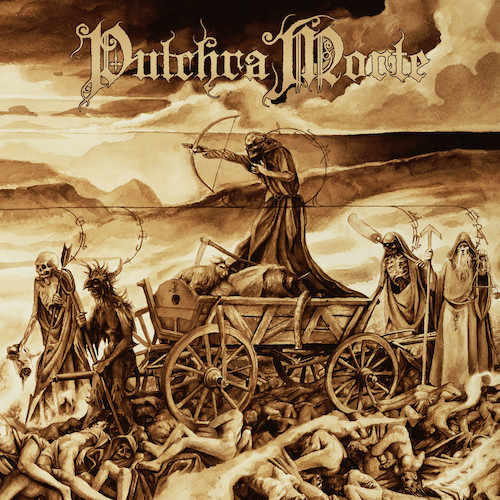 The American death/doom band Pulchra Morte (“beautiful death”) began to take shape in 2017 through the collaboration of vocalist Jason Barron, drummer/backing vocalist Clayton Gore, and guitarist Jeffrey Breden. Eventually they were joined by bassist Dylan Kilgore and guitarist Jarrett Pritchard, who also recorded the band’s new album, Divina Autem Et Aniles, adding it to a long list of other records he has produced and engineered (for such bands as 1349, Goatwhore, Wolvhammer, Gruesome, Exhumed, and Brutality).

But the talents brought to bear on the creation of Divina Autem Et Aniles don’t end with that quintet of artists (who collectively are current or former members of Wolvhammer, Eulogy, Harkonin, and Withered, among others). The album also includes the vocal talents of former Eulogy participant Heather Dykstra, the performance of cellist Naarah Strokosch, and additional backing vocals by Tor Stavenes (1349, Svart Lotus); it was mastered by Chris Common (Tribulation, Primordial, Exhumed, Gruesome); and it features cover art by Jordan Barlow (Goatwhore, Haarp, Psychon Vex).

We suspect all these credits will have seized your attention by now, but the payoff (of course) is in the music, and we have a hefty downpayment for you today in a premiere stream of the album’s eighth track (out of 10), “Shadows From the Cross“. 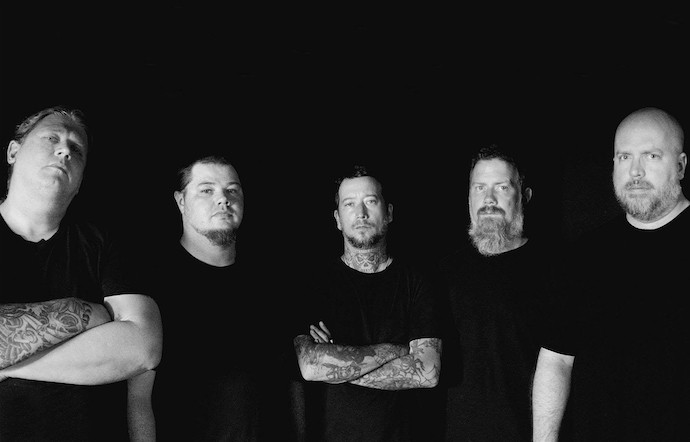 Lyrically, we’re told by Jason Barron that the song is “a story of both the godly abandonment of people, but also people abandoning and sacrificing their gods”, “people realizing their own divinity, with no need for any other gods”. Musically, it sounds like a bruising trek into the mountains of madness.

“Shadows From the Cross” is granite-heavy and gruesome, physically arresting and yet atmospheric — drenched in the sensations of pestilence and fleshly rot. With a mid-paced gait that seems to lurch, the track is anchored by an ominous, heavy riff and hard-slugging, rapidly rattling drum beats. Jagged guttural growls, which elevate into ghastly howls, lend fury and fearsomeness to this dark and deathly ode, which is further embellished by an eerie darting riff and by leads that flicker and also ooze misery. And on top of all that, the music proves to be chillingly memorable and insidiously addictive.

Pulchra Morte seem to have found a very dark path that suits them well and has gotten the creative juices flowing — they’re already at work on the next album, and live appearances are also in the works for 2019.

Divina Autem Et Aniles will be released on February 1st (CD and digitally) by Ceremonial Records, and it’s available for pre-order now. Below you’ll find not only our own premiere but also streams of two other previously released tracks — “Soulstench” (presented with a video) and “Thrown To the Wolves“.

2 Responses to “AN NCS PREMIERE: PULCHRA MORTE — “SHADOWS FROM THE CROSS””