(This is TheMadIsraeli’s review of the new album by Nailed To Obscurity, which was released on January 11th by Nuclear Blast.)

Nailed To Obscurity is a name I’ve heard a lot, but whose music I hadn’t listened to — just too much metal to check out at any given time, really. My ignorance stretched as far as not even knowing what kind of metal they played, if you can believe it. But when I checked out the single and title track to their new album, Black Frost, I discovered immediately that this band was my thing.

Nailed To Obscurity play a style of doom-driven melodic death metal that hits an intersection of In Mourning and a lot of Dan Swanö’s recent output with Witherscape. There are, of course, hints of Opeth, which I think were pretty low-key influential on this style, but the previous influences I mentioned are definitely at the forefront. 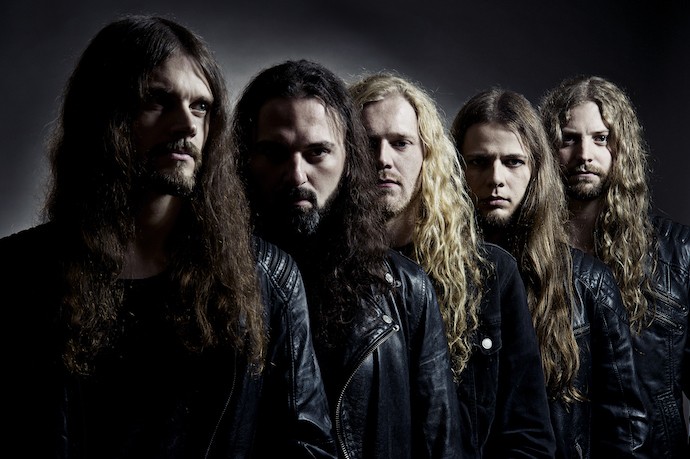 With all that said, Nailed To Obscurity are masters of their craft, and they understand the core principle of melodic death-doom: Make it really fucking sad, and make it really oppressively fucking heavy, and keep it all at a solid groove that drags just enough but doesn’t veer into lacking momentum. The melancholy is most definitely there, and it’s mostly where I derive my In Mourning comparison. The melodies have that WEIGHTY sense of sadness to them, but the phrasing definitely falls more in line with my Dan Swanö comparison.

The vocals of Raimund Ennenga are a combination of haunting cleans and exceptionally meaty death snarls in that Swanö/Åkerfeldt tradition, and oddly his vocal style is indicative of NTO’s entire approach. Everything is really thick — the guitar tones, the drum tones, the mix in general, the emphasis on weighty minimalist riffing that employs a lot of chord work with octaves for emphasis. This album definitely delivers on every front in making everything feel visceral and powerful without diluting the dragging pace and emotive melodic aspects.

I don’t have much more to say, so I’m just going to link the advance tracks below and leave it at that. This is a great album if you’re into this style, and it’s certainly piqued my interest enough that I’ll be going through the band’s discography sometime soon as a deep dive. Black Frost is definitely one of the best albums of this new year thus far.