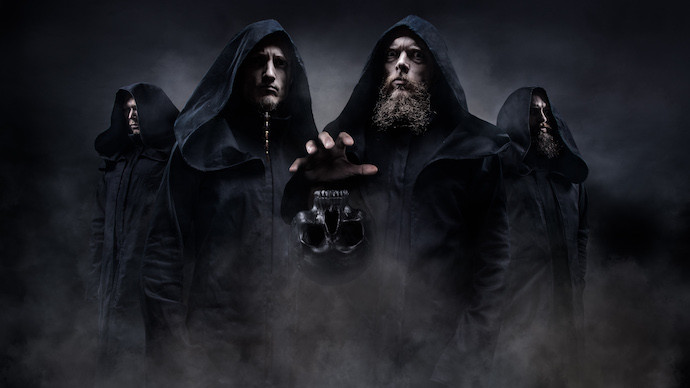 (This is a very interesting interview conducted by our Norway-based contributor Karina Noctum with Carl Stjärnlöv, guitarist/songwriter of the long-running Swedish metal band Diabolical, whose fifth album Eclipse will be released on February 15th.)

You tour in Europe, you have established the band, and many have listened to or seen you live here, but how would you introduce yourselves to a U.S. audience? Diabolical can no longer be described as just another Swedish band (and good for you 🙂 )

We’re a death metal band that has evolved into something else; we’re not bound to any traditional views of what death metal or black metal “should” sound like. While we still have our foundation in death metal with some dashes of black metal, our music incorporate choirs, orchestral parts, and mellotrons. On our new album there’ll be plenty of clean vocals as well. It shouldn’t come as a surprise that bands such as Pink Floyd and King Crimson are held in just as high regard as Morbid Angel among the members of the band, and I think that’s reflected in our sound.

You are kind of going your own way, experimenting a bit this time around as well, right? What would you say listeners can expect in the new album compared to the previous one?

We have put plenty of effort into the choirs this time. I think we had around 20 choir singers in total this time. That will definitely add to the epic qualities of this album. We’ve added plenty of clean vocals with lots of harmonies this time, which we’ve had only sparingly in the past. I think that will add a flavour that we haven’t really had before. 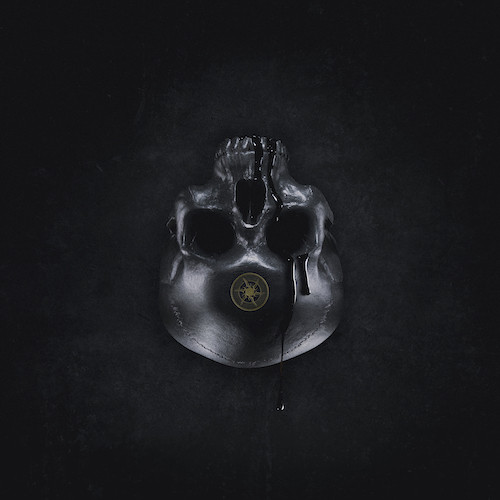 Could you tell me a bit about how all the elements in the music help to build the atmosphere?

I think the atmosphere of this album developed gradually while we were writing the songs. I had the theme of the album ready rather early and initially I envisioned the music to be much more ugly and disharmonic, but as we wrote the songs they took a slightly different path. It’s really subjective of course, but I think the overall atmosphere became more sad and epic rather than ugly.

What’s a good atmosphere, in your own words?

Who is the album producer? I guess it is more of a huge collaborative effort?

Yes, Sverker, our guitarist, is producing it at Wing Studios this time as well. Both me and him have been pretty much locked up in that studio for months, sometimes working shifts to get the album done. It’s been a lot of hard work and long hours, but now that we have the result in our hands I feel very satisfied and confident we’ve produced something really profound.

When is it going to be released?

The album will be released on the 15th of February on Indie Recordings.

Do you write the guitar parts first and then make the vocals fit, or do you kind of adjust both parts along the way?

It depends on my initial idea. I think my best work comes when I get a very clear first idea. It could be a vocal line, a rhythm, a melody, or a riff. It’s usually a full arrangement in my head which I then need to transcribe and make a real song with all instrumentation and vocals. It normally goes through various stages between despair and euphoria before I reach some kind of result.

What inspires you to write, and how does the writing process go from research to the writing itself?

First off I’d like to start by saying I’m a firm believer that every artist should have as a goal to make an impact on people. If you only strive to just “make a song” to fill up an album so you can release it and go on tour, you’re making a big mistake in my book. As an artist you don’t necessarily have to have the intention to make something revolutionary and blow people’s minds (although I’d say that’s an honourable intention), it can be something fairly simple, but the intent should be there. This of course goes for lyrics as well.

We’ve been increasingly ambitious in terms of lyrics, and our previous full-length album came with a short novel that connected each song to a chapter of the book. Our upcoming new album Eclipse is once again a concept album, but this time the lyrics are carrying the concept on their own. Although the response to the book concept with Neogenesis was great, I felt that the message often went over people’s heads. This time I wanted to be less metaphorical and more direct.

The concept this time is about mankind and the worst sides of us. We are living in a crucial time in the history of humanity. Although we’ve developed technology to cure diseases that used to kill millions, and developed the ability to send spacecraft beyond the limits of our solar system, we’re still letting our worst sides dictate a lot about the nature of our relationships in the small and grand scales. This shortcoming might prove to have dire consequences not only for the individual but for our species as a whole.

So I gather the lyrics are related to the consequences of what we do now, or is it gonna be future scenarios of destruction?

The lyrics on Eclipse are a reflection on our world today. There aren’t any fictional scenarios. At the very core of the human experience lies the relationship between two people, and the most important relationships we form during our life shape our reality and our world. Our world is by extension a reflection of our close relationships. We’re all part of the human race and we’re all accountable for the world we’ve created, but unfortunately mankind is very proficient at being irresponsible, and so are individuals. Ignoring everything that’s going on around us, saying “fuck everyone and everything” in some kind of rebellious spirit does not take away any responsibility. By doing so you’re just stating that you’re an irresponsible child. Anyways, I want to leave some space for the listener/reader to reflect on his/her part in this. 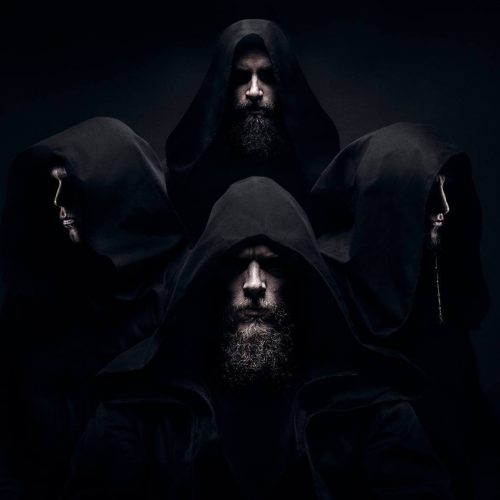 Can you tell me about what inspires you to write?

My inspiration usually comes from what I see in the world around me. When there’s such madness in the world and people commit horrible crimes against each other, against other species and the planet, there’s nothing else I can think of when I write lyrics. It doesn’t feel like this is the time to write about Satan, dragons, zombies, or cryptic occultism that nobody understands. Escapism simply isn’t what I like to focus on.

I think these kinds of lyrical themes are pretty thrash/grind 🙂 — well, depending on the point of view you use though….

I think there’s a clear difference between what we do and what thrash/grind bands do. Although thrash/grind bands have a lot of social criticism in their lyrics I think our framing is very different. Also, there are things I touch upon in my lyrics that you will not find in thrash/grind lyrics. I mentioned the interpersonal relationships earlier, and that is something I explore on a deeper level in some of the lyrics. I think there are aspects of our relationships and forces within and between individuals that are hidden to most people, that have tremendous transformational power.

Some say that “the world has never been better than it is now” — is there no room for optimism? Do you lean more towards pessimism because it is metal than you would if it were just a personal opinion?

There is room for optimism indeed! While things are looking rather bleak for mankind I do believe in our ability to transform and implement change. Some aspects of the world are in fact changing for the better, as you say, while in other areas we are failing miserably. We still have a long way to go in becoming the individuals we could become and creating a world to be truly proud of.

How do you adapt the lyrics to the music? And how difficult is it to do that?

When it comes to fitting the lyrics to the music it’s usually a process of coming up with a vocal pattern for growls, or a melody for clean vocals. I like to come up with this as early in the writing process as possible. That usually renders the best results as opposed to putting vocals on a near-finished song. When you think of vocals early you can build the riffs, rhythms, and melody of the song to integrate much better with the vocals. Then it’s a process of putting words to the initial structural idea. This can be tricky, but it’s worth the effort. 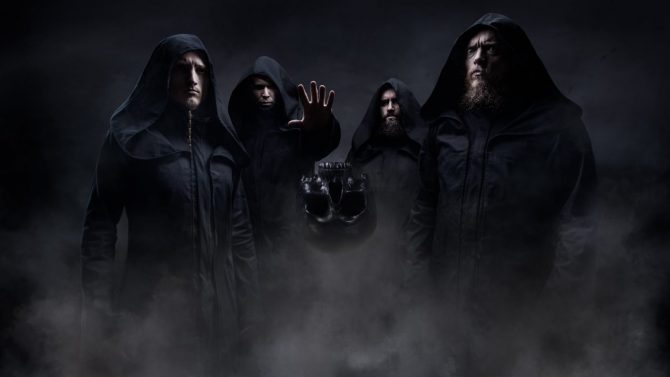 Do the cleans and choirs get a different theme or “personality” when it comes to the lyrics, as opposed to “evil” growls?

I don’t think so really. I have a hard enough time producing quality lyrics without thinking of adding personas to the vocal styles. However the choirs on Eclipse sing in different languages: English, Swedish, and Latin.

How do you keep lyrics original?

Regarding keeping lyrics original I think there’s a plethora of cliches in metal that should be abolished from metal lyrics. For example I try to avoid words like “death” and “darkness” since they’re too ubiquitous in metal lyrics. They’re watered down and usually mean nothing when you write them anymore. There’s a really interesting web page that an old colleague and music data wizard has put together that anyone writing lyrics should check out. It’s called “Genres in their own words” [here] and lists 1000+ genres and the most common words in their respective lyrics. My advice is to use the listed words sparingly and with caution.

Is music a good therapy for you to let out all those worries and probably the feelings of anger and disappointment towards all the fucked-up things you see in the world?

I’m not sure “therapy” is the right word. I have things to say and a message to convey. Music is my voice, probably the most efficient voice I could ask for, and I’m doing my best to utilise it.

On the topic of the craft of lyric writing I think a lot of metal lyricists should educate themselves a little. A lot of metal lyrics are complete and utter nonsense tossed into songs just to give the vocalist something to sing. However, I’m not claiming to be a great or even good lyricist myself and I personally think it’s excruciatingly difficult to write lyrics. But I’ve taken measures to improve, and lately I’ve been reading some books on lyric writing. I can recommend the book Writing Better Lyrics by Pat Pattison. There’s some really good stuff in there that made me realise how crappy some of my own lyrics really are. So I hope I’ve improved a little and will continue to improve even more as a lyricist.