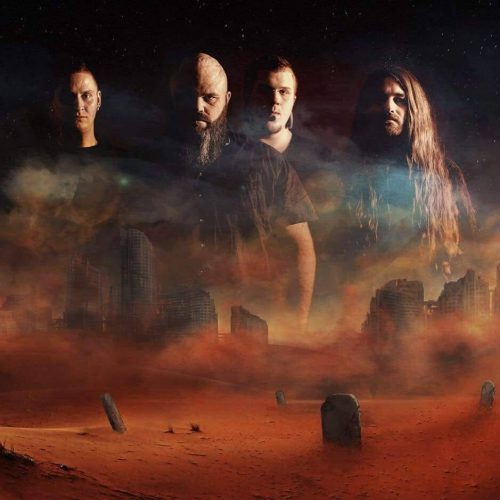 If you don’t know, and love, Soreption, then you don’t belong on this site.

There, I said it. Now get out.

Of course if you’re still reading this then you’ve clearly either a) realised I was joking with the above statement, or b) are a total contrarian who has decided to carry on just to spite me.

Anyway, to cut a long story short, it was just over a decade ago when I stumbled across Soreption‘s debut EP, Illuminate the Excessive, in my local record store, and I’ve been an avid fan of the band ever since, following their progress through all the ups and downs of their career, even to the point of selecting their second album, Engineering the Void, as one of the best albums of 2014.

The band’s latest release, last year’s Monument of the End, continued their run of top-notch, high-octane Technical Death Metal mastery, so I’m particularly pleased to have been able to get hold of the group’s long-time vocalist Fredrik Söderberg for this latest edition of Waxing Lyrical.

I started to write the lyrics back when I was in my first band, at about 16 years old or so. The reason I started was simply because I liked it… why they let me, I don’t know!

But even back then I viewed the lyrics as an important part of any song. I could sit for hours and just read the lyrics of my favourite bands, so I ensure I always put a lot of work into what I write, for the appreciation of those people who like the actual lyrics as much as I do.

With that said, I always try to let other members have some input, although since the words are actually verbalized by me, I generally have the last word if our ideas differ.

This usually doesn’t happen though, and the most frequent changes that happen to the lyrics are just about trying different phrasings, etc, which will sometimes involve me changing a word or two.

Inspiration is a weird thing. I get it from whatever I have been listening to, reading, watching or thinking about at the time when I write the lyrics. Since I have always had a very active imagination it’s been helpful for me to categorize my thoughts around a particular theme for each album or song.

For example, in Soreption we have had a dystopian theme on the three albums we have released so far, and the inspiration to those albums came not just from fiction but from what I take in from the world around us. You can get a lot of dystopian inspiration by just reading the news these days!

There are so many good lyricists out there that I could probably go on about this forever. Sometimes it’s hard to know if it’s the actual lyrics or the lyrics with the music that makes it so good. Sometimes it’s just a delivery by a certain singer.

A line that I come to think of directly is by Wovenhand, from a song called “Dirty Blue”.

There is a sorrow to be desired

To be sorrow’s desire

The song is very dark but I feel that the line itself has so much depth in its simplicity.

Another song that I think is beautifully written is Katatonia‘s “The One You Are Looking for Is Not Here”:

I must lead the way to this conclusion

I let you inherit these words I think

Do you see how death will bestow seclusion?

The one you are looking for is hidden from you

To me it is not that it’s hard to see what the song is about, it’s more about the words they choose to use in the chorus. Sometimes the simplest thing can do the trick.

First and foremost I have become less afraid of doing my own thing. The younger you are, the more you are affected by other people’s input. Nowadays I write the way I do just because I enjoy it. If people don’t like it, it does not affect me as much.

Lastly, I have become better at writing around a theme. Before I usually wrote lyrics that were about me or a version of me. Nowadays I put the main theme as the foundation and have layers of metaphors for other, underlying themes (and after that is done, I might hide some things just for me). So one song can, in the end, have several meanings.

I want the listener or reader to take it in and make the lyrics their own, so these days I usually don’t discuss or tell people what my lyrics are exactly about.

It’s a difficult question. I rarely remember all of the details about this stuff but the work I put in on “Deterioration of Minds” I remember quite well.

With all our songs, I usually get a recorded rough mix of the song, often in an early state, along with an outline from Tony about all the parts of the song and where he thinks there should be vocals. This gives me a quick way to start writing lyrics.

Sometimes the form will change when I work with the song. In the case of “Deterioration of Minds” I knew what the song was going to be about, and built my lyrics around this phrase/title.

The rough idea was that we as a human race find ways to better ourselves through techology and science but at the same time we get more and more uneducated and simple.

When I write the vocals and lyrics in Soreption I try to focus on enhancing the groove of the song and highlighting certain instrumental parts. This can be seen in the first verse of the song:

As it became peacefully colder

All that was will never be

The warmth of the welcoming black

All that was will never be

In this song, both the rhythm and the lyrics fell into place quite quickly, as it’s one of our “easier” songs with a lot of groove. With that I felt that the song really needed a memorable chorus so I went back to the main theme and wrote

Time is killing us slower and slower

Deterioration of minds get wider and wider

Personally I think it’s a very memorable chorus both musically and lyrically.

So, if I am to compare how I did it before and now, the first thing to address is that the whole band has evolved. We all have gotten better at what we do, and with that we do and write things a bit differently, and you can see that on “The King of Undisputed Nonsense” from Monument of the End.

When I first heard this song I knew that I really wanted to highlight the main riff by not putting vocals all over it. And since the drums are very fast and the riffs stand out, I took a different approach to the groove and, because of that, the lyrics.

The theme of the newest album is “the end”, or “ways our world could end”. And while I don’t like to talk too much about what my lyrics mean, generally speaking “”The King of Undisputed Nonsense” is about how man has created the environment that will end us.

The lyrics on the first verse starts with:

Where nation’s pride is at its peak

When the winds of disdain

Collaborate with opportunity and the minds of the weak

The idea here was to use a very simple vocal pattern to let the instrumental work shine but also to provide a lot of power in the vocals to still get the feeling of energy from them.

The chorus is quite short and, in the same way as with “Deterioration of Minds”, I felt that I wanted something memorable because it was so short. So the lyrics became:

The king of undisputed nonsense

Which became more or less just a hook that matched the theme of the song, which in turn became the song title and provides contrast to the slow and powerful vocals of the verses.

The last thing in this song was to tie it all together. And so the last riff is where I put some lyrics over the main riff to give the song a good ending both musically and thematically.

I think it’s hard to get all of your ideas in place when trying to share how your creative process works but I hope that you have gotten something interesting from this.

If you are interested in my lyrics my recommendation would be that you listen to, and read the lyrics from, all the albums in chronological order. They were written for that.

As for the future, we have several things planned but nothing I can share now, but anyone that is interested in Soreption should follow us on social media: