Unbound was the creation of an (almost) entirely new incarnation of Sargeist, with only mainman Shatraug remaining from the line-up which gave us such gems as Disciples of the Heinous Path and Let The Devil In, but it too turned out to be brilliant. Given that the new line-up included a guitarist from Nightbringer, a bassist who dwells within the Saturnian Mist, and two members who provide bass and vocals for Desolate Shrine, all of whom (along with Shatraug) stand out in the sharpened production of this record, that should have come as no surprise. 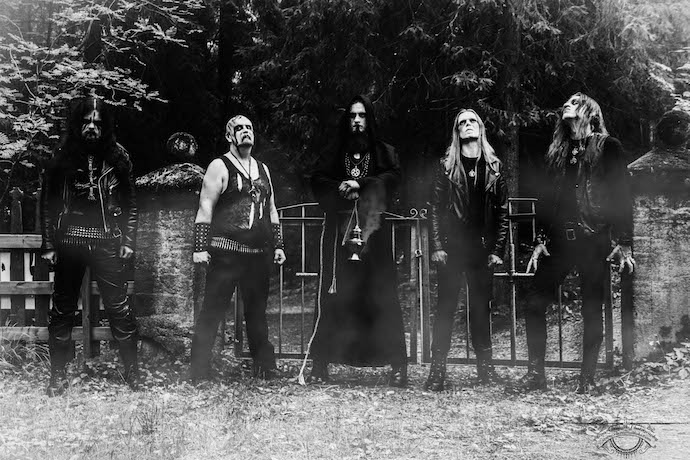 I’ll venture to say that Unbound had no weak links in it. Some songs were stronger than others, but all of them were mighty musical deeds well worth experiencing and remembering. The panoply of hooks across the album made the choice for this list a difficult one, but I do believe the title track is the most deserving. By way of further introduction, I’ll quote from Andy Synn‘s immediate impressions of the song in his johnny-on-the-spot review:

“The title-track is another monstrously groovy, surprisingly melodic, slab of shamelessly infectious sonic filth whose mix of incredibly catchy riffs, slithering tremolo melodies, and blast-fuelled propulsion might as well have the words “True Black Metal” stamped on it.

“In lesser hands of course it might come across as a tad derivative and, I’ll admit, that was my worry at first too, but there’s so much going on underneath the surface here (including a bunch of clever counter-melodies and some brilliant drum work, not to mention a truly ravenous vocal performance) that it makes all these familiar elements seem as new and as vital as when they were first freshly exhumed from the grave”. 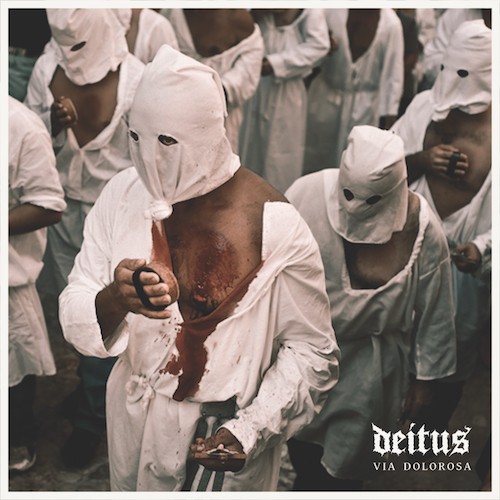 As described by I, Voidhanger Records, which released the second album of London-based Deitus on December 14th, the music is “rooted in the old-school black metal tradition of Dissection, Satyricon and Mayhem, but prone to heavy metal contaminations that make the music very varied, vital and essential.” Those words were not mere puffery. It was also true, as the label reported, that “guitars are constantly under the spotlights here”.

This truly was a glorious record, and one that eluded many year-end lists (I’m utterly convinced) only because it arrived just a couple of weeks before New Year’s Eve. I hope, through my writing about it again now, that maybe a few more people will discover its wonders. Feel free to skip to the stream of the song I’ve added to this list, but I’m still going to repeat what I wrote about it late last year (because we premiered it) :

The song has much to recommend it, but the guitar leads and the soloing stand out in a way that’s extravagant, and often spectacular, yetl not “showy”. And the way in which the song builds toward shining crescendos made me think more than once of that Zeppelin classic, “Stairway To Heaven”.

The interweaving of sorrow and luminosity begins with the moody notes of low-slung strings and the gradual layering of rumbling drums, a wash of ambient sound, and the glimmering reverberations of a sinuous, soulful, and somber lead. As the guitar soars, the music swells in magnificent sound, still lined with melancholy but manifesting an aspect of majesty. The music’s urgency surges when the band introduce a jabbing riff, a darting lead, and the hammering of drums. The lead becomes a fantastic solo, in front of waves of searing fretwork. Accompanied by blasting snare-strikes, that central melody seems to become even more intense and anguished.

You’re more than three-and-a-half minutes into the song before the vocalist appears, in a harsh, growling fury. You continue to surf across the grim extravagance of the principal guitar and the gloomy whirr of the riffing, and even when the drummer locks into a less frenetic and more rocking rhythm, the guitar continues to send the spirit aloft, even as the vocalist howls like a wounded fighting beast.

The drums mount again toward another fusillade, furnishing the heated drive-train for another rise of anguished guitar expressiveness and another reverberating solo that flickers and rises like a column of whirling fire.

We premiered this next song, too. In fact we premiered a stream of the entire album. And to repeat what I wrote in the review accompanying the album stream:

“If you’re looking for titanically heavy music, the kind that will loosen your teeth and vibrate your spinal fluid, you’ve come to the right place. If you’re looking for music that glimmers and shimmers like the northern lights, you’ve also come to the right place. If you want the sounds of tension and pain, lead-weighted gloom and feverish desperation, mechanized warfare and sunrise grandeur, you’ll find that here as well — plus a steady dose of what makes people compulsively bob their heads.”

Hegemone’s album, We Disappear, completely won me over, but maybe because the following track is the first one I really concentrated on for that first song premiere, it still sticks in my head more than others.There’s such a potent rhythmic drive to “Π“, like a big powerful engine with pistons hammering, and all that robust torque propelling a heavy machine forward in a way that elevates the pulse rate. We’re the passengers, carried along but also wanting to move our heads like pistons too, locked into the movements of this gear-shifting juggernaut as it eats up the pavement.

The heavy, sludgy bass lines and magnetic drum rhythms set up a syncopated cadence that seems a kindred spirit to post-punk, but the band also punch the accelerator, launching the music ahead in blast-beat-driven surges. And as the rhythm section carries the listener along, helpless to resist, the strummed chords and swarming fretwork magnify the music’s magnetic appeal, and its bursts of intensity.

Eerie, swirling and soaring keyboard melodies and chiming guitar notes give the music a spooky ambience; dissonant guitar emissions give it an air of incipient derangement; flesh-stripping shrieks and hoarse, heartless howls add the fuel of fury to the song’s propulsion.

You can pick out elements of black metal, post-metal, post-punk, and sludge in the song (among others), and Hegemone harness them together in a way that seems natural, heavy, and hypnotic.