Sweden’s Horndal are one of the new bands whose music I discovered yesterday. With a backbone of heavy hardcore and an anthemic dramatic quality, their debut album Remains was inspired as a way of memorializing and protesting the implosion of their hometown of Horndal, a small industrial center that was gutted during the 1970s by the closure of a steel mill that had been the community’s lifeblood. Though I knew nothing of the band before yesterday, the official video for a song off the new album named “Wasteland” produced an immediately powerful reaction. 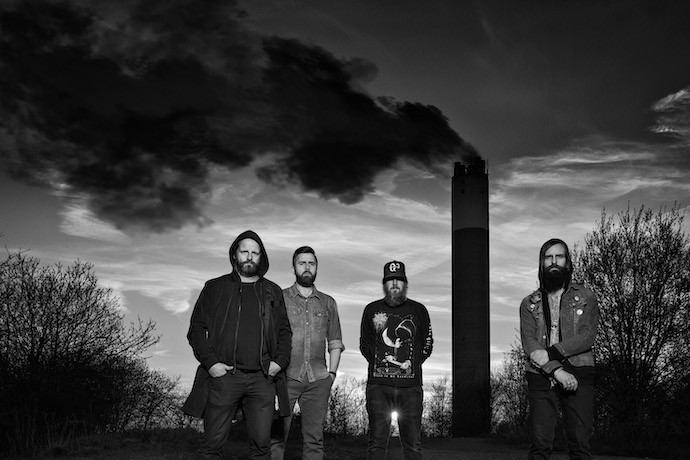 The closure of the Horndal mill was apparently traumatic, and the music in “Wasteland” is undeniably traumatic — granite-heavy, bleak, and bruising, with raw, scalding pain and fury in the vocals. But the music’s jolting/pulsing riffs and booming/battering rhythms are melded with vibrant melodic hooks and plenty of head-moving grooves. The combination is immensely appealing.

Remains will be released by Prosthetic Records on February 22nd. 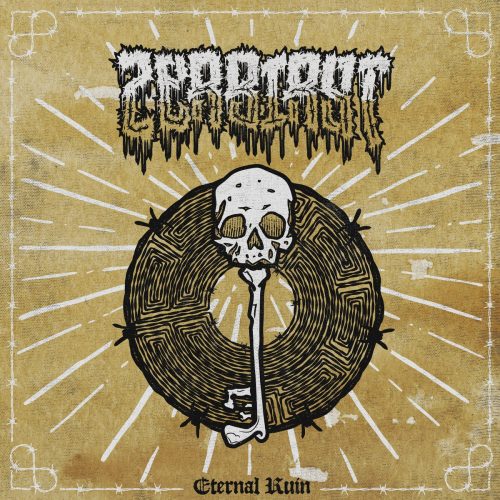 The German band Zerbirst is the second group in this collection that I knew something about before listening to the first two songs from their forthcoming debut EP, Eternal Ruin. Yes, it’s a debut release, but four of Zerbirst’s five members were also founding members of Vaulting, a band whose music I really enjoyed (and wrote about repeatedly) before Vaulting disbanded about a year and a half ago. With a new vocalist (John Morton), those ex-Vaulting musicians got back in harness, and Eternal Ruin represents the first fruits of their new ideas.

Those two tracks now up on Bandcamp, “Parasitic Construct” and “Eternal Ruin“, are genre-benders — a slaughtering phalanx of hardcore, death metal, and black metal. The turbocharged music is brutally punishing, thanks to titanic, bone-breaking grooves and attacks of rampant percussive battering and blasting and lead-weighted bass work; the riffs seethe scorch like flame-throwers; the vocals are screams of white-hot intensity.

Ruinous slaughtering, however, isn’t the only aspect of the music worth noting. These breathtaking onslaughts are rhythmically dynamic, technically sharp; and laced with evocative melodic textures (crazed braying notes in the first song, for example, and moody, melancholy accents in the title track, which also has a soaring, almost anthem-like quality in addition to burning like an out-of-control conflagration).

Eternal Ruin will be released on March 29th. 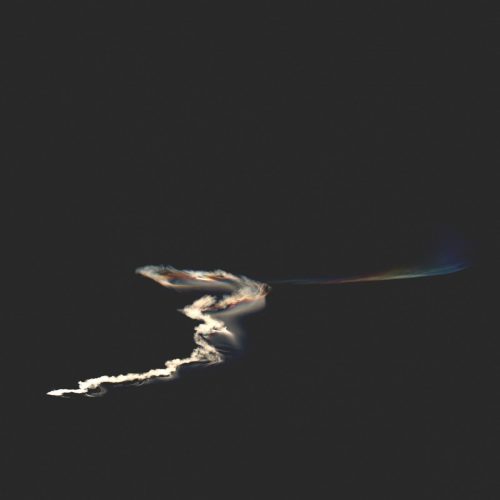 And now we come to the second band in this collection whose previous music I’ve enjoyed. In the case of INTRCPTR, a Los Angeles instrumental duo consisting of guitarist Ben Carr (5ive) and drummer Larry Herweg (Pelican, ex-Lair Of The Minotaur), it was their first EP, I, which was released in July of 2017 by Magic Bullet Records. Their latest effort is a two-song EP named II. One of the tracks premiered at DECIBEL, and the other at Revolver, and the EP became available through Bandcamp on January 31st.

I became so quickly addicted to these tracks that I was left shaking my head. The thick, fuzz-bombed riffs, psychedelic leads, and gut-punching drumwork are like some fast-acting drug that casts a complex spell, partly devoted to making your body shake like a rag doll and partly geared toward clouding your mind with a hallucinatory haze.

That haze becomes particularly poisonous and threatening in the first track (“Dusted“), though the wooziness in the second one (“D.I.W.I.W.Y.L.“) is plenty dark and daunting itself — except when the song locks into surges that almost overcome the spell with big shots of head-moving adrenaline or just pound the bejesus out of you.

Kyuss is still a valid reference point here, but you should still listen even if that comparison doesn’t make you excited. 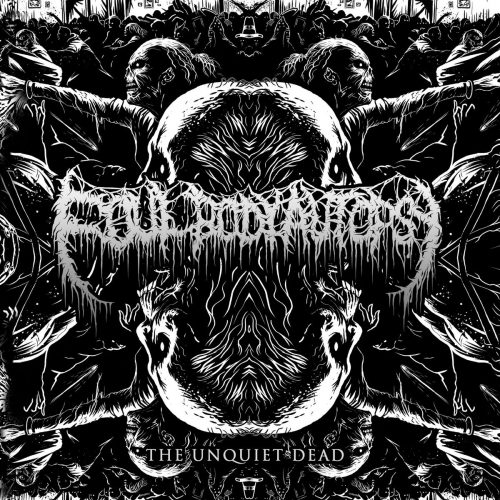 And now the third band whose previous music led me to explore what you’ll find below. In this case, it’s the UK one-man riff machine Foul Body Autopsy, who’ll be bringing us a new EP named The Unquiet Dead on March 6th.

Of the three tracks on the EP, “Consumed By Decay” is the one you can check out now. It’s an immediate sign, borne out by the other two tracks on the EP, that FBA creator Tom Reynolds has impressively expanded the breadth of his musical ideas. The song, which has a glorious beginning, quickly segues into a melodic death metal gallop, and the fast-darting and dreamily shining riffs and fanfare-like accents together give the music a heroic and almost mystical atmosphere. The shifting drum rhythms in the song and the fieriness and varying range of Reynolds‘ harsh vox make this pulse-pounding track even more dynamic.

From previously known quantities, I’m turning now to a new discovery (at least for me). Ceremony of Silence is a two-man outfit from Slovakia. Their debut album, Oútis, will be released by Willowtip Records on April 5th. The identity of the releasing label, coupled with the allure of the album’s cover art (created by the band’s drummer Svjatogor), are what led me to “Ceremony Of A Thousand Stars“, the first advance track (which premiered at DECIBEL). It’s so very good that I’ve prioritized listening to the rest of the album in the next few days.

The cavernous vocals here are the kind of monstrous and monotonous sounds that would be at home in the most abyssal and slogging forms of doom/death, but the surrounding instrumentation is a changing kaleidoscope of sound, the guitars veering from eerie and uneasy dissonance to flights of almost joyful exuberance as well as light-fingered manifestations of dangerous lunacy, the nimble bass work sounding both moody and mad, the drumming a kaleidoscopic performance all by itself.

And so, although there are certainly aspects of the song that are atmospherically oppressive, the lasting impression is one of exravagant (yet cohesive) compositional inventiveness and eye-popping technical skill. It seems quite evident already that Willowtip has another winner on its hands. 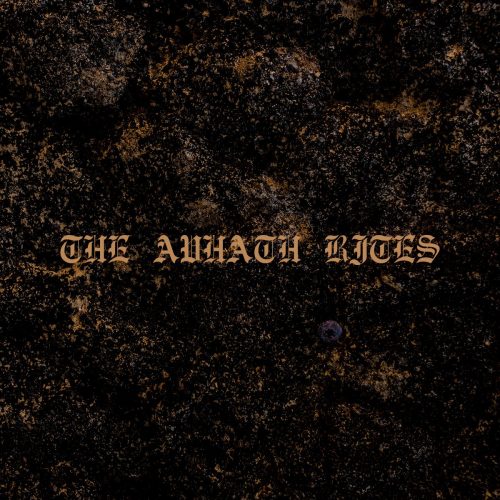 And the last newcomer in this collection is the Indonesian band Avhath, but a newcomer only because I overlooked the e-mail they sent us almost three years ago with an invitation to listen to their EP, Hymns. I might have also overlooked their new EP, The Avhath Rites (released on February 1st) were it not for a recommendation by Rennie (starkweather), who characterized the music as “real caustic blackened hardcore from Indonesia — pure filth”. But don’t get the wrong idea from those words, there’s a hell of a lot more going on here.

You probably won’t think the music is filthy based on the grim and haunting instrumental that opens “Abhorrent Display”, or by the dismal chords and merciless pounding that follow. Except for the flickering lead that rises up, it’s almost spellbinding. However, there’s a burst of hardcore rampaging ahead of you, and the first appearance of the truly mind-melting black-metal vocal extremity that you’ll encounter throughout the rest of this trip.

That first track is a big signpost which declares that The Avhath Rites isn’t going to be a straight-forward, easily predictable musical excursion — and it isn’t, and it’s all the better for that. Yes, the band are certainly capable of spewing caustic acid into the ear canals, and of beating a listener black and blue, but they’re just as capable of creating chilling drafts on the back of your neck, dragging you through troughs of misery, raising visions of grandeur (both infernally ominous and gloriously inspiring), evoking feelings of wistful melancholy, and wildly rocketing you forward with furious drum blasting and racing tremolo chords.

Not only is the EP as a whole difficult to pin down, there are changes aplenty within each track (and the degree of abrasion coating the vibrating strings is mild enough that all the instruments stand out). The first time through, I quickly found myself eager to discover what would happen next, and was left wishing for more minutes at the end (even though the doomed pounding and anguish-ridden extended solo at the end of “Destination: Perdition” is pure apocalyptic desolation).

In short, the whole EP is a multifaceted, genre-bending gem.