What a very nice coincidence. Almost exactly one year ago we were anointing a song from this Swedish band’s debut album (In A Pitch Black Grave) as one of 2017’s Most Infectious Extreme Metal Songs, and a year and a day after that event they released the first single from their second album. And damned if it isn’t already a contender for the 2019 edition of that list. 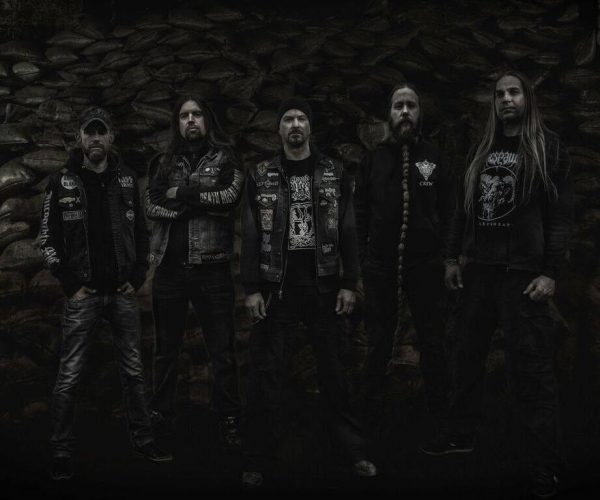 Obviously, these are people who know what they’re doing, and what they’re doing smells strongly of death (metal). In fact, their new album is named Smells of Death. The first preview song from that album, “From The Inside They Came“, is like death metal soul food — traditional, no-frills Swedish nourishment prepared by skilled hands that warms savage hearts (and causes salivation among the old-school faithful).

This new track is a massive, slaughtering attack — massive in the tone of those delicious chainsawing riffs, massive in the thundering destructive power of the drumming and the heavyweight thrum of the bass, and massive in its power to make your head pump like a piston. Pettersson‘s vocals are predictably predatory, and the wisps of eerie melody in the music make it even more alluring.

Smells of Death features lovely cover art by Patrik Tegnander (Chainsaw Design), and it will be released on April 19th by Soulseller Records in CD, vinyl, and digital versions.

TRACK LIST:
Smells Of Death
They Crawl
From The Inside They Came
In The Pit We Shall Gather
The Process Of Death
Dead And Buried
The Dead Laughed
Birth Of Insanity
The Curse Of Matul 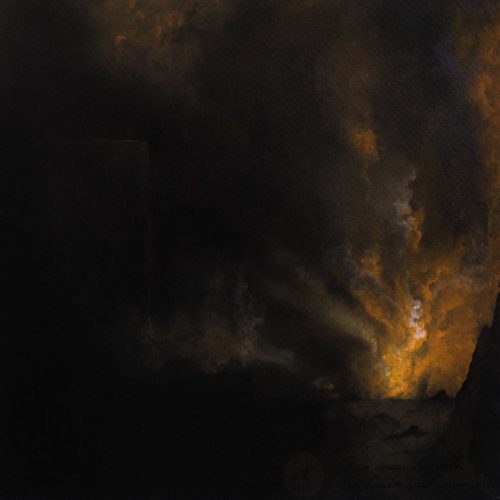 Last fall the multinational group Kāla (named for the manifestation of the Hindu Godhead as death, the great destroyer) made a striking impression with their first demo, a four-track, genre-bending experience named Shavasana (which I attempted to describe in a review  here). Just days ago they released for streaming a new split with the Swedish black metal band Samhara (whose debut album Deathkult Sutra was released in 2015). Kāla introduced the split in this way:

“As our promised release The Consecrating Rite Of Pavamāna comes to its appearance day, we honor the perished who died in our terrifying multi-armed Lord. They roam the abyssal cremation grounds endlessly in vesture of their immortal spirit, across mother Ganga. They who have valiantly performed traditional spiritual suicide. In their name, our second act is manifest: Nava Khanda.”

The split begins with an introductory composition (“Nava Khanda“), which provides a chilling mood-setter for Kāla‘s song, “Descent Unto Andhatāmisra“. Laced with wraithlike Indian melody, it’s a brooding, ominous, and fearsome amalgam of death and black metal — night-dark and mysterious, mountainously heavy and cruel, mesmerizing and mortifying. The harsh vocals are skin-shivering in their wild intensity, while the chanted words enhance the music’s aura of spiritual eminence. It does indeed sound like a hymn to Death.

Samhara‘s track, “Pratyahara“, is apocalyptically ominous at first, and apocalyptically doomed as well. The deep, distorted tone of the riffing is heavy enough to vibrate the spine, providing a contrast with the sharp crack of the snare and the anguished frenzies and wails of the lead guitar. While the scalding vocals convey vicious vehemence and shattering pain, the melody is dismal and dire, yet also has a beseeching quality, a memorable melancholy. 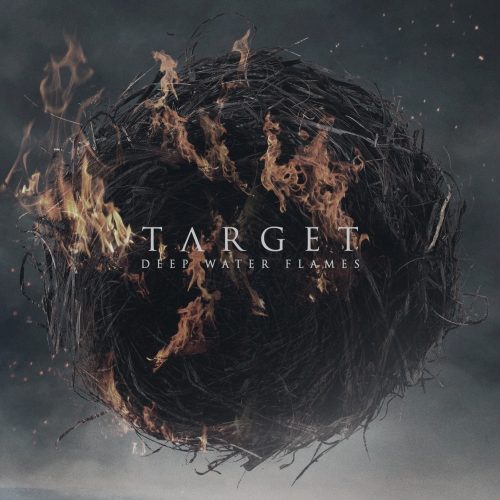 “Target is outrageously talented. Top notch musicianship”. With those words, Rennie from starkweather urged me to listed to the debut album of the Chilean band Target. He was more expansive on starkweather’s Facebook page (which is an excellent thing to follow if you’re looking for astute recommendations of new music):

“Target have a mammoth release with Deep Water Fire on hand. Prog tech in the vein of Theory in Practice, Scarve, Martyr and a touch of Cynic and Gojira. Very energetic with great melodic moments offsetting the aggression. Drum performance stands out for me – an absolute clinic during ‘No Solace Arises.’ The other musicians are no slouches either with dextrous interplay, compositions, and the riffing is no joke. Vocals are strong and varied. This will no doubt be a year-end contender. It’s that good.”

And man, it really is that good. Deep Water Fire is an enormous surprise, almost as astonishing as the blaze of a meteor rocketing in from the clear blue sky, or perhaps like the appearance of  extravagant flames in deep water. My NCS comrade TheMadIsraeli also made a strong recommendation of the album, likening the music to that of Hacride. And while we’re all dropping names of references, I also had flashes of Meshuggah, The Ocean, and even Devin Townsend, in addition to the others mentioned by those two recommenders.

I’ll second the observation that the drumming is remarkably creative and technically impressive, seizing attention from its first appearance and holding attention all the way through. There’s equal high-voltage electricity in the other sharply executed performances, and in the band’s rampant dynamism, displaying a knack for changing course in dramatic yet organic ways. The songs are explosive and vicious, and titanically groove-some, but also regularly become brooding, beautiful, beguiling, and eerily ethereal. Determined bruisers, Target are also extravagant mind-benders and mood-changers.

There’s dynamism in the vocals, too, which range from blood-freezing shrieks and throat-lacerating yells to moody, soulful cleans. Even the instrumental intro and the well-placed atmospheric interlude at the mid-point are beautifully conceived and mesmerizing in their effect.

Deep Water Fire was produced by Target guitarist Luis Soto and by Erick Martinez in Santiago de Chile. The mastering was performed by the great Jens Bogren at Fascination Street Studios in Stockholm. The cover art was created by Dehn Sora, whose name will be very familiar to our regular readers.

Deep Water Flames was released on January 21st. It’s available for streaming on Spotify (here) and Apple Music, and I found a digital download of the album at Amazon’s U.S. site (here). CDs and vinyl are supposedly coming via Australis Records, but I haven’t seen any details for that. And to paraphrase Napalm Death, No Bandcamp but why?

UPDATE: Now the album IS available on Bandcamp! (Thanks to Talvalin for letting us know.)

I’ve praised the music of this Finnish black metal band a couple of times in the past, most recently last fall, when I discovered a demo version of a thrilling song named “Loputon Viha“ that’s destined to appear on the band’s third album. Thanks to a tip from my Norwegian friend eiterorm, I learned that on January 31st the band began streaming the title track to that album, which is named Kuolonkylväjä.

Sielunvihollinen have already demonstrated a multitude of talents. Chief among those talents, as displayed here, are the ability to kick up rollicking, powerfully head-moving romps, and to stitch vibrant melodic hooks into their high-powered songs. The vocal snarling, screaming, and roaring are in Finnish, and to outlander ears, it makes them sound even more vicious and unhinged. The soloing is beautiful, and the song soars gloriously even as it fights like a back-alley brawler.

Kuolonkylväjä will be released at some point later this year by Hammer of Hate; the cover artwork is by Maxime Taccardi.

For reasons I don’t comprehend, the band have disabled the ability to embed the YouTube stream at sites like ours, so you’ll have to go here to listen: 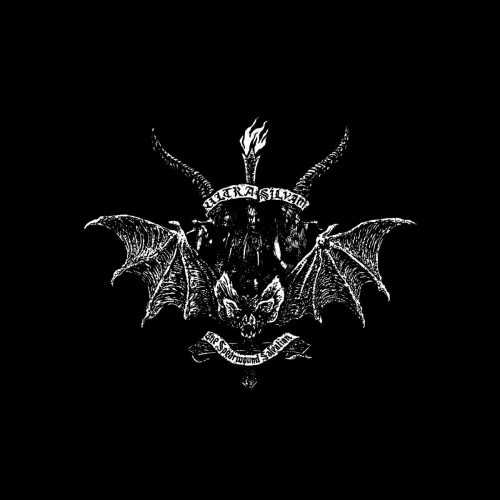 To close Part 1 of this collection I’ve got an electrifying track named “Birth of a Mountain” by the Swedish black metal trio Ultra Silvam (from Malmö). It’s off their forthcoming debut album The Spearwound Salvation, which follows a 2017 self-titled demo.

You know how mountains are born, right? Mainly through the crashing together of tectonic plates, and by vulcanism. The processes at work in this new single sound much more like the latter process. It’s a superheated eruption of molten fury and boiling chaos. But as fiercely as the song rips — and the maniacal drumming, freakishly blistering leads, and unhinged vocals really do rip — it’s the magnetic riffing, remarkable soloing, and head-hooking melodies that really make the song stand out. It’s like an incandescent amalgam of throat-slitting black metal savagery, arena-ready rock, and “classic” heavy metal, with a clarity of sound that’s fitting.

The Spearwound Salvation will be released by Shadow Records in cooperation with Regain Records on March 22nd. You can order it on CD, LP, and cassette tape.