(This is Vonlughlio’s review of the new album by the Japanese band Desecravity, recently released by Willowtip Records.)

It’s been quite a bit since my last small review here at NCS. Nonetheless, I now have the opportunity to write about one of my favorite acts from Japan. That band is Desecravity, and they released their third album entitled Anathema via Willowtip Records this past 25th of January.

This band was formed back in 2007 but it was not until 2012 that they released their debut effort, Implicit Obedience. I was fortunate to discover that release the same year thanks to a review that popped up in my newsfeed (my apologies, I don’t recall from where), and the cover art and name caught my attention. 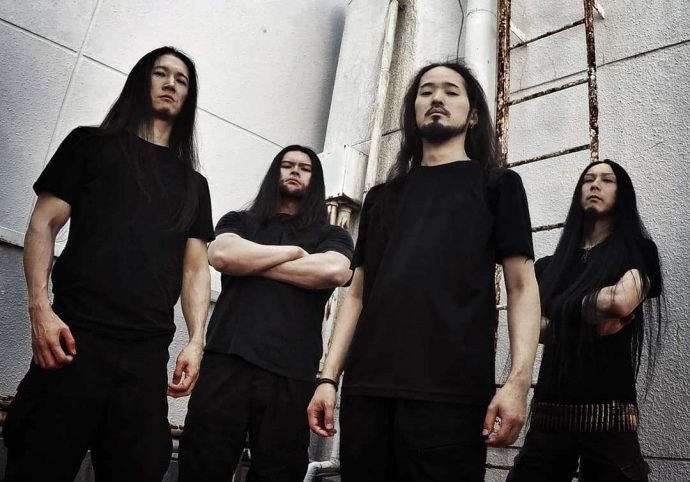 So after listening to the debut, right then I became a fan of their music. It was a fine example of BDM with Technical  influences that fit perfectly into 8 songs (minus the intro). It gained them a large fanbase, and some comparisons to Cryptopsy’s early sound (about which I have some mixed opinions).  Regardless, it was a very straightforward record with complex time changes and song structures, performed with speed and precision.

After 2 years they released their sophomore effort, Orphic Signs. For me it showcased their musical abilities even more and expanded their sound further, while maintaining the original elements from their first album. It was not as fast and in-your-face as its predecessor, but it was vicious and the execution in each of the songs was merciless.

The intermingling of melodies with the BDM/Tech delivery made it even made complex. These musicians knew what they wanted, and the best part was that they put their ideas into the songs in a way that would make you think, are they human?? This album has a special place in my heart to this day, and at that point it became clear this band would be among my favorites from Japan, and I hoped for more recognition for their work.

After two years I was expecting a new release, but nothing arrived, and I was afraid the band was done — but nope, this year we got their new opus, Anathema, with a cover that suits the album title. That’s another thing about them — the album titles and cover art are spot-on and match the songs as well.

As I said, these guys think about everything. The first single got me excited, so I ordered the album, and when the release date came, OHHHHH BOY!!!!!!!! I love the album from start to finish. It’s true to their sound, but it’s also different from their previous work. There are more melodies in the songs, yet they’ve maintained their core sound with the fast and precise delivery that fans like me feel in love with.

One thing that all their releases have in common is that they are in the low 30 minutes of run-time, and that is a perfect range for their songs. It keeps one engaged, and before you know it, it’s time to start again (that’s how good their music is).  The production is natural and so fitting that you can listen to all the instruments and how they interact with each other.

Another element that stands out is the prominence of the bass, and the fact that it has its own solo moments in some sections of the songs, which was a great touch and for me made that element the unsung hero. Another favorite aspect, of this and all three albums, is the utmost precision of the drumming, while the guitars and vocals are so addictive — top-notch, and an integral part what makes the eight chapters of this story so excellent.