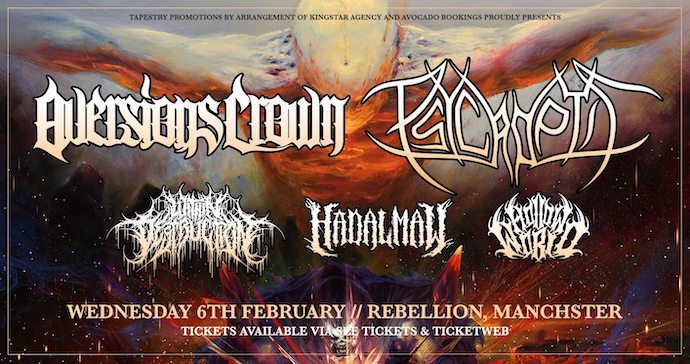 Well, for tonight’s show, featuring four Australian acts and one Slovenian group, I had to contend with both, making a five-hour round trip and sitting through a couple of less than stellar performances, just for the opportunity to see Hadal Maw live for the first time (although, let’s be honest, I doubt I’ll ever turn down an opportunity to catch Psycroptic either). 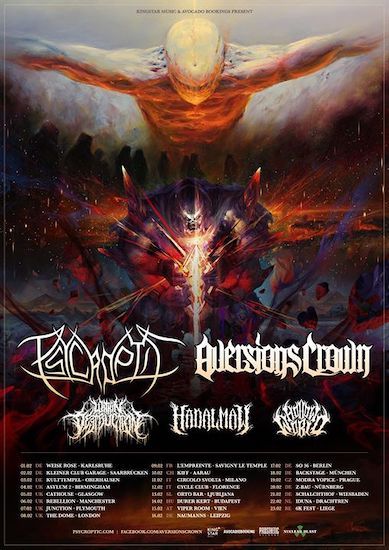 Openers Hollow World got the evening off to an early start with their solid, if not spectacular, high-speed Black Dahlia-core, treating the small but appreciative crowd to a red-hot, rapid-fire run-through of material drawn primarily from their 2017 album, Exanimate.

And while the band’s sound was occasionally a little thin, and the drums were FAR too triggered for my liking, they were definitely a good choice for an opener, giving the audience something new, yet still very familiar, to get them warmed up.

While speaking to Hadal Maw vocalist Sam Dillon before the show he revealed to me that, due to the rotating nature of the bill, sometimes it was them opening, other times it was their brothers in Hollow World, and that in the former case it often felt like a bit of an uphill struggle to get the crowd to warm to them that early on, as – and I don’t think anyone on the bill would argue with this assertion – HM’s sound is easily the most complex and demanding of all five bands, eschewing the hooky immediacy of their peers in favour of a much more dissonant and slow-burning approach.

You could see this at the start of their set tonight too, as it definitely took a good proportion of the slowly-swelling crowd a little while before they finally started to get into things, but thankfully that didn’t stop the band (or their wiry frontman) from putting on an extremely impressive (and surprisingly expressive) performance – focussing largely on 2017’s Olm and last year’s Charlatan EP – that would ultimately prove to be significantly heavier, and more organic, in sound than the rest of the night’s bill.

Ironically, for a band so proudly displaying the words “TRUE SLAM” on their stage banners, very little of Slovenian quartet Within Destruction’s live show comes across as real, as so much of their sound is on the backing track, and their drums are so excessively triggered, that their entire set felt more like an edition of “Deathcore karaoke” than an actual performance by an actual band.

Granted, the group were much more enthusiastic this time around than the last time I saw them, and the pit-ninjas were clearly enjoying themselves a lot, but whereas their music can be an enjoyable slab of stupidity on record, live the repetitive, lowest-common-denominator nature of their material, coupled with the nagging sensation that 90% of what I was hearing was pre-recorded, just felt a little bit embarrassing.

As if sharing a rotating co-headlining slot with Psycroptic wasn’t enough pressure to deal with, Aussie Deathcore titans Aversion’s Crown have also been dealing with some sudden and precipitous line-up issues in the immediate run-up to this tour, forcing them to hit the road not only down a guitarist from their usual three, but also with a last-minute fill-in vocalist to boot!

And while this obviously meant that the band didn’t quite have their usual mojo with them this evening, it’s a testament to their “never say die, no fucks given” attitude that they still put on a pretty damn good performance in the face of this adversity.

Granted, their signature shtick – layering spacey, effects-drenched leads over chunky, chug-heavy breakdown riffs – does get a little bit predictable at times, but when all is said and done you can’t deny that these guys have found themselves a style and a sound that really works for both them and their audience, and you could never accuse them of doing things by half-measures!

Predictably, however, it was the night’s final band, the ever-reliable, always exceptional, Psycroptic, who stole the show… although considering the Tasmanian quartet were tonight’s top-billed band, you might argue that weren’t stealing anything, just reminding everyone in attendance why they’re the top dogs!

As always, the ridiculous tightness and relentless intensity of the group’s instrumental trio – Todd Stern (bass), Dave Haley (drums), and riff-master Joe Haley (guitars) – was ably augmented by the apoplectic aggression and barking belligerence of the band’s affable frontman Jason Peppiatt, who had the crowd eating out of the palm of his hand from the first track (a frantic rendition of “We Were The Keepers”) to the very last (a razor-sharp run-through of the title-track from last year’s fantastic As The Kingdom Drowns).

In between these two killer cuts the crowd were treated to a veritable masterclass in finger-shredding technicality and monstrous, muscular grooves, culled from the band’s last four albums.

And while the lack of anything from the pre-Ob[Servant] era might have disappointed a few committed old school purists, I defy anyone to question or criticise the sheer power and precision with which team Psycroptic deliver each and every one of their tracks, no matter what album they’re from.

So while the night as a whole might have been a bit of a mixed bag in terms of quality, I’m very glad I made the decision to make the trip to Manchester, as both Hadal Maw and Psycroptic were more than worth the price of admission on their own!