The looming approach of a massive new Ataraxie album should be enough to cause some fragile listeners to cower in fear, and even to lead stronger souls to gird their emotions for a catastrophic assault on all hope and joy, to prepare for total immersion in madness and pain.

Ataraxie’s world-view is implacably bleak, just as their music is unsparing in its daunting intensity. Almost five years ago, in the aftermath of Ataraxie’s last album (2013’s L’être et la nausée), the band’s vocalist/bassist Jonathan Théry told our interviewer (here): 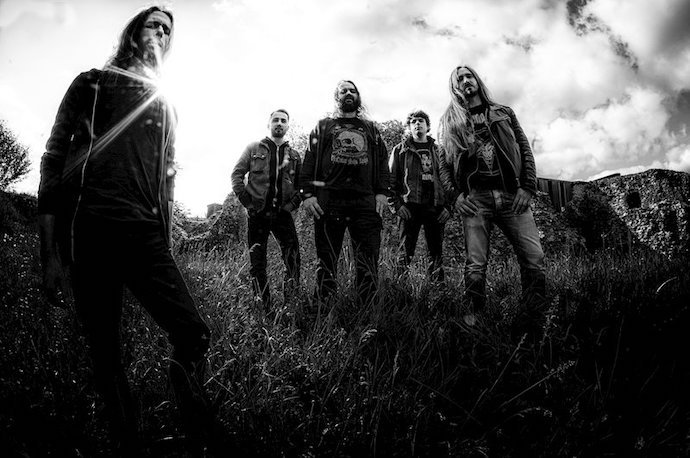 “To be honest, my views about mankind have remained the same for years now. You don’t have to know a lot about history to see that mankind is trapped in the same mid-term loops. It’s all cyclical. History repeats itself. And yet people will never learn any lessons from their past mistakes even if it leads to misery and demise. So they will always keep on running after (more) money and (more) power (the two most important values in our world), no matter what the consequences shall be”.

In the following years, there has been no radical revision of that outlook. The new album, Résignés, portrays “a world made of the madness of the masses, the morbid Human curiosity, its voyeurism and hunger for blood and a whole part of the society, hopeless and resigned to commit suicide before having to face an even more painful end, taking turns between the executioner’s hands, watching in delight the one before them dying while waiting for their own time to come.” And that is what Résignés is all about: “the resignation to death as the sole deliverance”.

And thus the album “deals with the global failure of a whole species chewing the rotten remains of the planet that once fed it, vowing itself to its own demise, wallowing in pathetic beliefs in a hallucinated salvation”. And yet, as Jonathan Théry also expressed in that previous interview, Ataraxie’s music doesn’t whine or weep over such a sorry state of affairs — it faces such cycles of deluded self-destruction with disgust, and “ready to fight like Conan did with Thulsa DOOM!”

The new album is indeed massive — more than 83 minutes of merciless doom/death spread across only four tracks. The opening track, “People Swarming, Evil Ruling“, is the one we present today, and at about 21 minutes it’s not the longest one.

The music is a stupefying experience, and genuinely (if perhaps paradoxically) merits the term “immersive” — no matter how oppressive that experience proves to be (and it will prove to be dreadfully oppressive for many listeners), its gravity is inescapable. Even light might seem bound to its black iron core. This painful music is so engrossing that the minutes pass in a way which creates the illusion of time hardly passing at all. 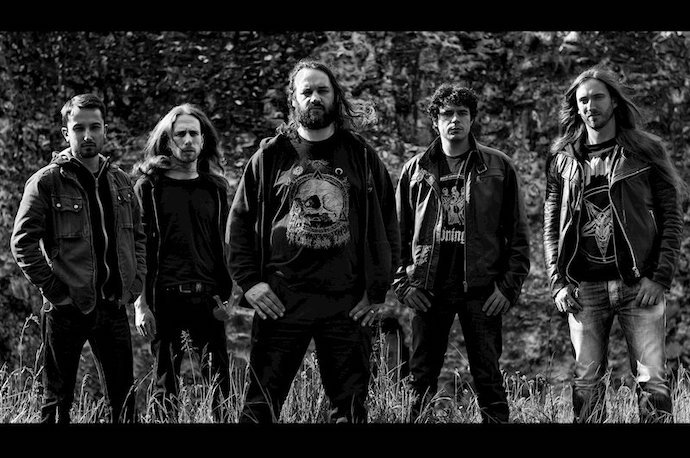 Wretched chords and pounding drums methodically measure out the tolling of inexorable doom, slow and massive. A guitar harmony of piercing agony spears out and subsides, reappears and moans, shimmers and burns. Gruesome and grated, a cavernous roaring voice is the first sign of something human, though only remnants of humanity seem to remain — enough to produce tremendously horrifying shrieks as well. The oppressive weight and remorseless, relentless power of the music is physically flattening, and opens veins in your emotional well-being, content to let the life slowly bleed out, doing nothing to stanch those wounds.

There are a few moments when crystalline notes echo out in isolation, creating a mood of haunting melancholy over cold gasping utterances and shattering cries. That doesn’t last long, though; soon enough, the music comes back searing, sending cascading waves of inconsolable agony to the cadence of another dirge-like drum march and screams of utter terror and incinerating pain.

The riffing begins to jab, the kick drums drive, the growling becomes adamant and vicious, and a cold drilling riff signals an onslaught of juggernaut destructiveness, a typhoon of battering percussion and the tremolo’d whir of rising and falling tones. When the pace subsides again, the music seems to soar in awful grandeur, assuming a mantle of terrible majesty, a looming monument of affliction that dwarfs all feeble human endeavors. Maddened cries, which seem like a final supplication to a heedless god, and stirring notes of inconsolable grief, boil from this immense manifestation of heartless darkness.

And then we’re back to a reprise of the staggering, pounding oppressiveness with which the song began — a final resignation to death.

And this is only the first of four songs, with an hour-long gauntlet of darkness still to come.

Résignés will be released on March 8 by XenoKorp on splatter vinyl in a double-LP edition, as well as on tape and digitally. CD editions will be released by Deadlight Entertainment in Europe and by Weird Truth Productions everywhere else. Pre-order via the links below — and prepare to meet your extreme doom.