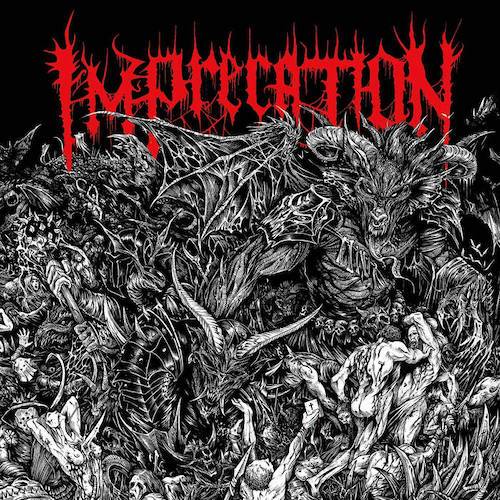 By chance, two of the new songs in this post are from albums slated for release by Dark Descent Records, and this is the first of those. This is also the first of two Texas bands in this playlist. The album is Damnatio Ad Bestias, the second full-length released by the venerable Texas band Imprecation since they rose from the dead in about 2009 after a long hiatus. 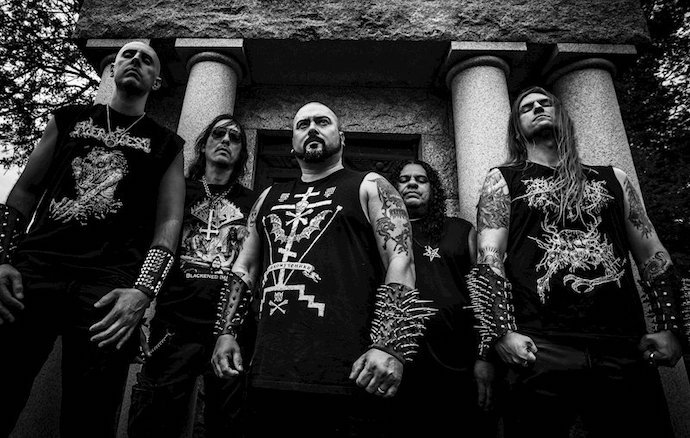 “Temple of the Foul Spirit” rumbles and roils like a toxic cauldron of lost souls in a slow boil over arcane heat, with a ghastly voice roaring incantations over rising sulphurous fumes. The band drag and lurch, stomp and crush, and eventually surge into a barbarous rush, cutting with cruel, fast-jabbing, near-atonal riffs and skull-hammering percussion, and drilling the brain with shrill, shrieking leads. It is indeed a musical temple of foul spirits — gruesome stuff, and quite invigorating.

Damnatio Ad Bestias will be released by Dark Descent on March 22nd. 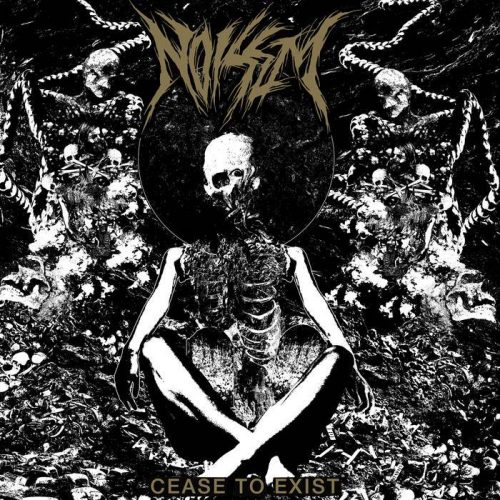 Imprecation have been around since before all the members of Noisem were born, but I guess that’s a meaningless observation. Even before now, this Baltimore band, who favor thrashing death/grind, already sounded like they had a couple decades of experience, and their new album won’t disabuse anyone of that conviction.

Whereas Imprecation‘s track was foul, Noisem‘s first one is filthy — “Filth and Stye” is its name — and rather than a gruesome slow-burn, the song is a rampaging wrecking machine right out of the gate, the kind of savage, supercharged attack guaranteed to stir up a frothy mosh pit. It’s over before you know it, stopping just short of one minute in length, but then you’ll get to hear “Eyes Pried Open“, which goes all the way to two minutes and a few seconds beyond.

That second track is also a blistering, brawling fury, with Ben Anft spitting the words in a rabid and rapid snarl. The band really pour it on near the end, thanks to a fret-melter of a solo and a dose of highly headbangable (and head-wrecking) groove.

The name of their third album is Cease To Exist, and 20 Buck Spin will release it on March 15th. 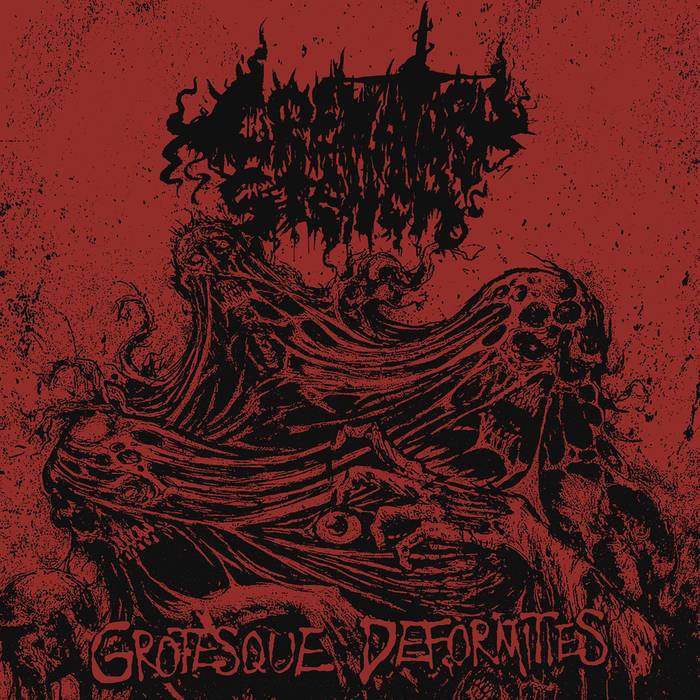 This next track just gets better and better as it goes along. It’s not that it starts slow either. In fact, Crematory Stench launch “Grotesque Deformities” in a maniacal attack of slaughtering mayhem, all rapidly clattering drums, gut-punching bass tones, rapidly writhing riffery, and wild, reverb-ed vocal horror. But as exhilarating as that opening boil of filthy derangement is, the band crank the voltage even higher with a truly wild solo and an even more bone-breaking dose of demolition work to end the song.

The song is the title track to Grotesque Deformities, which is the second EP by this Southern California band. It will be released on February 15th by Blood Harvest Records. 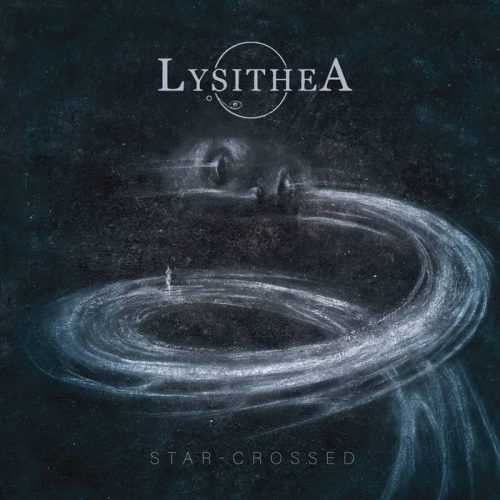 Even though those first three tracks may have gotten your blood boiling and left you sweating, with an evil leer on your face, we’re now making a hard turn into gloomier and more melodic environs, via a song of melodic death/doom from the fourth album by New Zealand’s Lysithea, The album’s name is Star-Crossed, and it will be released on February 22nd by Rain Without End Records.

“Unearthly Burial” is almost immediately mesmerizing, proceeding at a sedate pace as beautiful crystalline notes sparkle like star-shine in the midst of haunting gloom. As a heavy, head-moving rhythm section and pulsating guitar push the energy higher, a deep roaring voice enters the frame. There’s a sense of hopelessness in the music, and harrowing agony in the voice as it fractures in pain, but the unearthly, entrancing shine of the melodies remains, and the fluid, exotic leads and high, quavering keyboard chords only increase the song’s dark and mystical allure. 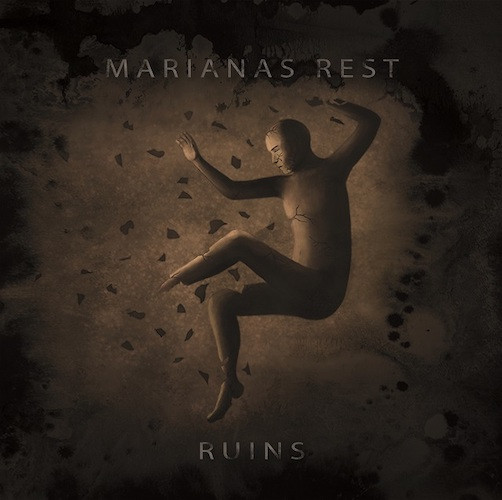 As a fan of this Finnish band’s 2016 debut album, Horror Vacui, I’ve been anxious for the arrival of a full-length follow-up, and it’s now on the way, with an April 26th release date scheduled by Inverse Records. These six men from  from the Baltic coastal town of Kotka have named their album Ruins; it was recored, mixed, and mastered by Teemu Aalto (Insomnium, Omnium Gatherum), and includes guest appearances by Insomnium’s Niilo Sevänen (reciting a poem by Lord Byron) and cellist Timo Virkkala.

According to the press sheets, “the album tells a story of how a mind slowly crumbles: about introversion, putting up mental walls and eventually disappearing inside your own head”. The song below, presented in video form, is “Restitution“.

Fragile piano notes and slow, plaintive violin strings quickly create a melodic motif, and then the full band pick it up and make it soar. A syncopated drum rhythm will get your head moving over long, dragging, gloomy chords as the vocalist vents his scarring intensity. A feeling of desolating loss floods the sound, but the gleaming melodies are so vibrant and yearning, and the dual-guitar leads so heart-felt and gorgeous, that you can’t help but feel inspired and impassioned. The music lifts into a glorious crescendo, and then leaves you in a wintry chill, replaying the music in your head.

With those interludes of beautiful, heavy gloominess behind us, it’s time to kill again.

I didn’t know much about this group before discovering the song below, but have since learned that the line-up includes current or former members of Imprecation (whose music launched this post), Blaspherian, Morbosidad, and PLF — and holy hell, those are some good names. The music is hellishly good thrash, too. It’s not a bunch of beered-up dudes wearing Converse All-Stars and gang-yelling like punks in the choruses. It’s more like sonic cannibalism.

The song is a full-throttle marauder, propelled by punishing yet high-flying drumwork and an array of riffs that are catchy as hell but also off-the-hook in their viciousness and grandiose in their air of imperious might. Searing, spider-fingered solos magnify the sense of infernal dominion after the song’s destructive frenzy segues into a slow, moaning calamity.

(We obviously don’t have the album art or I wouldn’t be settling for that logo up there, nor have I discovered a release date for the album. All will come in due time.)