(Wil Cifer prepared this review of the new album by Pensées Nocturnes, which was released on February 1st by Les Acteurs de L’Ombre Productions.)

This French band’s last album was an eccentric mix of black metal and chaotic cabaret jazz. This time they are fully committing to a Circus theme. Seeing this report, I assumed this album was bound to sound like Mr. Bungle. In some ways, they don’t prove me wrong.

Where Mr. Bungle hinged heavily on the vocal power of Mike Patton, these guys instead invest more in setting the stage of a place back in time. The vocals are more of a chattering narrative and swing back and forth from operatic singing to growls of anguish. Blast beats are thrown in, against a sway of an angular waltz. This time around the sounds are more layered. It is this layering that paints the exotic sonic pictures. 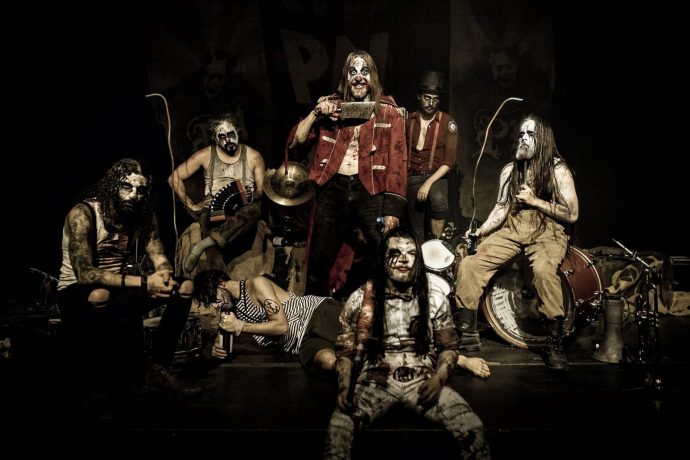 This is progressive metal that goes somewhere, rather than being a shred fest.Where they go can change from moment to moment. “Poll De Lune” has more dance to its wacky spasm, then they conjure a polka feel within “La’Alpha Mal”. The vocals take on more of a crazy bellow, like drunken were-apes are howling in a bar. This album finds the vocals are more tormented here, but also explores more colors.

The band add a blasty edge and maintain the crazy for “Les Valseuses”. The Ringleader welcomes the ladies and gentlemen before going into more of a death metal growl. This growl doesn’t last long. There is a wide variety of squawking afterwards. This might be the most circus-like of all the songs. It is at this point in the album that all of these sounds begin to taunt you with similar shades of the same crazy. It does break down into percussive clutter, which is different for the album thus far.

The song after, “Gauloises ou Gitanes?”, is darker and has more of a drunken ragtime feel. It does accelerate into blast beats by the end. “Comptine a Boire” sounds like someone took a bunch of acid on Bourbon street and had a nervous breakdown. Often metal is heavy because of how hard the guitars are hitting and the power of the overall sound. These guys have used chaos to create heaviness in their manic brand of lunacy.

“Anis Maudit” is more angular and dissonant. When it speeds up into a depraved gypsy Opera it just seems like the next logical progression.The bass player can finally be heard in the breakdown and he is fucking good.

These guys might not flex the guitar heroics of a band like Sigh, who dabble in similar realms, but they are great composers, as a lot is going on here. They are less focused in the closing song, “Triste Sade”. Two minutes in, I was wondering when this would converge into something that would actually make sense. The guitar rides the line between Klezmer and black metal. The trumpets help break the sonics up.

They have succeeded in an ambitious concept, almost more prog weirdness than black metal. This album is an escape into a crazy world of their own creation and a refreshing break from the stereotypical blast-beaten assault of most black metal.