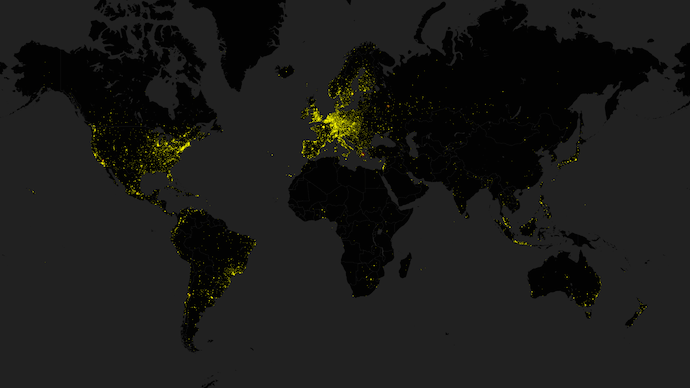 (The following article was written by Tør, a self-professed metalhead, data nerd, and ex-academic, who is also a contributing writer and photographer for a number of online metal publications. The article, and the accompanying interactive maps, are based on his work on a Ph.D. doctoral dissertation.)

Metal historians and researchers often explain the proliferation of metal music in terms of early tape-trading and local scene formation. The story is a familiar one: a small group of young metalheads get together and listen to a few tapes, trade tapes with other metalheads, and get inspired to make their own music. Indeed, the early spread of metal music and culture occurred in large part due to the human networks formed by individuals in local scenes. However, there is an emerging debate about the way in which metal has spread across the globe and what that process entails in the digital age.

When metal historians speak about the proliferation of metal music, they are often referring to the popularization of the genre as an art form by the fans. In fact, most sociological and ethnomusicological research has paid great attention to the globalization of metal from its origins in the UK and USA to other parts of Europe, South America, and Asia. Today, there are a number of bands emerging in places like Botswana and South Africa as a direct result of this globalization. Previous research has illustrated the extent to which new media and digital capacities (i.e., the internet) have taken over the role of early tape-trading through snail mail. In other words, metal has, for the most part, spread around the globe through consumer networks via websites like The Metal Archives, online blogs, YouTube, and other forms of globalized communication networks created by volunteers and scene insiders.

Yet, much of my research has focused on the more elusive side of this proliferation: globalization of the production dynamics of metal music. That is, the networks between the actors who produce (as opposed to consume) metal music. While there are many actors in the production network (one can name band managers, label executives, professional reviewers, tour managers, and venue owners), the two most visible ones are the bands and labels that co-create the aesthetic aspect of metal music.

Country ties in the production network of metal

While it can be beneficial to focus on individual bands and labels, I have found it more fruitful to focus on nations and the ties between them to fully understand how the production chain of metal music manifests itself geographically. How do those ties evolve over the years? The interactive animation below illustrates the extent of the cross-national pollination that has come to define the world of metal music (note: the points represent each country in their real geographical locations with Europe in the center and North America and Asia on the left and right respectively).

The second interactive map illustrates the extent to which metal production has spread across the globe in the last five decades. The highlighted parts correspond with a band’s city of origin (where data exist) at the aggregate level (note: (1) this map is not normalized for population and (2) there is some overlap in the way the cities are geocoded). The overall tale is a familiar one: the production dynamics of metal music are closely related to the global economy in that the core countries enjoy a leveraged position in relation to those in the periphery. Those with the strongest local scenes and institutions (i.e. labels and human capital) get their pick of the best bands to sign and promote while those in the periphery are actively engaged in local infrastructure and scene-building.

Aside from all the theoretical jargon, the illustrations below point to the global nature of the metal scene and cast doubt on notions of ethnocentricity and heritage that have gripped some corners of the scene for the better part of the last two decades.

4 Responses to “PROLIFERATION OF METAL ACROSS NATIONAL BOUNDARIES”