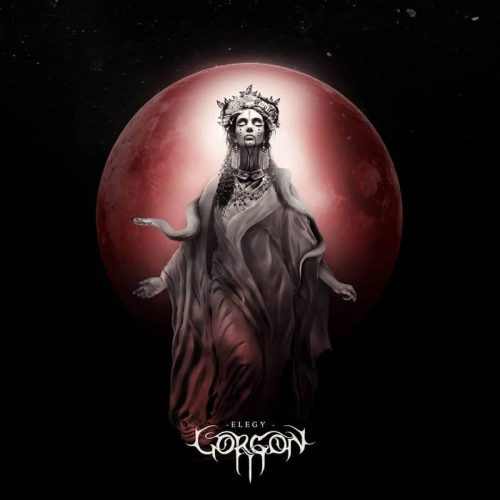 (This is DGR’s review of the new album by the French symphonic death metal band Gorgon, which was released by Dusktone on January 18, 2019.)

In the mental picture of our pretend NCS office that I keep in my head — when there isn’t somehow a gigantic fire in the corner that no one can explain — I often imagine the handful of us as having desks, as if we were respectable, upright citizens. So when I often say that a promo was “slid across my desk”, I’m projecting what I know of my fellow writers onto the surmised reasons why they may have sent a certain disc my way as they strolled by. This does happen, in the virtual world if not in a world of desks, as we are often determined to find music that we can share with each other, as well as all of you.

The arrival of France’s Gorgon and their latest album Elegy at the NCS office was one of those moments, where I felt as if I could sense the album slowly sliding my way, especially as more and more details of the group were revealed — as if it had become sentient itself and our meeting was an inevitability. 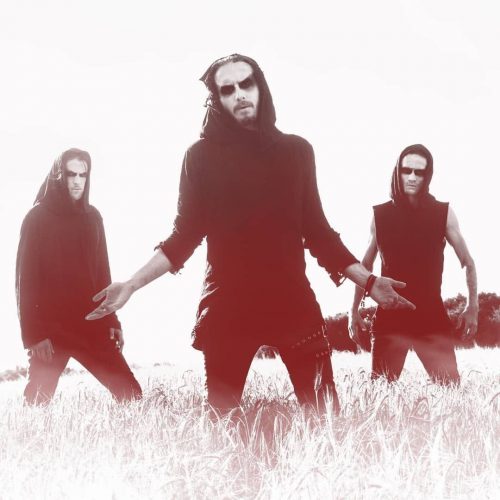 Big and ambitious album? Elegy inches ever closer in my direction. Heavy usage of symphonic elements and various ethnic instrumentation that runs alongside the aforementioned humongous near-blackened death metal sound? Gorgon’s sophomore full-length slowly inches further my way. All of this music densely packed into about forty-five minutes and spread across eight songs? At this point Elegy is plastered on my face as if it were a facehugger from the Alien franchise, in a blatant and rather forceful attempt to demand my time.

Thus, we find ourselves at the steps of Gorgon’s temple and their aforementioned newest album, the late-January release via Dusktone, Elegy.

It’s not difficult to discern the sound Gorgon are aiming for from moment one of Elegy; the aptly titled “Origins” lays out all the elements within the first forty seconds, the booming death metal quickly filling the song in, a hammering percussive section and multiple different symphonic elements working their way into the fray. The first few vocal assaults come from not only the band themselves but also a smaller backing choir in order to increase the scale of the sound.

Gorgon carve themselves a massive cavern of sound within the first few minutes of Elegy — fitting, given the cavernous and low mix given to the vocals, bringing the growled works all the way to the forefront and making them extensively loud — and then spend the album filling it in with every element the band could think of.

Elegy is one of those albums that tries to overwhelm the senses with its broad reach, and honestly, there are a couple moments within the middle of the album where songs reach such a crescendo that I thought the disc was closing out rather impactfully, only to have it continue on for two more songs. Of the eight tracks present on Elegy, five of them stay well within the high-five-minute to high-six-minute range. The only ones that don’t are that intro track “Origins”, the song “Ishassara”, and the instrumental closer, which also provides the album’s name. Each of those songs is about as large and expansive as the album’s opening number, so if it isn’t clear by then that Gorgon have set upon a journey with this disc, by statistics alone, two more songs should start making that picture very clear.

Elegy promises a lot in its opening songs, invoking spirits, mythology, and the sense that the band are performing inside massive temples. Gorgon’s orchestral backing splits itself between the bombastic symphonic work that metal has become accustomed to and various kinds of regional instrumentation, giving credence to the fact that the band’s name comes from Greek mythology. Songs like “Under A Bleeding Moon” and “Nemesis” are massive tracks, filled with a multitude of headbanging grooves and humongous, open-air segments of choirs and various symphonic stings to provide melody while the band push forward with a caveman’s blastbeat approach to rhythm. But, they also stand on their own, two very distinct events in an album that is tied together thematically but also by various instrumental refrains that are constantly threaded throughout the album.

Then you hit the mid-point of Elegy and the disc begins to shine. The grouping of “The Plagues” and “Into The Abyss” have Elegy firing on all cylinders, a hefty thirteen-minute chunk of the album that is cinematic in scope. The pair do a fantastic job of blending into each other, as well as bringing all the differing elements of Elegy into play. Maybe it’s the fact that I’m a huge fan of the brass section, but the big, war-horn like stings that pop up during the two songs, as well as the more bombastic and hammering nature of them, make this mid-point of the album into a highlight. “Into The Abyss” also features a fantastic opening lead melody that seems to tie its way around the entire song and quickly becomes an earworm in its own right. It is also one of the previously mentioned songs where I thought Elegy as a whole was closing out, simply because the final hammering rhythm is so climactic that the album just coming to a dead-stop then would’ve felt almost perfect.

As it stands, Elegy is a massive disc. The closing songs of the album will be familiar to those who might’ve been following Gorgon in the three years between their previous album Titanomachy and this one. Both “Ishassara” and “Of Divinity And Flesh” were released in advance of this album, and both continue the disc’s trend of massive songwriting, though to be honest,, after achieving such a massive peak with the previous pairing it feels like Elegy lets off the gas a bit in its final minutes.

Still, at over forty minutes of bludgeoning, Elegy tries its damndest to be as huge as Gorgon’s songwriting. They throw so much at the listener that at times it’s overwhelming, and often a little too easy to get lost within specific songs. The senses quickly become overpowered, and just a little too often, Elegy becomes a blur. Each song is written around a handful of standout moments, and the sheer amount of songwriting pyrotechnics on display is impressive, but it is the moments where everything really coalesces that Elegy achieves its full potential and becomes a thrill-ride worth headbanging along to.

It isn’t that difficult to find those moments on Elegy, but there’s something to be said about the amount of death metal empty-space that seems to pervade the album as a whole, where it really seems like despite as much as Gorgon have thrown at you, just a tiny bit more in different areas could’ve really pushed this album over the top. As it stands, Elegy is a great journey — but also one that you’ll know about halfway through the third song whether or not you want to undertake from beginning to end.

Even if you don’t, there are absolutely songs on this disc that could be recommended without a second thought. Which, in an odd way, I can’t help but feel slightly guilty for saying, because it feels like you should really be able to lock in for the whole ride with albums as massive as this. If you are like me, in the sense that you utterly adore orchestral bombast working its way through your heavy metal, then you do owe it to yourself to give Gorgon’s Elegy a close and complete look.