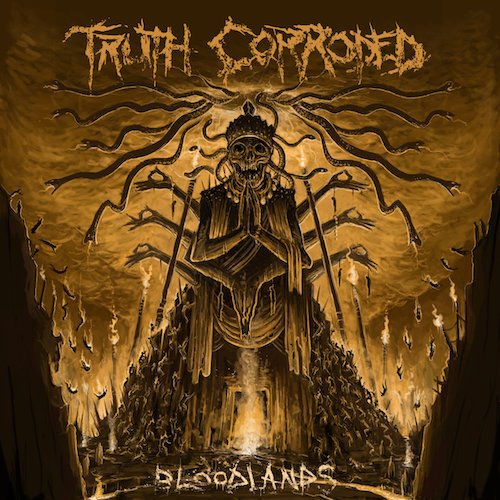 I wasn’t able to post any SEEN AND HEARD round-ups of new music last week, mainly because of a work-related trip to Texas from Wednesday through Friday that barely left me enough time to post what you saw on our site over those three days. I did continue to make lists of new things I wanted to check out as soon as I had time, and I found that time this morning, due in part to the fact that I woke up at fucking 3:45 a.m. I guess I was still on Texas time, but that can’t be the only reason. Maybe those lists were calling to me in my sleep like sirens.

Anyway, I went on a big metal binge this morning. It turned out that a lot of the new music I liked came packaged with music videos, which themselves ranged from decent to very good. So I decided to prepare a two-part round-up that consists entirely of videos. Part 2 will come tomorrow, in advance of the usual SHADES OF BLACK column (I’ve got a shitload of ideas for that, too).

I guess Australia must have its fair share of race-baiting right-wing political assholes, just like the U.S. does. That’s certainly the impression I get from the new video for a song by the Australian death/thrash band Truth Corroded called “Victims Left Lepers“, which includes the faces of certain political figures grotesquely morphing into Nazis and standard-bearers of the KKK. 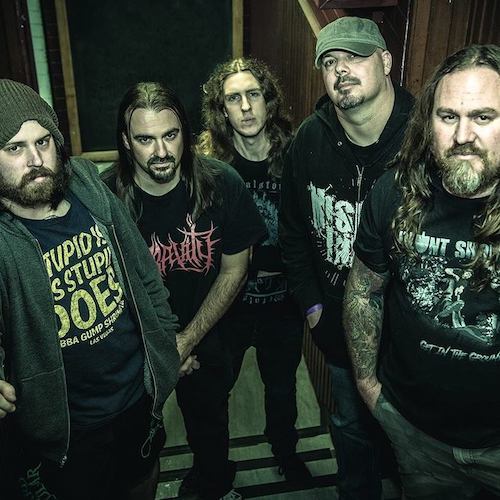 After watching the video by David Hall — which people at risk of epileptic seizures should not watch — I paid closer attention to the introduction at Exclaim!, where the video premiered. It included this statement by bassist and lyricist Greg Shaw:

“‘Victims Left Lepers‘ is a protest against the treatment of asylum seekers in offshore detention and the fear baiting and racist policy pursued by certain politicians for political gain. The clip challenges and ridicules these politicians and provides a historical context and contrast for their deplorable actions to be considered”.

This reminded me of a feature I coincidentally heard on public radio last week about the Nauru island detention camp, where the Australian government has been sending asylum seekers trying to reach Australia by boat, and keeping them there indefinitely. At one point the population of that inhospitable place included more than 100 children.

There’s obviously a lot of rage in the music, given the lyrical subject matter, and it’s hot enough to boil a listener’s blood, wholly apart from that subject matter. Vicious riffs that seethe and slug; drumming that flies like a jet and pounds like a jackhammer; incendiary vocals; bursts of savage, jolting groove; and bleak and bruising currents of melody — all these elements combine to create an experience that’s as addictive as it is electrifying.

“Victims Left Lepers” will appear on the album Bloodlands, which will be released by Unique Leader Records on March 22nd.

P.S. The album also features guest appearances by Stephen Carpenter of Deftones, Terrance Hobbs of Suffocation, Mark Kloeppel of Misery Index, and Ryan Knight (formerly of The Black Dahlia Murder). And there’s another song from the album that’s been out in the world a bit longer than the one in the video; I’ve included a stream of it below, too. 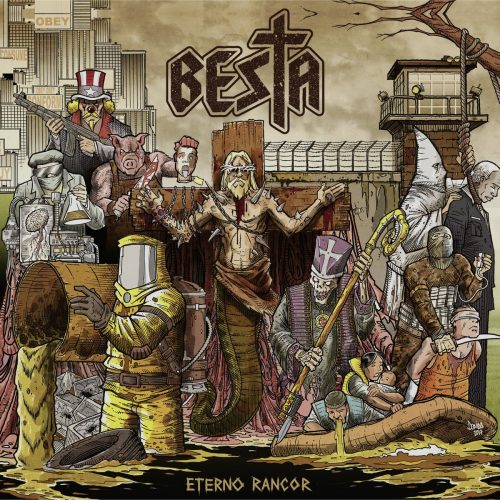 The next item, which I think makes a good follow-on to that Truth Corroded track, is a video for a song called “Ofício da Mentira” off the forthcoming second album Eterno Rancor by the Portuguese grindcore band Besta.

It doesn’t take long for this song to throw open the doors to a raging blast furnace and shove your head inside. Furiously pummeling drums and boiling, skittering guitars strike with violent force, but the song shifts gears repeatedly, launching into battering gallops, sending out gleaming shards of eerie melody, and eventually locking into a supremely headbang-able groove that will threaten the structural integrity of your skull.

The video, which captures the ferocious energy of the music, is quite cool, too. I especially enjoyed the interspersed flashes of the band’s frontman sitting calmly on a bench while his other self scorches our eardrums with his maniacal tirades.

Eterno Rancor will be released on March 15th by Lifeforce Records. I’ve included a second track from the album (“Azul, Vermelho e Branco“) along with the video for “Ofício da Mentira“. 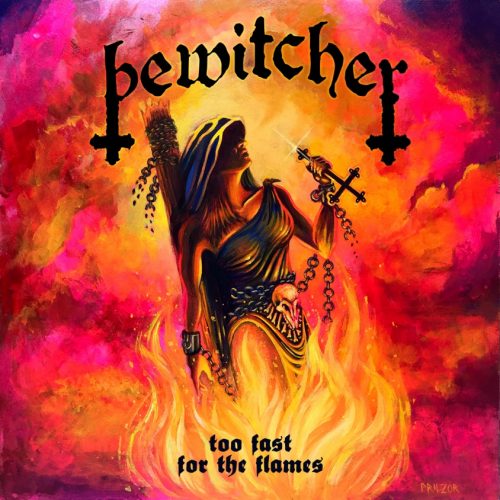 “Metal at the speed of Satan”. That’s the motto of Bewitcher, and it ain’t empty talk. I had the pleasure of premiering this Portland band’s self-titled debut album in 2016 (one of my favorite records that year), and I’m going to borrow some of my own words from that premiere just to set the stage for this next new single and video, in case you haven’t yet discovered what these dudes are up to:

Bewitcher seem to have discovered a hidden vault filled with pure riff gold. Every song on the album is packed with electrifying guitar work, blending thrash, speed metal, Motörhead-style rock, first-wave black metal, and even elements of the classic NWOBHM in a way that’s as infectious as a rampaging new plague virus without a cure.

The band move from mid-paced headbangers to blasts of white-hot hellfire with equal skill and explosive energy, augmenting their blood-pumping bursts of vehemence with skin-melting, head-spinning solos and gut-busting bass and drum work. Even when they slow the pace to a doomed stagger at the open and close of the last track, they display a sure mastery of their material.

As icing on this very addictive cake, you also get thoroughly nasty vocal mayhem that’s as caustic as acid spray and as vicious as a rabid wolf, plus production quality that gives the music both clarity and a heavyweight punch.

The new video is for a single aptly named “Too Fast For the Flames“, and it premiered at Revolver last week. If you’re old enough to remember the “Satanic Panic” of the mid-’80s, this video will make you smile. Regardless of your age, the music will set your hair on fire.

The single will be released on 7″ vinyl, with a B-side consisting of Bewitcher’s cover of “Show No Mercy” by W.A.S.P. It appears that Bewitcher will be releasing a second album via Shadow Kingdom Records in the not-too-distant future.

(Thanks to eiterorm for tipping me to this video before I saw the press release.) 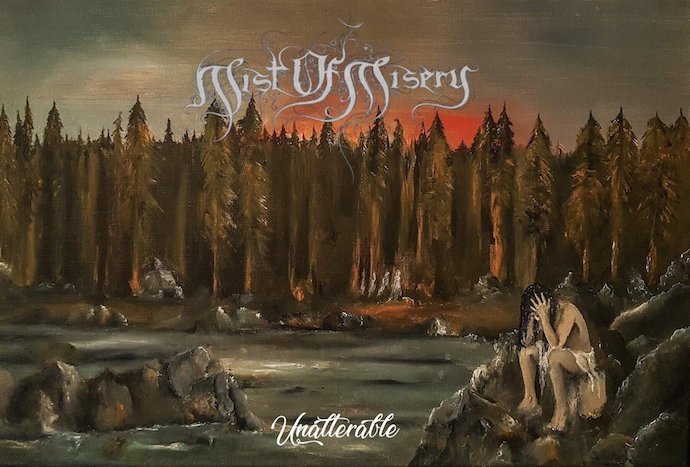 In January I had the pleasure of premiering an official video for the first-released song (“Halls of Emptiness“) off the massive new double-album, Unalterable, by the Swedish atmospheric black metal band Mist of Misery. Now, there’s a new video for another song from Unalterable, one entitled “Heir To Misfortune”.

As in the case of the video we premiered, this one also features footage of natural vistas that are breathtakingly beautiful, but also sometimes cold and desolate. The music is also beautiful in much the same way — the melody has panoramic sweep, yet is stricken with melancholy. It is somber and mystical, yet also fiery in its passion. And although the music is often downcast, it also shines and soars. “Enthralling” is perhaps the best single word for it.

Unalterable will be released as a double-CD by Black Lion Records on April 12th.