After releasing three really good demos starting in 2013, Portland, Oregon’s Bewitcher are now poised to release their self-titled debut album on August 18. It will be made available digitally via Bewitcher’s Bandcamp page and on LP through Diabolic Might Records, with a CD edition coming on September 9th from Divebomb Records — and today we give you the first chance to hear the entire album.

Bewitcher have been outspoken about their disdain for a lot of modern metal trends, and the fanatical zeal with which they embrace the hard-rocking, flame-throwing blasphemy of early ’80s devil music is on full display in this new album. 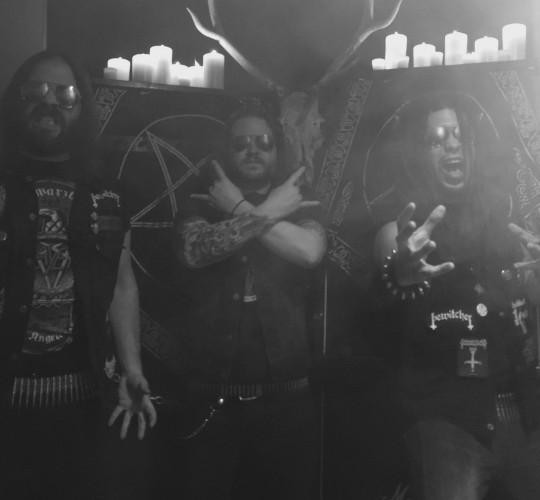 Bewitcher seem to have discovered a hidden vault filled with pure riff gold. Every song on the album is packed with electrifying guitar work, blending thrash, speed metal, Motörhead-style rock, first-wave black metal, and even elements of the classic NWOBHM in a way that’s as infectious as a rampaging new plague virus without a cure.

The band move from mid-paced headbangers to blasts of white-hot hellfire with equal skill and explosive energy, augmenting their blood-pumping bursts of vehemence with skin-melting, head-spinning solos and gut-busting bass and drum work. Even when they slow the pace to a doomed stagger at the open and close of the last track, they display a sure mastery of their material.

As icing on this very addictive cake, you also get thoroughly nasty vocal mayhem that’s as caustic as acid spray and as vicious as a rabid wolf, plus production quality that gives the music both clarity and a heavyweight punch.

There’s so much classic metal goodness on this album, performed with such eye-popping instrumental flair, that you could throw a dart at the track list and come up with a winner no matter where the needle lands. It’s the kind of music that’s made for working up a boozy sweat in a packed bar that’s coming apart at the seams with metal-charged mayhem — or just moshing with the furniture in the privacy of your own home. The one thing you really can’t do in listening to Bewitcher is sit still — it establishes such a tight connection with the reptile part of the brain that you can’t help but move.

In a nutshell, this is one of my favorite albums of the year so far and about as perfect a summoning of hellish rock ‘n’ roll traditions as you’re likely to come across in 2016.

To pre-order Bewitcher in your choice of formats, use these links: