Kaatayra is a one-man black metal band from Brasilia, Brazil, whose music (he says) is motivated by overcoming the shame of being human by communing with the green of the land and the life of rivers, and by dreaming — “sonha-se as vidas de ascendentes”. His debut album, No Ruidar da Mata que Mirra, was released on March 11th. 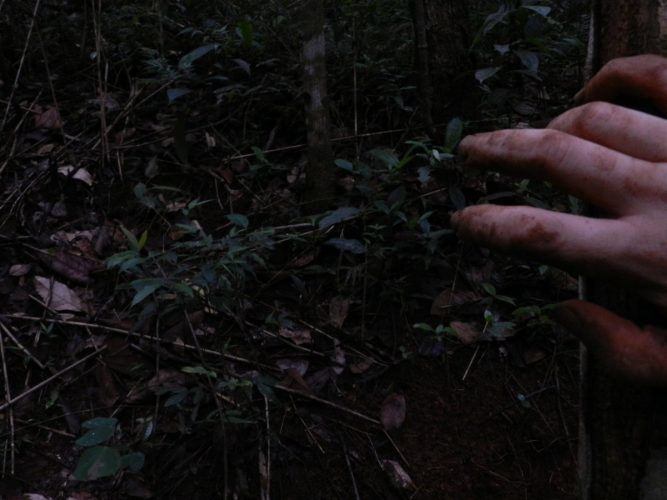 I learned of the album (as I do so much other good stuff) from Rennie (a member of starkweather), who described it as “melodic black metal from Brazil with detours into indigenous percussion and acoustic guitar runs”, with “screamed vocals that recall Blixa from Einsturzende Neubauten“, stacked melodic vocals that “have an almost Pink Floyd cadence”, and “thrashy elements similar to what Deceased do”. A “crazy” and “really cool” album, he wrote, with artwork that made him think of Rudimentary Peni/Nick Blinko.

I agree completely that the album is very cool, as is the cover art. All six of the songs are very long, but the combination of musical ingredients within each of them is a source of continuing fascination. The black metal assaults reach heights of breathtaking explosive power and incendiary extravagance (you’ll see what I mean in the very first track, which includes astonishing drumwork, electrifying leads, and unhinged vocals), but the music is equally capable of becoming spellbinding.

The acoustic instrumental passages are wonderful, and wonderfully varied (those which open the second track and appear in it again later provide a great example), and these are beautifully interwoven with the heavier and more harrowing movements, some of which are shrouded in gloom and some of which burn like wildfires. The soft, clean vocals also work very well in helping change the moods of the music.

Symphonic and ambient elements surface in the last three tracks, lending a mystical and mournful dimension to the music. You’ll even encounter a heavy dose of something like EDM in the first half of the closing track before it goes up in flames. Yes indeed, as Rennie said, this album is crazy.

Given the significant length of every song, the album is definitely a lot to take in, but I think you’ll find it time well spent. 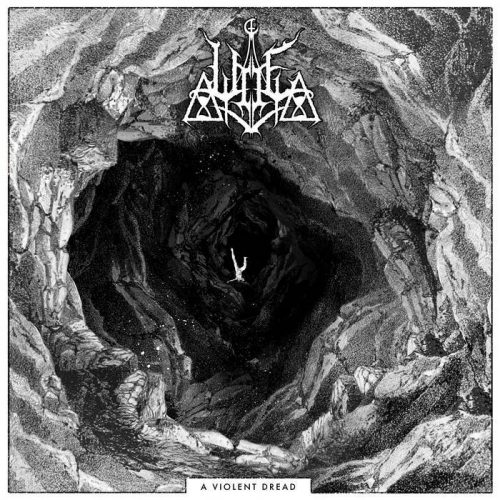 A Violent Dread is a new 18-minute EP released on March 15th by the New York black metal band Woe, a consistent favorite of our site. According to Woe’s frontman Chris Grigg, the title track picks up exactly where the band’s last album Hope Attrition left off, both thematically and musically: “It is a song about death, fear, and exploitation — the modern focus of Woe. It reflects the seemingly inescapable cycle of violence, mourning, and blame that has become a surreal, predictable backdrop to American life”.

That title track is both incendiary and bleak, almost anthemic in its dramatic power, channeling pain and fury in equal measure and becoming immersive in its effect as it moves in a persistently dynamic course.

The new EP’s second track is a cover of “The Knell and the World” by the Swedish black metal band Dawn, who have provided important inspiration to Woe’s own sound; according to Grigg, Dawn’s Fredrik Söderberg both gave permission for Woe to cover the song and praised Woe’s interpretation of it. I found it utterly gripping and enthralling, and in terms of its emotional intensity, it also packs a heavyweight punch. It makes for a very fine companion to the band’s original song, and together they made this EP an instant purchase for me.

The cover art is by Alex Eckman-Lawn, and the record is available digitally and on vinyl (via Woe’s Bandcamp and in Europe via Vendetta Records). 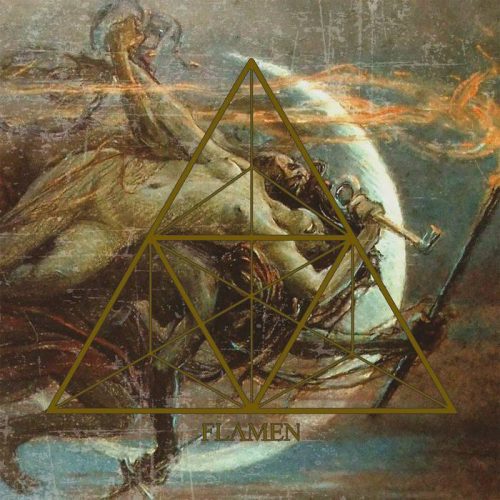 Just when I was about to conclude that France had achieved a near-monopoly on excellent medieval black metal (at least this year), I discovered the intoxicating debut album Furor Lunae by the Italian band Flamen. It was released on March 10th by Wolfspell Records.

For reasons explained at the outset of this column, I’ve been starved of the time needed to do the album justice in words. I’ll say that I found it a masterful hybrid of alluring ancient melody and black metal ferocity, bringing the two very different strands of sound together in ways that create a unifying whole, rather than as jarring juxtapositions. The music is grim and glorious, savage and sublime, and easily capable of transporting a listener to a world of wonder, which makes it a pearl of great price since our own world is so damned sordid and sorry.

Carve out 40 minutes from your day and surrender yourself to this marvelous creation.

For those who may be new to Vielikan, despite how often I’ve written about the project, it’s the solo endeavor of Tunisia-based musician Fedor Souissi Kovalevsky (also a member of the apocalyptic funeral doom band Omination, whose new release via Hypnotic Dirge you should check out here). The next entry in today’s collection is a lyric video made by Saber Dhifet for “Ethereal Travel“, the opening song from Vielikan’s new album Back to the Black Marsh, which is projected for release on March 22nd.

This new song joins two other tracks from the album that have debuted so far — “I am The Black Ocean” and “God(s), Love and Life” — both of which I’ve praised, and both of which you can check out via the Bandcamp link below. This newest song is also worthy of praise. Like Vielikan‘s other dark and dramatic creations, it’s a dynamic and multi-textured affair, both instrumentally and in the vocals, but it’s relentlessly intense, crushingly powerful, and remarkably vibrant. Even at more than 10 minutes in length, it never releases its iron grip on the senses. 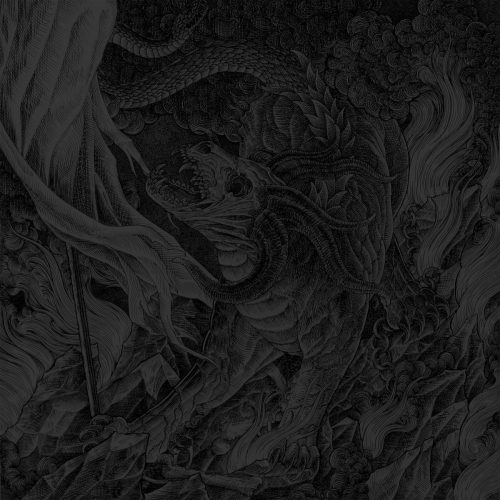 I again have Rennie to thank for introducing me to Herald of Damnation, the debut album by the New Zealand duo Adyire, which was released on March 13th. I would have listened to it anyway, based on the recommendation, but the album art (by one of the band’s members, A.A.) provided extra enticement.

At a very high level, the music is plundering blackened death metal, which assaults the senses with barbaric ferocity. But I wouldn’t call this war metal (even though this band is from a land known for that genre), because such a label might obscure the appeal of the songs’ dark and even dreamlike melodies and the impressive technicality of the performances. The opening track, “Ashen Words Through A Putrid Mouth“, provides a good example of all these qualities. It’s atmospheric as well as battering, and its melancholy melody is quite memorable.

That song isn’t an outlier either.  The rest of the full tracks (leaving aside the funereal yet enthralling interlude of “Lament”) are variations on the same theme. The melodies have a persistently mournful and even miserable timbre, creating moods of desolation and oppressiveness — but they often have an exotic and haunting resonance, and they get under the skin very quickly. At the same time, Adyire are capable of mounting assaults of rampant savagery, and creating moments of dark majesty. 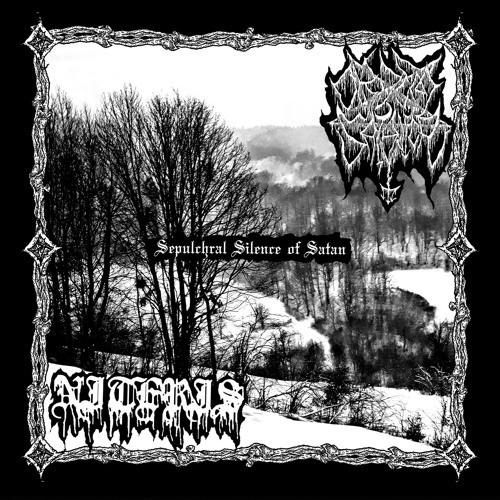 I guess I’ve made it pretty obvious that I’ve become fascinated by the output of bands within the Portuguese Aldebaran Circle, most of which I’ve discovered through releases under the imprint of Harvest of Death, a sub-label of Signal Rex. One of those bands, Ordem Satânica, is participating in a split release with a trio from Bosnia and Herzegovina named Niteris, who are part of another musical collective — the Black Plague Circle, which also includes Obskuritatem, Deathcircle, Nigrum Ignis Circuli, Master’s Voice, and Cave Ritual.

The title of the split is Sepulchral Silence of Satan, and it includes four tracks by Ordem Satânica and two lengthy tracks by Niteris. Below you’ll find one song off the split by each band.

The Niteris track, “Trijumf Volje“, is willfully abrasive and unsettling (which pulls them right in line with the Aldebaran Circle), yet it somehow manages also to be dreamlike and magnificent. The sound is dense and demented, with a bass tone that sounds like the industrial-strength grinding of bones in a mass charnal pit, and ravaging vocals that don’t sound human. The bass really is perhaps the most dominant instrument in the song, and it’s a huge attention-grabber (along with the punishing drumwork), but it’s the sweeping, choir-like keyboard melody that moves through the music which gives it such spine-shivering grandeur.

When the fury of the assault lessens in the song’s second half, and mesmerizing guitar leads take command of the melody, the hallucinatory quality of the song becomes even stronger — and it’s absolutely mesmerizing. A darting guitar refrain leads back in to another extravagant onslaught, which propels the song to a harrowing crescendo.

The Ordem Satânica track, “Morte Glaciar“, on the other hand, is much uglier and more bestial. Everything is fiendishly distorted and murky; the drums are often barely detectable; the vocals are a repellent, gagging grotesquery, like a jagged form of throat-singing (there there are some crazed yells in the background). And yet… and yet… the twisted guitar leads within the song have a glorious and exultant quality, adding a dimension of seductive mysticism to this experience in cruelty. The song grew on me the deeper I went into it, and grew even more on subsequent listens.

For further info about this split as it becomes available, check these links: