(Here’s Andy Synn‘s review of the new album by the British Columbia death metal band Gomorrah, which is being released today.)

While I definitely could have written about this album long before now (seeing as how the band’s representatives were kind enough to send me an early promo copy on request), I decided to wait until today to publish my review as I wanted everyone reading it to be able to listen to (and, ideally, purchase) the full record straight away.

Because while I can’t guarantee that all our readers are going to fall in love with Gomorrah (the band and/or the album) as much as I have, chances are that the band’s bombastic, blast-tastic brand of high-yield, high-octane Death Metal will appeal to an extremely wide cross-section of our regular audience. 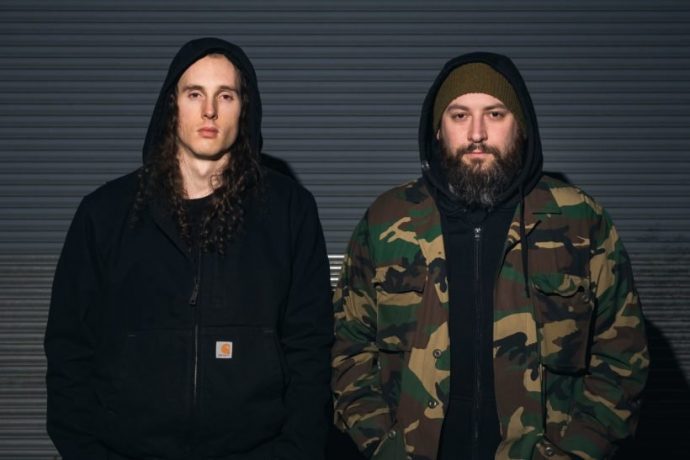 The reason I’m so confident about this is that Gomorrah (aka the duo of Bowen Matheson and Jeff Bryan) are in possession of a sound made up of multiple strands of deadly DNA drawn from across the Death Metal spectrum, all carefully synthesised into an incredibly unique, yet also instantly recognisable, monstrosity that’s best enjoyed at maximum volume.

Just within the first few songs you’ll experience a barrage of speed and brutality that recalls Hour of Penance and Blood Red Throne, a twist of technicality and melody reminiscent of Man Must Die and Cattle Decapitation, and an incisive intensity which should appeal to fans of both latter-day Aborted and early Whitechapel alike, along with a host of other elements and embellishments (particularly a strikingly atmospheric aspect) all designed to get your blood pumping and your neurons sparking.

And yet, despite all this liberal name-dropping, there’s never a moment where the duo don’t sound like a distinct, and effortlessly devastating, entity.

It helps, of course, that while Matheson handles all the guitars and Bryan vomits forth fire and brimstone behind the mic, the drums on this release are provided by infamous uber-drummer Hannes Grossmann.

And while there are undoubtedly a handful of other, similarly skilful, drummers who could have delivered the same speed and power, Grossmann’s willingness to play around with the material in a more creative fashion (both Matheson and Bryan have gone on record to state that Grossmann was essentially given free rein to compose and perform his own parts in addition to acting as the album’s primary producer) elevates every single track to a whole other level.

Another point in the album’s favour is that, despite the relatively succinct length of the tracks involved (the longest of which, doom-laden closer “Of Ghosts and the Grave”, still doesn’t even break the four-minute mark), each one still manages to pack in a shocking amount of hooks and heaviness, aggression and atmosphere, melody and technicality, without ever feeling rushed or over-stuffed, something which stands as a clear testament to the pair’s increasingly impressive and sharp songwriting skills.

As virulent and visceral as it is confident and cerebral, Gomorrah may well be the archetypal Death Metal album for the modern-day misanthrope.

But don’t just take my word for it, check it out for yourself!