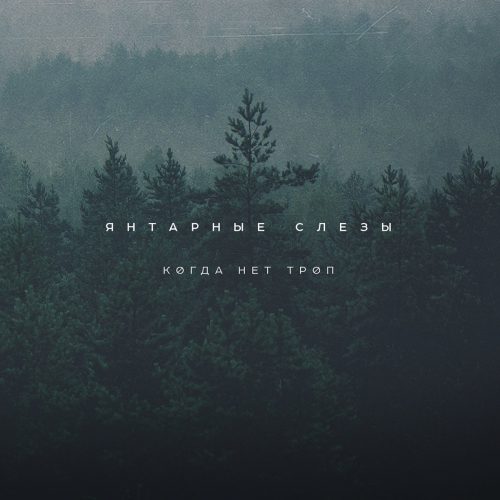 It was only yesterday that I wrote about a song from the new album by the Russian pagan doom band Amber Tears [Янтарные Слезы]. I knew then that we would be premiering the entire album today, and I had planned to recommend the track much earlier than I did, but I couldn’t resist. “Sing the Wind, Sing the Raven” [Спой Ветер, Спой Воронis] such a powerfully captivating song, its mood so wintry and haunting, so steeped in sorrow down to the marrow, so deeply moving, yet so glorious.

What I knew then, and can prove to you now, is that the entire album is just as captivating as that opening track. Entitled When No Trails [Когда Нет Троп], it will be released by BadMood Man Records on March 29th — tomorrow! 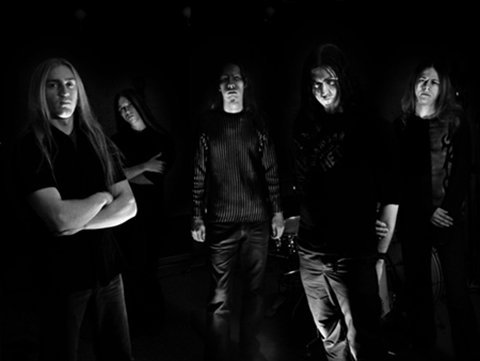 The glistening, tear-stained melodic riff that first emerges just before the 1:00 mark of “Sing the Wind, Sing the Raven” got its hooks in my head immediately, and every time it resurfaces in the song it’s just as penetrating. The deep, growled vocals are also extravagantly powerful in their emotional intensity, and the swirling solo that emerges in the song’s back half, when the music becomes more vibrantly anguished, is wonderful.

Similar ingredients make all the songs into stunning experiences. The heavier aspects of the songs — and they are very heavy indeed — manifest the gray grandeur of looming mountain crags and the panoramic scale of endless tundra, while the guitar melodies and keyboard accents shine like ice beneath a midnight sun. This is most definitely the music of winter, with a solemnity befitting the vast, encompassing majesty of nature in the depths of its cyclical death, and with hints of a spring that might not be welcomed.

“Where I Stayed” follows that remarkable opening track, proceeding at the pace of funeral doom. Titanic chords, massive drum detonations, and a high, swirling lead guitar (gleaming and aching in equal measure) enact tragedy on an enormous stage. We hear somber spoken words and crystalline notes over a huge bass beat and a giant drum rhythm, as well as cavernous harsh growls whose feeling extends from abyssal gloom to shredding despair. A slow, mesmerizing solo emerges over a riff and a rhythm that shake the body like a castanet containing our bones.

The fluid soloing in each song really is amazing, channeling different moods, but always in gripping fashion. But it’s not as if you reach the point when you’re just impatiently waiting for them, because what precedes them is always so staggeringly powerful and immersive. The ritual drum rhythm and clean choral vocals mixed with reverential spoken words create a riveting start to “In the Whirlwind of the Last Days“, which is somber, stately, and earth-shaking. When the extended solo arrives, it’s soulful and thoroughly desolate, crying out as if pleading for a rescue that will never come.

“Under the Stars Light” is probably the closest competitor to the opening track for the “most infectious” song on the album. The lumbering bass and potent drumming at the outset get the head moving hard, while a skirling guitar melody transforms into the sound of weeping. The song becomes more hopeless in its atmosphere, powered by a gargantuan lurching cadence and a sorcerous yet heart-aching solo. But there’s no question the band know the power of that opening sequence, because after a calamitous interlude in which the vocalist cries out in extremity, they return to it.

Soft, wistful acoustic picking leads us into the long closing track, “Where There Is No Spring“, joined by the echoing resonance of spoken words and ambient shimmer, deepening the music’s contemplative and forlorn mood. And then things get very, very heavy, and the song becomes a slow march, the music of shivering, bedraggled people struggling on beneath the crushing weight of all their misfortunes and regrets, an endless line stretching to the horizon beneath the monochrome gray of heartless skies, their bitter tears mixed with freezing rain.

When No Trails is a powerful album at many levels, from the sheer overpowering impact of its crushing heaviness to the gut-wrenching, soul-shaking effect of its yearning and hopeless moods, from the icy beauty and ominous grandeur that shines from the melodies to the visceral, ravaging effect of the vocals. Very easy to get lost in this album — so get lost in it below, on the eve of its release.

One Response to “AN NCS ALBUM PREMIERE (AND A REVIEW): AMBER TEARS — “WHEN NO TRAILS””