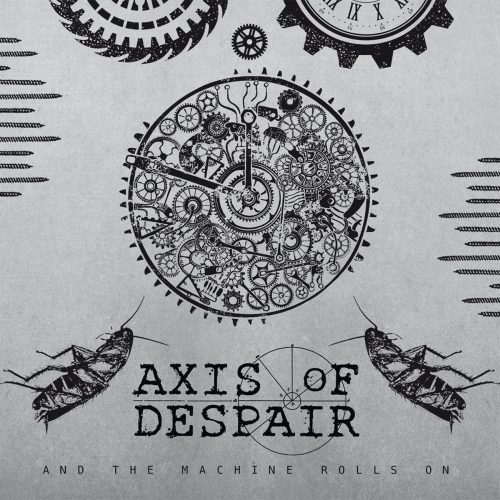 (Here’s DGR’s review of the new EP by Sweden’s Axis of Despair, which was released in February.)

While a lot of reviews so far this year have been the result of my waiting to see how an album sits with me post-release, or the more common reason of playing desperate catch-up with all the stuff I want to write about, the release of Axis Of Despair‘s latest EP And The Machine Rolls On — with Selfmadegod handling black and pink vinyls of the release — is one that legitimately just flew under our radar.

Released in early February, And The Machine Rolls On contains another six songs of the musical spasm that Axis Of Despair call their branch of grind. The group recorded it during the sessions for last year’s Contempt For Man release, and it runs about nine minutes in length. 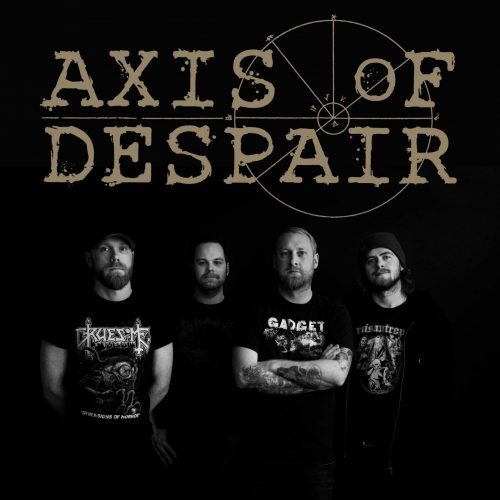 If you missed it last year, Axis Of Despair‘s first full-length ranked pretty high with us and even made my personal year-end list as part of a dedicated grind block. While it didn’t break a lot of boundaries, it was done so well that it found itself in the weird position of being grind comfort food, and one of those releases that wound up as a default go-to when the decision of what to listen to proved far too difficult.

As one might guess, And The Machine Rolls On is largely similar to Contempt For Man, save for a few interesting and brief experiments. It sounds quite literally like it starts where Contempt For Man suddenly left off, with its opening song being one of the more blatant grind openings out there to date.

And The Machine Rolls On begins with a scream and the band already at top-speed when the listener joins in; the titular machine is already rolling before we even get to join in on the affair. The first minute-and-thirty-seconds of “Emasculate” starts with one real quick groove and then Axis Of Despair kick right into gear with a multi-layered vocal attack that gives way to a tremendously noisy assault from there. “Emasculate” wraps itself around one real sharp groove at its mid-point but then quickly travels back to its comfort-zone of blasting away like a mining crew clearing out the walls of a quarry.

Like Contempt For Man before it, many of the songs on And The Machine Rolls On segue into one another through sheer force of a sudden start/stop mechanics. The six songs present on the EP vary between a minute or two in length, but none goes into the epic grind range. If anything, the one outlier (“Sonderfall”) does the exact opposite, providing a twenty-five-second blast in between two longer songs, with the seeming detonation of a bass guitar in its opening. It’s one of the few experimental moments in an EP designed mostly as a force of nature. and the continued high/low interplay on vocals just adds to the overall quick nature of the EP.

“Slow” and “Bloodloss” make for an interesting pairing in the middle of the EP as well. “Slow” is the more ferocious and noisy of the two and also contains some particularly nasty circle-pit riffing as its main course, before getting a little death metal in its screaming in the back twenty seconds.

“Bloodloss” is interesting in part because it is something of a slower song in its opening; also having a lead melody for a bit comes as a surprise. Where most of As The Machine Rolls On is a pretty straightforward blast-party, like its older sibling, it also has the occasional moment of slow-groove, even if halfway through the song the band give in to their grind impulses and go back into heaviness by force of song tempo. “Bloodloss” makes up the meat of the EP in that regard, with the clearest beginning and ending to it, especially as there is probably no easy way to lead in to the previously mentioned chaos that is the twenty-five second “Sonderfall”.

And The Machine Rolls On may be one of the most on-the-nose record titles in a little while, but it is literally a “Did you like Contempt For Man? Here’s more'” style of music. The six songs were recorded around that time and carry much of that album’s spirit, adding to the overall bulk of work that Axis Of Despair have pumped out over the recent handful of years. It’s fun to hear more from these guys. Hearing the multi-pronged vocal attack brought a little more to the forefront, as well as an embrace of the more chaotic side of their sound — if for only brief spurts  — makes this EP a worthwhile experience. It only being a little under ten minutes in length helps a ton too, easily enabling the constant repeats as it whips by you again, and again…..and again.

One Response to “AXIS OF DESPAIR: “AND THE MACHINE ROLLS ON””