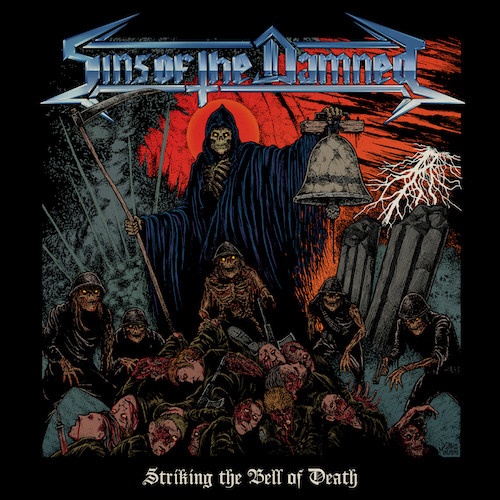 Sins of the Damned began in Santiago, Chile, in November 2013 with the aim of creating speed metal with South American authenticity, and devoid of lyrics that might embrace fantasy. From 2014 through 2017 they released a series of demos and splits, and a 2017 compilation collected much of that work. Now they are about to release their first album, Striking the Bell of Death, with a due date of May 3rd through Shadow Kingdom Records.

On this new album, Sins of the Damned have created something iconic, something that summons so much of what has made fierce and fiery heavy metal so cathartic and so addictive for so many decades — and in the case of this band’s own style, so dazzling and grand. The song we present today, “Victims of Hate“, is a prime example of those qualities. 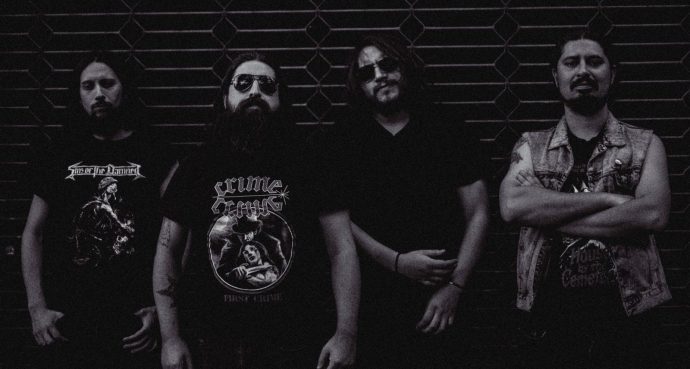 Battering drums, glorious chords, and a scalding shriek provide the prelude, and then the song bursts into a surge of riveting, galloping rhythm and skittering, vibrantly pulsating fretwork. The absolutely scorching vocals complement the blazing intensity that burns through the music in all other respects, and the supercharged energy of the music continues to electrify the senses as the drummer shifts to a battering fusillade and the riffing boils. There are two solos in the song, one that’s magically swirling and flickering and another that’s moody (yet still gleaming) — and they provide further evidence that Sins of the Damned‘s artistry goes beyond technical pyrotechnics and a gift for whipping up a storm in your head.

While the band seem to have no use for sword-and-sorcery lyricism, there’s an air of grandeur and flamethrowing glory in this song, an “epic” quality that makes you want to throw your head back and rocket your arms to the skies, but without diminishing the bloodthirsty ferocity that also makes it a hot-blooded rush. 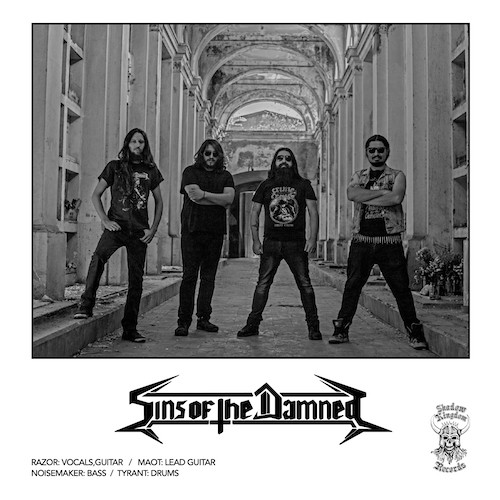 Striking the Bell of Death is recommended for fans of classic Razor, Whiplash, Exciter, and Deathrow (Germany) as well as current torchbearers like Desaster, Gospel of the Horns, Deathhammer, and Italy’s Barbarian. For more info about how to get it, check the links below. And along with our premiere of “Victims of Hate“, we’re also including a stream of the previously released track “Take the Weapons“.

One Response to “AN NCS PREMIERE: SINS OF THE DAMNED — “VICTIMS OF HATE””