I remember being left in a state of gleeful astonishment when I first heard the music of The Pogues. There they were, playing raucous punk music with old acoustic instruments, with tin whistle and accordion, with mandolin and hurdy-gurdy, with banjo and bodhrán. They caught the spirit of punk and made it seem like a natural outgrowth of Celtic drinking songs and folk dances.

The music of Grylle leaves me in a similar state of gleeful wonder, translating the spirit (and some of the sounds) of black metal through ancient instrumentation and the enthralling accents of antique melody. The music and the inspirations may have been born within that most “outsider” of extreme metal genres, but Grylle has then stepped outside of even that, while keeping one foot in the black circle. 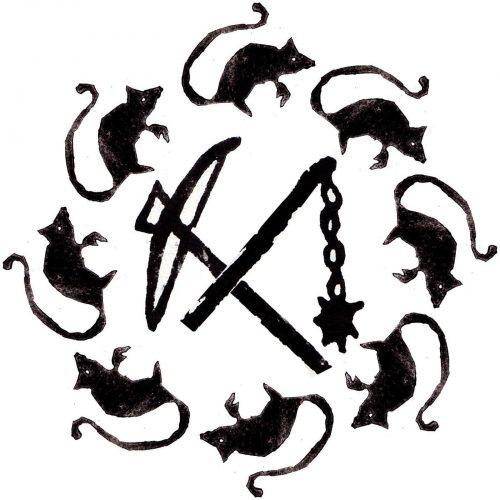 Grylle’s new album, Les Grandes Compagnies, which will be released by Antiq Records on April 20, does include, here and there, the common electrical instruments of heavy metal, but “Gothique Anjevin” is one of the songs on the album that makes almost no use of them at all (a bass can be detected, but that’s all). Instead, Grylle has crafted this brilliant piece of medieval black metal using drums, lutes (both saturated and clean), psalterion, santoor, and mandolin (performed in the latter part of the song by guest musician Bjorn).

The title of the song is a play on words. On the one hand, Le gothique angevin refers to a variant of classical Gothic architecture, which is found (among other places) in the French town where Grylle’s alter ego Hyvermor began seriously playing black metal. On the other hand, it refers to the use of “gothique” by some people who label black metal with that word, being ignorant of the distinctions between the genres of music. And so, as Hyvermor explains, “it is a song about starting black metal practice and being an outsider, not only in normal society but also as regards the black metal microcosm too.”

The vocals within “Gothique Anjevin” are scorching in their savagery, and the thump, crack, clatter, and rumble of the drums have a physically potent effect. Yet the music also brings to mind the swing and whirl of a dance, albeit with a vibrancy that’s shaded by a feeling of peril, as if danger lurks at the edges of the buoyancy in the sound. The magical tones of the old instruments stand out at all times, but most especially in the santoor performance that provides an absolutely entrancing interlude, and in the mandolin refrain later on.

There is also a grand and glorious quality to the song following that interlude (when extravagant cries join in with the raking snarls) — which seems to spiral us up into the air — as well as a subsequent change in mood to something more beleaguered and melancholy. Yet a spark still burns within that bleakness, and comes to life in the mandolin melody that shimmers over a powerful drum rhythm, bringing this wondrous track to a close.

“Gothique Angevin“, the song we’re premiering today, is the fourth track from Les Grandes Compagnie to be made public so far. I’ve written previously about two of those, and will have more to say about the album as a whole when we get closer to the April 20th release date. If you haven’t heard the other three tracks that are now streaming, be sure to visit Bandcamp and do that. They are powerful head-movers, and although there’s a shadow of darkness across the music, they’ll also make your mind swirl.

(Grylle is the solo project of Hyvermor, who also played a role in the wonderful Vëhémence album released earlier this year (contributing vocals, flutes, and psalterion) and who has also been involved in releases by Hanternoz and Régiment, among other bands.)