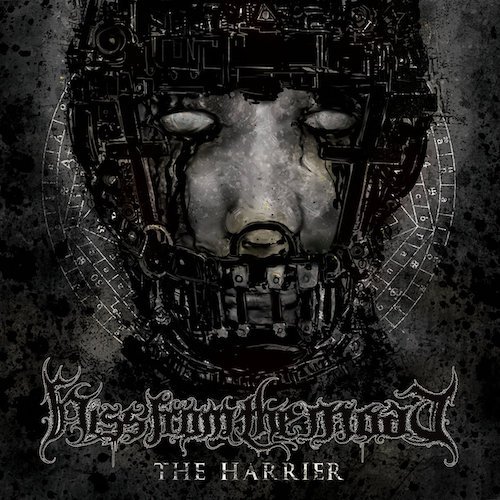 (Here’s DGR’s review of the new album by the Italian extreme metal band Hiss From the Moat, which was released by Salem Rose Music and M-Theory Audio on February 22nd, and features cover artwork by Stefano Bonora.)

The family tree of the hyper-blasting death metal groups from Italy is a densely populated series of branches that seem to spiral every outwards with a tremendous number of offshoots and tied-together snarls that could make fractal patterns jealous.

This specific region and genre have found more musicians crossing paths than might even be initially obvious. Hiss From The Moat‘s branch of the tree has always been a strange outlier, taking their genre’s penchant for near-relentless and precise brutal death metal and combining it with the heavy atmospherics and low-tuned guitar batterings of blackened death metal — like a latter day Hour Of Penance crashing headlong into Apostasy/Evangelion-era Behemoth.

While it is admittedly reductive to narrow down Hiss From The Moat with such references, releasing their previous album — late 2013’s Misanthropy –– with vocal work contributed by Hour Of Penance‘s Paolo Pieri likely colored the group’s reputation a bit.

The Harrier, the group’s newest album, casts Hiss From The Moat in a somewhat different light, however — not straying too far from their chosen writing style but as a full group with a new vocalist in tow and a whole lot more determined and scrappier-feeling than the darkened atmospherics of Misanthropy.

The atmospheric aspect of Hiss From The Moat‘s sound remans firmly in place on The Harrier, and ritualistic smoke always seems to swirl right on the fringes of every song. Vocalist/Guitarist Massimiliano Cirelli‘s high snarl and lyrical grandiosity combined with the relentless wave of force that is the rhythm section of Hiss From The Moat has the band sounding absolutely ferocious, and across The Harrier‘s ten songs and one lengthy interlude (serving as one of the few moments of peace), the band make sure you get plenty of it.

It’s tempting to refer to The Harrier from here out as a non-stop blastfest, but that’s not the case; drummer James Payne serves up a tremendous amount of drumkit destruction but Hiss From The Moat spend a lot of time making some absolutely massive-sounding mid-tempo epics this time around. Adding to it, the group get plenty of use out of some equally massive, orchestra-sized war drums on this album, with many a guitar bombing-run sounding off with a thick double “Boom” coming from the percussion section beforehand.

At times this actually called to mind Hate’s usage of the massive drums as backing atmospherics in the song “Festival Ov Slaves” from Solarflesh, the thundering low-end creating the same effect here as it did there, except it’s spread throughout much of The Harrier, especially making itself known in the group of songs following “The Passage To Hell”.

The aforementioned “The Passage To Hell” proves to be one of the more interesting tracks on The Harrier (the band even filmed a music video for it), especially coming so early in the track list. “The Passage To Hell” actually runs pretty similar to its predecessors (“I Will Rise” and the title track) as an almost all-out assault on the senses, but the inclusion of acoustic guitar bits in its intro and throughout the backing of the song almost force “The Passage To Hell” to be more dynamic than the walls-of-flame-style annihilation the first few songs deliver.

That it also leads into the thundering four-and-a-half minutes of “Slaves Of War” — which is the first of the sort of thicker, drum-heavy, slow grinders that make up a surprising amount of The Harrier, given the initial speed-heavy impression of the first few songs — is a big plus. If anything “Slaves Of War” will definitely get people used to the previously mentioned guitar bombing run preceded by loud drum warning, because that makes up a huge chunk of that song’s format.

They even continue into the much faster and more tradionally speed-fueled “Sine Animvs”, whose back half starts to feel a bit like a continuation of “Slaves Of War”, though Hiss From The Moat are quick to scour that feeling from one’s mind because the last fifty seconds or so of that one has a surprisingly melodic guitar and vocal combination that leaves a lasting impression.

Though it can often seem like interludes on albums are fluff on a tracklist at their worst — especially if an album has an intro and an outro — or “hey, here’s a nice acoustic guitar piece to prove that we’re not just idiot cavemen!” at other times, the interlude that lies at the center of The Harrier is actually a welcome change of pace, because the opening half of the album and the bits that follow it are near-overwhelming. If they aren’t going for the destruction by high-speed kinetic railgun approach, then the band are going for the thudding giant-stomping-all-over-the-planet level of heavy.

The acoustic piece, titled “The Abandonment”, is welcome for that reason and also because of the songs that bookend it. “Sine Animvs” and its non-stop razorwire attack comes before, and “The Allegory Of Upheaval” comes after. “Allegory’s” slow opening grind goes for a slow suffocation approach in order to welcome listeners back. It also shares a lot of similarity in its opening with album closer “The Decay Of Lies”, as if the two were fraternal song twins at one point before the two in between them made their appearance.

Those first of those two intervening culprits is “God Nephisto”, which is one of the faster songs on the disc and much more in line with its brethren in the first half of The Harrier. It also features a terrifyingly fast double-bass roll in its closing minutes to help complement the already militaristic nature that the drumming seems to assume during its time.

“Unperishing” — the only single-word song title on The Harrier — complements it by basically picking up right where “God Nephisto” left off, taking its apocalyptic speed and atmosphere and shedding the atmospheric aspect in favor of sounding like a song slowly being burned away as it accelerates, layer-by-layer coming off as it increases in velocity — and that seems to all happen in its first minute before Hiss From The Moat just pile even more on top of you.

Of course there’s that certain bit of unshakeable “This is really blackened death metal” feeling on The Harrier; Hiss From The Moat don’t seem shy at all about what sort of music they want to make. It’s not boundary-breaking by any means; instead, Hiss From The Moat spend much of The Harrier demonstrating that whatever sound they want to go with, if they set out to do so, they will do it terrifyingly well.

Much of the The Harrier is so relentlessly precise, with almost no room to breathe, and it can often be a little suffocating as the band thunder on from song-to-song, making the four-piece feel absolutely immense. Hiss From The Moat cover a lot of ground during The Harrier‘s forty-three minutes, and in that time manage to make an album that is more Hiss From The Moat planting a flag in their chosen genre than one whose various pieces are nakedly worn on their sleeve. If you’re looking for one of the more densely packed, drum-kit-annihilating, war-drum-thundering, death metal albums to come out this year, then The Harrier may have precisely what you’re looking for.

One Response to “HISS FROM THE MOAT: “THE HARRIER””