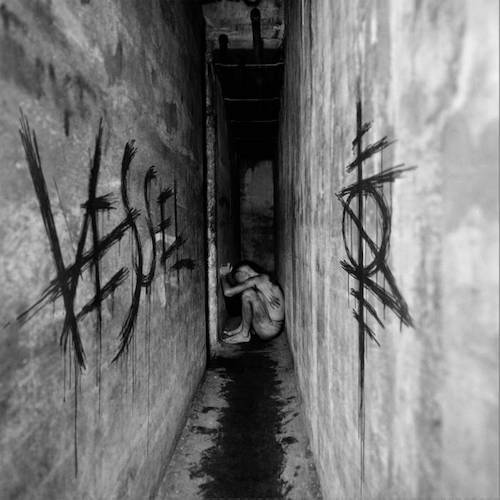 (DGR reviews, in great depth, the new album by Seattle’s Theories, which will be released by Corpse Flower Records tomorrow — April 12th.)

It’s always a surprise when an album’s art manages to perfectly encapsulate the music within. We’re big fans of awesome album artwork around here, but the times when the art manages to leap past just being an awesome picture and adds to the listening experience are truly special.

I raise this observation in part because the album artwork for Seattle deathgrind group Theories‘ sophomore album Vessel manages to do just that, capturing both the spirit of the album and the production and atmosphere surrounding it.

After a spin of Vessel it’s not hard to imagine that this album was recorded in the same miserable underground dwellings that the album art portrays as the residence of that unfortunate victim. It could also very well be the chaotic soundtrack to what is going on in that individual’s head, as Vessel is a dark and brooding follow-up to its predecessor, 2015’s Regression, and one that finds the band deciding not to go with a straightforward successor in style, but creating an entirely different beast in its own right. 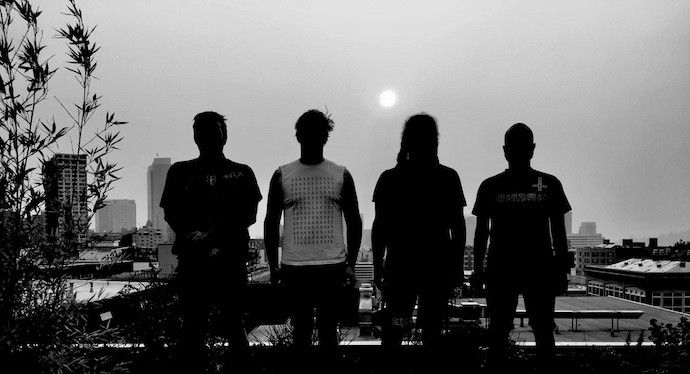 Vessel is an ugly and reactionary monster of an album. Joined by new vocalist/guitarist Wes Harrison in place of previous lead vocalist Rick Powell, Theories have adopted a three-pronged vocal approach that they then immediately bury in raw murk and encase in a wall of death metal guitar. It makes the follow-up to the furious and fiery Regression sound like it was recorded in a set of long abandoned catacombs underneath a city.

Vessel also stands in contrast to its predecessor in quite a few other categories: It’s a longer album; within the deathgrind genre nomenclature that defines Theories‘ music, Vessel leans more death metal; its production is a lot thicker and more low-end-focused, with the whole affair having a thick layer of sludge on top of it; it is far less up-front, in-your-face, and high speed at all times, instead favoring a much more groovy and mosh-heavy approach; and the snare drum — of which there is a ton — is far more punchy and echo-heavy in the mix than the non-stop snare barrage in Regression.

Though there is a common thread of sarcastically cheerful nihilism coursing through Theories‘ overall sound and songwriting style, and the band love themselves a good circle-pit riff whenever they can hammer one in, their two full-length releases are such distinctly different beasts that it seems clear that Theories did not want Vessel to just be their debut album again.

The shift between the two albums is immediately noticeable in album opener “Human Vessel Cell”, which is, in comparison to the rest of the group’s collective works, as well as a good chunk of Vessel, a mid-tempo grinder of a track. Buoyed by a solid groove and drenched in the aforementioned heavy layer of muck, Theories rumble through the album’s opening number. “Human Vessel Cell” is a simply laid-out track, part intro and part lesson plan for what Vessel will be as a whole.

It’s also the shortest song present on Vessel at a little over two-and-a-half-minutes. Funny in part because that still means it is longer than half of the songs on the group’s debut. “Human Vessel Cell” quickly thuds its way across a couple repetitions of itself as it grows in volume — and death metal buzzing guitar — and then just as quickly vanishes in favor of the meatier songs to follow.

Vessel is more defined by the following song “Harvest”, and most of the tracklist runs in similar variation of it. It’s a big and brash song — though not the longest one — constructed out of equal parts super-fast grinding with enough drumming to make it feel like you’ve gone through a tumble dryer cycle from the inside with a handful of bricks joining you, and equal parts slow and massive groove. “Harvest” is also where the multi-pronged vocal attack really comes into play with the screaming and yelling coming in from all corners as Theories tighten down the vises on the listener’s heads while ratcheting up the intensity throughout.

There’s a couple songs within Vessel that especially verge pretty close to -core level breakdowns, including “Undertow”, which the band may have doomed themselves to playing live for a very long time if not just for the call-and-response-style opening and the big, shuddering chug that the song is built around.

If you were among the lucky ones who were able to get their hands on the group’s EP Trigger Warning or caught them on the road in recent years, you’ll likely have some familiarity with a few songs present on Vessel. The aforementioned “Undertow” was on that EP, as well as “Ill Will” and “Hospital Hangover”, both of which make for interesting listens on their own, as well as within the added context of being able to hear how the songs have mutated and changed for their iterations on Vessel.

In the case of “Hospital Hangover”, it proves to be a highlight of the latter half of the album, as the immense high screaming and blasting segments that make up a majority of that song sound absolutely apocalyptic and hard as hell not to feel some sort of rush from. “Ill Will” proves to be an all-out assault in its first half, before a pretty obvious and shifting build into the sort of massive groove that, conveniently enough, spills over into “Undertow”, as if the two were the same object viewed through two different lenses. There are plenty of similarities between the two, and enough to know that they’re siblings, but one more aggressive and violent and the other content to brood and then throw its weight around.

Vessel’s back half is clearly presented by a minute-and-a-half-long ambient noise loop conveniently named “-“, which appears as track five. It makes the pacing a bit strange, since Vessel then becomes four songs up front and five songs in the back, but by that same token the back half of Vessel is more intense and blast-heavy than its opening songs.

For instance, both “Lamprey” and “Slow Poison” are two incredibly in-your-face hellfire furnaces in song form, both driven almost entirely around their titles being yelled over and over as the band barrel through whatever audio wasteland they’re travelling through.

“Slow Poison” comes off especially mean with its teeth bared for most of the song length — a near constant and never-ending growl. Combining it with “Lamprey” before it, and having “Hospital Hangover” follow it, makes for a killer three-song run, though the songs in Vessel’s back half tend to combine whether you want them to or not; the songwriting often makes it seem like each intro is in the act of deftly dodging out of the way and trying to accelerate into its own armageddon as the previous song’s closer almost tumbles into it like a crowd all spilling out of the same exit.

The way that Vessel fades out and back in on what sounds like a guitar being lit on fire during the closing song “Hollow” only lends credence to the idea that each song is like another gale-force wind scouring a landscape already rocked by natural disaster. “Hollow” is also a hell of a closer because of the way it moves. For the briefest of moments, it actually has something that comes off like a lead melody in its beginning segment before descending into an incredibly percussive vocal line that has Theories throwing multiple start/stop vocal punches — and then does so again at the halfway point for one of the most neck-snapping moments on the disc, before finally tumbling down the path of its aforementioned alien-riff closer.

Vessel is an unexpected follow-up to Regression but also one that — like its predecessor — is a solid snapshot of what Theories currently are as a band, with album art that expertly captures the layer of dirt and grime that the group have added to their sound. While the more up-front and louder-than-a-sonic-boom violence of its predecessor may have been left behind, the brooding destruction that the band currently favor is just as effective and at times will still feel like you’ve heard a group destroy their instruments over the course of almost forty minutes.

The heavy and crushing atmosphere of Vessel makes for an intense listen, and the group’s mosh-heavy elements being brought more to the forefront means there are plenty of moments that will leave a listener with a neck-ache by the time things are wrapping up. While having two fairly distinct releases has made Theories‘ branch of deathgrind harder to pin down, it has certainly made the prospect of waiting as long as we did between these two discs for a potential third one into something much more painful.

Until tomorrow, the entire album is being streamed exclusively at Revolver — here.