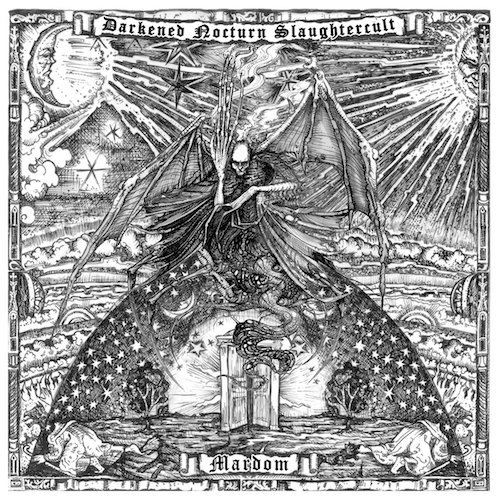 (This is Andy Synn‘s review of the new album by the German black metal band Darkened Nocturn Slaughtercult.)

The name Darkened Nocturn Slaughtercult is one of those monikers that, once you’ve heard it, you’re unlikely to ever forget.

Unfortunately it’s been my experience that, even amongst the Black Metal faithful, the band’s name is somehow still more famous than their music.

Thankfully, with the release of their sixth album (which comes out today on War Anthem Records) I’m hopeful that this might just be about to change, as Mardom is not only a fantastic continuation of their already impressive legacy, and a near-perfect jumping-on point for new fans, it’s also one of the best Black Metal albums I’ve heard so far this year. 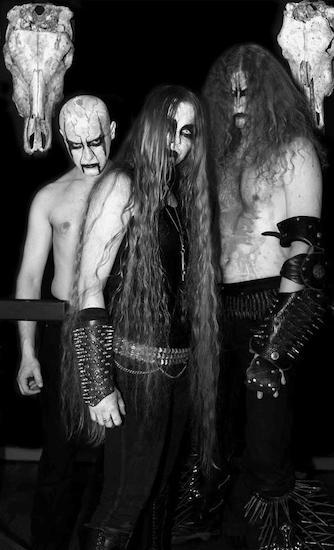 Perhaps the band’s greatest strength, and most defining characteristic, over the years has been their ability to remain true to the genre’s roots without falling prey to either the creative stagnation or outside temptations which have, more times than I’d like to count, ultimately been the undoing of many of its bigger, and more (in)famous, names.

Instead, while many of their peers have either collapsed in upon themselves or transformed into something that no longer deserves, or desires, to be called Black Metal, DNS have simply remained focussed on refining their art and remaining true to their ideals, refusing to compromise or stray from the path in their pursuit of perfection.

Most importantly, however, Onielar and co. clearly understand that “old school” doesn’t have to mean “outdated”, being “raw” isn’t the same as being “sloppy”, and that embracing “tradition” doesn’t mean accepting “limitation”. 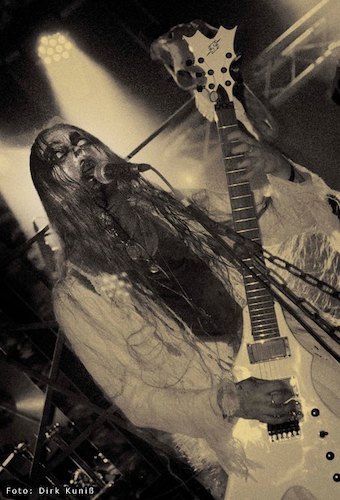 As a result, the sheer, raw intensity of this album is a true sight (or sound) to behold, and the blend of blazing ferocity and merciless precision displayed on cuts like “Mardom – Echo Zmory”, “Exaudi Domine”, and “Imperishable Soulless Gown”, could go round-for-round with anyone and everyone from Mayhem to Marduk to early Immortal, without ever once feeling obsolete or antiquated.

It helps, of course, that the wicked, finger-shredding riff-craft displayed throughout the album (with the scything “T.O.W.D.A.T.H.A.B.T.E.” being perhaps the best example) showcases a similarly sharp and subtly technical flair to that of a band like Funeral Mist or Nidingr, while the icy and surprisingly elegant production work successfully gives each and every element and instrument a punishing, palpable presence, without rounding off the rough and serrated edges of the music in the process.

It’s also impossible to deny the hellish hookiness of these tracks, from the face-melting ferocity of “A Sweven Most Devout” to the grimly groovesome strains of “The Boundless Beast”, or the clever and carefully constructed songwriting which underpins captivating cuts like the expansive, atmosphere-heavy “A Beseechment Twofold” or seethingly melodic close “The Sphere”, and it’s the combination of these many factors, along with a clear and unshakeable vision for what Black Metal can, and should be, which makes this album such a truly vital and relentlessly visceral listening experience from start to finish.