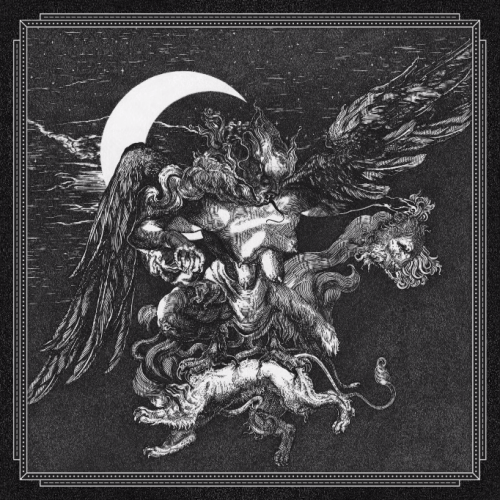 The Polish black metal band Deus Mortem was last featured on No Clean Singing in 2016, with their excellent EP Demons of Matter and the Shells of the Dead. This year, they will be back with their second full-length release, titled Kosmocide. In fact, the release – which will be carried out by Terratur Possessions and Malignant Voices – is only two weeks away (April 28 marks the date), so prepare yourselves for imminent inflammation.

Fortunately, the label has provided us all with a warm-up in the shape of a track premiere with a lyric video. Check it out below.

(The album also features amazing artwork by Artem Grigoryev, which you can feast your eyes on above.)

Another opus that will be released through Terratur Possessions this year is the sophomore, yet untitled, album by Misotheist. The band, hailing from Trondheim, Norway, was featured on No Clean Singing in November last year, together with a stream of an advance track from their debut album. Now, merely four and a half months later, they present us with a track from their second album.

“Benefactor of Wounds“, which is the name of the new track, is a bludgeoning, sonic voyage through a post-apocalyptic soundscape of air raid siren guitars, cluster-bombing percussion, and vocals of barbed wire. The song is substantially shorter and far more intense than the tracks on the debut album, with more dominant lead guitars and a generally improved sound. If the rest of the album is equally good, it will certainly be one of the highlights of 2019.

This third entry isn’t exactly news, seeing as the EP in question was originally released last year. Recently, however, it was released on vinyl and Bandcamp through Vendetta Records, which is how I discovered it. The release I’m talking about is De Doden van’t Waterkant – the debut release by the German black metal band Friisk. Although the band is German, the title of the EP seems to be in Dutch or Frisian, which is, perhaps, less surprising once you learn that the band is from the region of East Frisia, next to the Dutch border.

Excluding the intro, the EP consists of four varied, yet unified tracks that form a stellar mix of despairful, agonized, and angered moods – all brought to life by abrasive rhythm guitars, wailing leads, and persistent percussion with a cataract of cymbals. With a superb debut like this, I certainly hope to hear more from this band in the future.

I’m aware that Sühnopfer was featured with a track premiere on No Clean Singing only a month ago, but since then another track has been made available for streaming. And as someone (probably Einstein if you ask the Internet) once said: “Too much of a good thing is wonderful”. Plus, by including Sühnopfer in today’s post, I’m setting up a perfect segue for the band below.

All jokes aside, this track, bearing the title “Je vivroie liement“, deserves a place in today’s post completely on its own merits. It is a ferocious and fast-paced frenzy with pervasive guitar melodies and a portentous interlude, crafted in that characteristic style of medieval black metal. May 10 (the release date for the album) can’t come fast enough!

While we’re on the topic of medieval black metal, let’s move on to a band that hasn’t been featured on No Clean Singing before, namely Ungfell. Two days ago, this striking black metal band from Zürich, Switzerland released a music video for a previously unreleased track titled “Das Hexenmal“. The video consists of black-and-white video clips which I assume are taken from old drama and horror movies. And despite having a whimsical atmosphere, the visuals fit the music oddly well.

But the important aspect here is, of course, the music itself. In typical Ungfell style, the sound is raw and rugged with pestilent tunes and harrowing vocals. The song also has brooding and ominous interludes to keep you on edge, and simplistic, yet infectious riffs that make sure you’re not getting away.

Also, if you don’t know Ungfell from before, I urge you to check out their other material as well – particularly if you’re a fan of Peste Noire and Sühnopfer. Their discography includes two albums, a split, and a demo, so it should be enough to keep you occupied for a couple of hours. It’s all available on Bandcamp. The link below will take you there.

The last entry for today’s Shades of Black will be a rather familiar name – in fact, I’m going to go ahead and assume that all of you know Abbath – both the artist and the music. This week saw the release of the music video for the track “Harvest Pyre“, taken from the upcoming album Outstrider, which will be out on June 5 through Season of Mist.

Both the video and the music are exactly what you would expect from Abbath – this time with an extra cheesy guitar solo, just in case all the close-up shots of his panda painted face wasn’t enough. Nevertheless, he may be a diva, and he may not be reinventing himself, but he knows how to make catchy tunes.