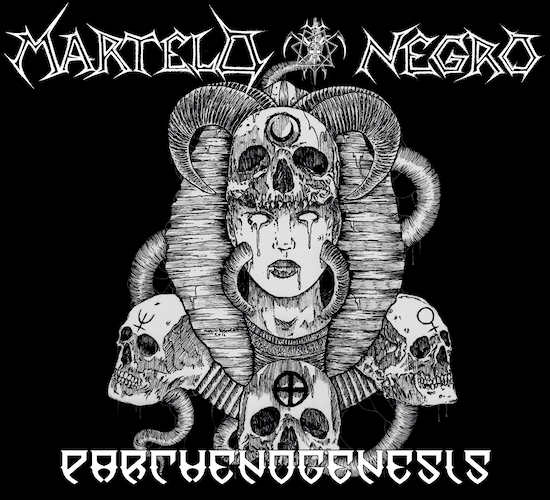 On their impending third album, the Portuguese band Martelo Negro (“black hammer”) have whipped up an intoxicating but thoroughly evil musical concoction. With ingredients that range from black metal to thrash, from death metal to d-beat punk, the music is brutish and bruising, bombastic and barbaric, demented and demolishing, occult and orgiastic. By turns it’s a demolition job, a chaotic romp, a dismal plague, and a ghoulish vision of ultimate horror. It’s also catchy as hell.

That’s a lot of diverse qualities for any one band to pull together in an organic way, and Martelo Negro do it in every song, which makes the album a relentless thrill ride (and a really nasty one too). You’ll get the chance to experience it yourself right now, because we’ve got a full album stream to share. And if you’re as high on it as we are, you won’t have to wait long to pick it up, because Helldprod Records is releasing it on April 17th. 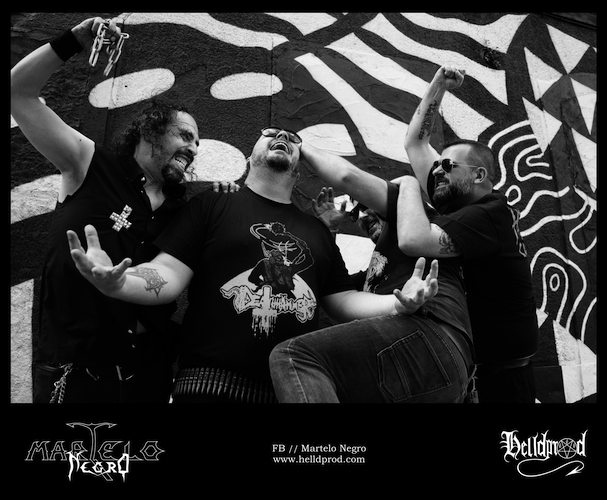 The riffs in these songs, which are damned addictive, are executed with a heavy, mauling tone, humming with radioactive distortion. They generate a mix of cold-blooded viciousness and fiery hostility. When backed with d-beat drum rhythms, they bring crust punk to mind. But the guitarists are equally capable of launching fusillades of jabbing chords, big chugging cadences, pulverizing stomps, scything tremolo runs, and bursts of thrashing mania, all of it anchored by a deep, gut-rumbling bass and dynamic, skull-cracking drum beats (courtesy of session drummer Arrno Maalm).

The vocals are electrifying — and horrifying. Bassist/vocalist (and band founder) The Beyonder relies primarily on gritty, throaty growls, but mixes in searing snarls, ghastly howls, and demented cackling laughter, sadistically expelling the lyrics in his native tongue.

The album is bookended by instrumental pieces that combine ominous and grandiose symphonic music with weird ambient tones. The intro sets the stage by creating an aura of looming menace and gothic horror, and each song begins with spooky ambient intros that maintain the overarching mood of frightfulness, even though the main body of each song includes plenty of feral savagery.

“Arcanjo das Sombras” provides an early sign of the band’s dynamic approach to songwriting, as it segues from riff to riff, from rhythm to rhythm, until the high energy of the song collapses into a dismal pounding experience laced with sepulchral proclamations and a finale of grim, strummed chords. And while the riffs are the mainstays of the songs, the leads and solos make their own important contributions. A flickering lead in “Rameira Necromante” transforms into a queasy, crazed solo over a giant pile-driving rhythm, while the pair of solos in “Solstício Funerário” are both ghoulish and increasingly deranged.

The back-to-back combo of “Orgias Iniciáticas” and “Serpente do Caos” provide a riveting one-two punch in the middle of the album. Launched by a bombastic opening and an electrifying thrash riff, the former might be the most infectious song on Parthenogenesis, while the latter is another fine example of the band’s dynamism. Mid-paced, menacing, and pestilential at first, it becomes a d-beat demolition job, infiltrated by a guitar lead that seems to ooze disease and becomes more febrile as it flowers. That track also includes crazed chanting and a squalling, shrieking, head-trip of a solo over a massive head-hammering rhythm.

“Solstício Funerário” is a late-album highlight. After an ominous symphonic intro, your ears will be greeted with a slow, craggy, titanically heavy riff and then a head-nodding, syncopated drum beat and an equally catchy but even more gruesome riff. There’s d-beat romping in this song as well, plus a brief bass solo, a hard-rocking back-beat, and a buzzing tremolo run (along with the attention-grabbing solos mentioned earlier). 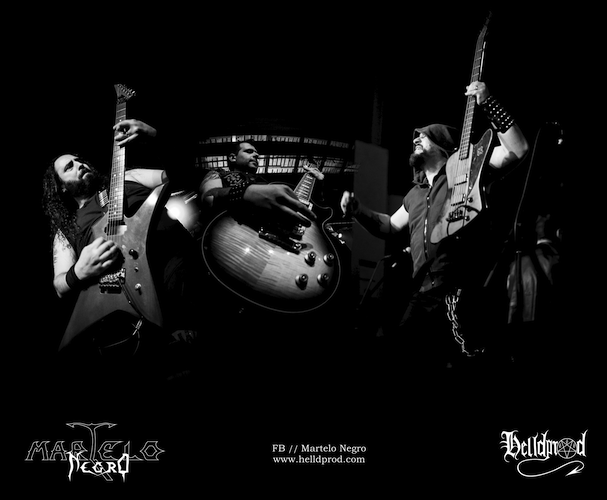 There’s nothing pretentious about Parthenogenesis. It’s aimed at producing a visceral response — and man, does it succeed. You could mangle together a bunch of genre descriptors in attempting to sum it up, but it’s easier to just call it evil-as-fuck heavy metal, and probably more accurate to call it that, too. If you’re looking to get your cranium hammered and your blood pumping like a piston, look no further.

Helldprod Records will release the album in a CD digipack edition limited to 300 copies. Pre-order via the link below.

One Response to “AN NCS ALBUM PREMIERE (AND A REVIEW): MARTELO NEGRO — “PARTHENOGENESIS””