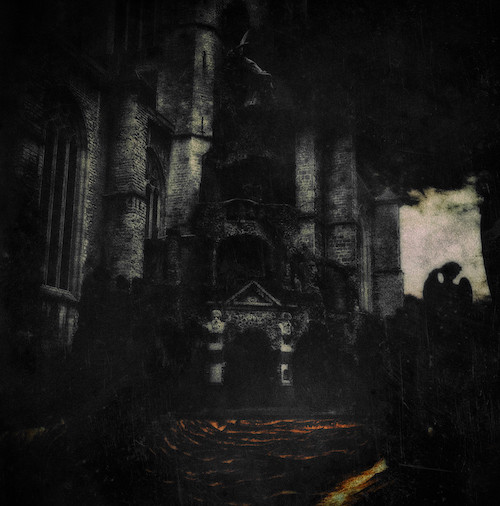 Two main impulses drive the music of Suspiral, and as you read what they are, they might seem incompatible.

On the one hand, they embrace chaos, unleashing terrific storms of gale-force intensity, with waves of blackened death metal slaughtering geared toward mind-rending impact. On the other, they draw influence from Kraut and drone bands such as Ash Ra Temple and Faust in a manner designed to induce trance-like immersion and the gradual accretion of aberrant psychoactive effects, reshaping the mind rather than obliterating it.

These strategies might seem incompatible, but Suspiral manage to unify them, and the experience is perhaps most stunning when they accomplish both things at the same time — as they do on the song we’re premiering today.

The track you’ll be able to stream below is “Crown of Chaos“, which opens their new album Chasm — set for release on May 10th by Sentient Ruin Laboratories in the U.S. and by Clavis Secretorvm in Europe. 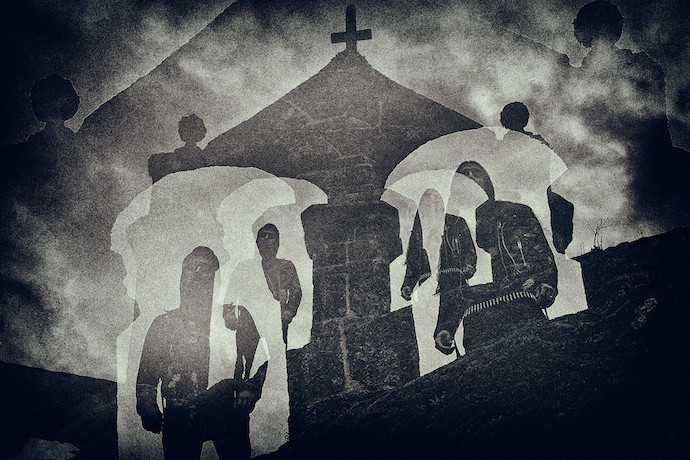 This is the second chance we’ve had to premiere a song by these Galician sonic alchemists. The first time was three years ago, when we debuted one of the three long-form tracks on their first album, Delve Into The Mysteries Of Transcendence, which was released by I, Voidhanger Records. That track (“Poisonous Essence”) included a strange meditative interlude in which the music became ambient and dreamlike, a drift into the void, pierced only by the occasional sound of shimmering cymbals.

“Crown of Chaos” contains no such interlude, but nevertheless creates an unexpectedly mesmerizing effect. Almost relentlessly, the bass and drums thunder, while the cyclonic riffing suffuses the sense with a miasma of swarming sound. The atmosphere is both bleak and brazen — so riotous and unhinged as to be exultant, yet also pitch-black and desolate. Flickering, shrieking, and swirling leads flash out of the pulsating blasts of fanfare chords, like paranormal manifestations of madness and majesty.

Really, everything about the music sounds deranged, including the vocals — a skin-shivering display of bellowing and shrieking, of wretchedness and raging delirium. But the chaos forms a repeating pattern of chanted roars and pulsing momentum, a sequence of storming sensations that begins to practice a terrifying hypnosis — a mesmerizing expression of dangerous lunatic ecstasy. And that’s where the duality of the song becomes apparent: The minutes pass without noticing, as if the arrow of time in its flight has become a blur that can no longer be measured by the clock in your head.

Delve Into The Mysteries Of Transcendence was a remarkable debut. But in Chasm, the two members of Suspiral — A.T. (Sheidim, Black Earth, Krossfyre) and M.S. (Arkaik Excruciation, Sudaria, Scythe) — have become even more daring and unpredictable, achieving even greater mastery over their hybridized form of metallic extremity. There are three other tracks on the album, including two in the 11-13-minute range… and wait until you hear those….

Chasm is available for pre-order now via the links below.

4 Responses to “AN NCS PREMIERE: SUSPIRAL — “CROWN OF CHAOS””