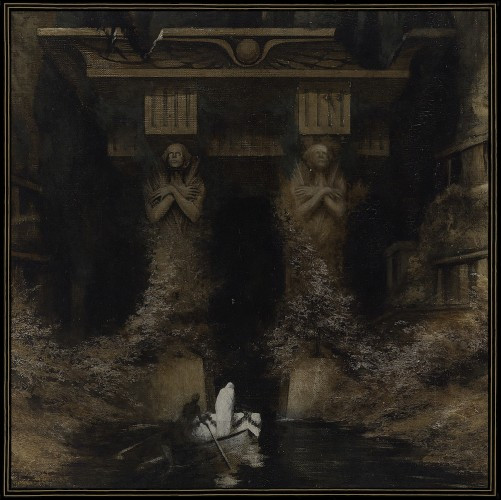 You are about to have a mind-altering experience. It will last almost 13 minutes. In that time, you may feel as if Suspiral have torn apart the membranes that separate our mundane world from dimensions both terrifying and mystical, disorienting and transcendental. It’s a masterful piece of very dark music. Its name is “Poisonous Essence”.

The song is the first of three long tracks that make up the debut album of this Spanish band. It bears the fitting title Delve Into The Mysteries Of Transcendence, and it will be released by I, Voidhanger Records on March 1, 2016.

Many listeners, including myself, approach songs of this length with a certain wariness. You wonder if the time is necessary to accomplish the band’s goal, and whether the time will be well-spent or instead prove to be an exercise in self-indulgence. In this case, the music is so immersive, so richly textured, and so well-constructed that you forget the passing of the minutes. You enter a kind of dream state — but one that’s far from tranquil.

At the beginning, the music engulfs you immediately with swarming riffs, booming drums, and a sky-rocketing lead guitar, and the reverberating bestial vocals come for your throat in an explosion of malevolence. Eventually, the band segue into a more measured rhythm, but the lead guitar performance remains chaotic and pestilential in its aura.

Often dissonant and disturbing, the music continues to twist and turn through labyrinthine pathways, moving from neck-snapping jab-fests to sweepingly dramatic passages that generate an atmosphere of brooding majesty to dense clouds of narcotic fog. Through it all, the lead guitarist spits out shrieking traceries of sound with solos that soar, swoop, and spiral like a demented spirit.

Three minutes from the end, the riveting drum progressions and driving bass-lines come to a halt and the music becomes ambient and dreamlike, a drift into the void, pierced only by the occasional sound of cymbals shimmering. It’s a strange meditative interlude that prepares the listener for one final onslaught of ravaging aggression.

I haven’t yet heard the album’s next two tracks and thus don’t yet know how this one song fits within the album’s entire context. The label explains that the three songs represent “three chapters of transcendence by means of transformation through poisonous elevation, meditation on the sacrificial plane, and the ultimate revelations on the final mysteries of Death.” I’m now tremendously eager for the next two chapters.

The members of Suspiral are M.S. (guitar, voice, fx) and A.T. (bass, synth, voice), and on this album session drums were performed by M.P. (Arkaik Excruciation). The striking cover art is a detail from K.W. Diefenbach’s painting “Toteninsel”. The track list is as follows: