Kneel is the solo project of multi-instrumentalist Pedro Mau from Ponte de Sor in central Portugal, a former member of Kneeldown and Wells Valley. In 2013, with the aid of guest vocalist/lyricist Filipe Correia (Wells Valley, Concealment), Kneel released an album named Interstice, on which Mau was composer, guitarist, bassist, and drummer — and he produced and mixed the record as well.

On May 22nd, the Portuguese label Pulmonary Records will release an updated version of Interstice, which features new mixing and mastering of the music as well as ghostly new cover artwork drawn by Hernan Marin. Today it’s our pleasure to premiere a track from this revamped version of Interstice, a song called “Amend“. It’s a prime example of the visceral, bone-breaking, thoroughly electrifying impact of the music on Interstice. 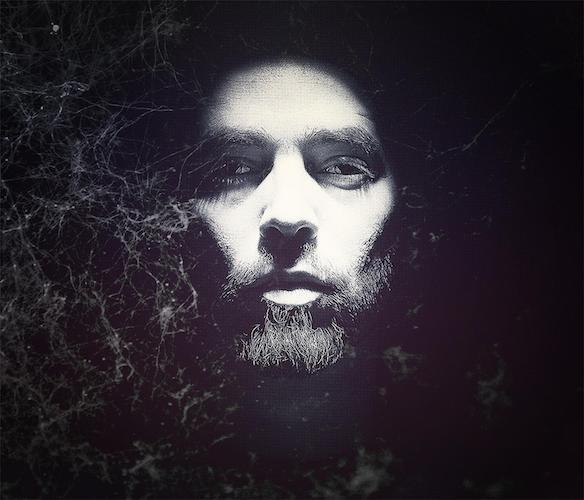 While “Amend” doesn’t fit neatly into any single genre category, you can pick out elements of thrash, hardcore, and mathcore in the music’s rampaging speed, mauling grooves, and fret-leaping guitar work. Almost immediately, the song surges in a rush of battering drums, heavy riffing that pulses and pushes, and scorching hardcore yells. The drumming remains hard-hitting and physically compulsive throughout the song, providing the drive train for blaring chords and jittery, jabbing strings. Fusillades of rapid-fire riff punishment and bursts of destabilizing, angular notes will keep you off-balance, and the unpredictable nature of the music is further revealed in a shrill, wailing melodic motif that surfaces near the end.

Pulmonary Records will release Interstice digitally and in a Digipak CD edition, limited to 100 units. Pre-order via the link below: